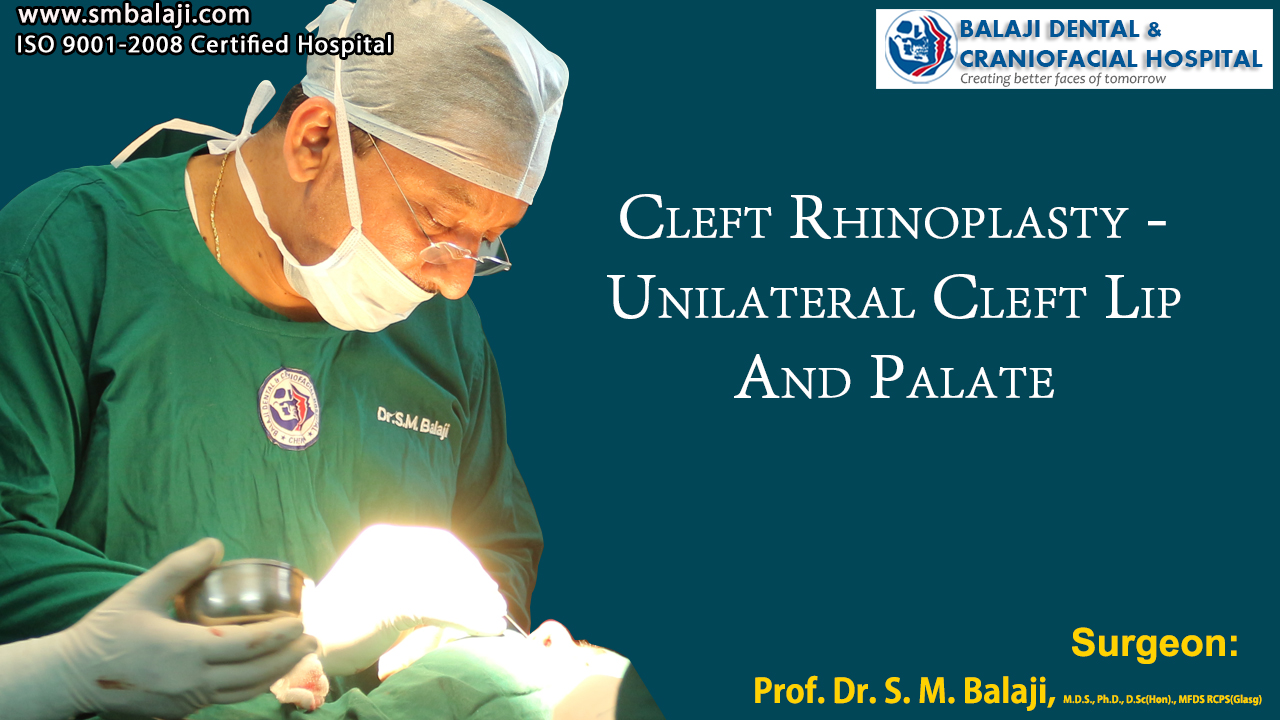 They had referred the parents to a local dental surgeon. He had examined the patient and had referred them to a hospital in a nearby city for surgical correction. Many cleft patients have a split roof of the mouth.

Her parents had presented at the hospital. As instructed by the surgeon, the patient had undergone cleft lip surgery at 3 months of age. This had been followed by cleft palate surgery at 8 months and cleft alveolus surgery at 7-1/2 years of age. She had satisfactory functional and cosmetic results from the surgery.

The patient began noticing the gradual development of a deformity of her nose with time. Her nasal tip was depressed and this too added to the compromise in her facial esthetics. There was also a sunken appearance to her left nostril. Her upper lip however was cosmetically acceptable.

She became very self-conscious about her appearance and became withdrawn. Around two years ago, her worried parents took her to the same hospital for consultation. The surgeon had examined the patient. He then explained that she needed to undergo a closed rhinoplasty procedure or a nose job.

The patient had subsequently undergone nasal deformity correction with the utilization of costochondral grafts. She was however dissatisfied with the results and remained withdrawn. Improper positioning of the graft had led to increased deviation to her nose. This had resulted in increased worsening of the esthetic appearance of her nose.

Her parents made the decision to get this addressed and made extensive enquiries regarding the best treatment options available. They had subsequently been referred to our hospital for her secondary rhinoplasty correction. Our hospital is also a specialty center for revision rhinoplasty.

Initial presentation at our hospital for nasal deformity correction

Dr SM Balaji, the cleft rhinoplasty surgeon, examined the patient and obtained imaging studies. Her nose was depressed on the left side with compromise in both esthetics and function. There was also an asymmetry to the left alar base region. She expressed her desire to have a well-defined and sharp nose.

It was explained to her that an autologous costochondral cartilage graft would be used to augment her nose. The Z-plasty surgery for correction of her alar base region was also explained to her. She was in complete agreement with the treatment plan and consented to surgery.

Surgical correction of her nasal deformity with closed rhinoplasty

Under general anesthesia, an incision was placed over the old incision in the right inframammary region. Costochondral rib graft was harvested from the patient. Following this, a Valsalva maneuver was then performed to ensure that there was no perforation into the thoracic cavity. The incision was then closed in layers with sutures.

A Z-plasty was then performed to correct the depressed and asymmetric left alar base.  This was followed by an intercartilaginous incision to the right nostril with partial excision of the lateral nasal cartilage

Dissection was then done up to the nasal dorsum and the nasal bridge was augmented using the costochondral graft. The closure was done intranasally using resorbable sutures. General anesthesia was then reversed without any complications.

The patient expressed complete satisfaction with the results of the surgery

The patient was very happy with the outcome of the surgery. She now had an elevated and sharp nose that was also symmetrical with a good profile. Her nasal function was also improved. She said that her breathing was unobstructed with free flow of air now.

She expressed that her levels of self confidence have improved significantly after surgery. Her parents too expressed their thankfulness before final discharge from the hospital.