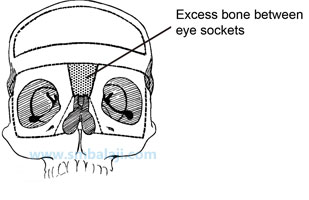 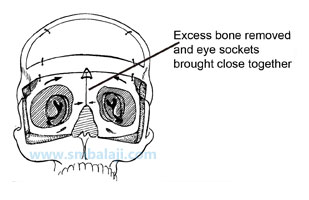 For a normal looking face, the distance between the eyes should be roughly 30 to 35 mm in children. Even slight increase makes a huge difference in appearance. Orbital Hypertelorism is the condition that refers to an abnormally increased distance between the two eyes measuring more than 35 mm in children. In this condition, the eyes are so wide set that the nose appears broad, almost animal like and flat. All the structures that normally occur between the eyes are displaced. Sometimes even the brain is positioned lower, and found hanging between the eyes. This condition occurs since birth and can occur alone or as manifestation of other birth deformities.

Correction of this kind of deformity is routinely carried out by Dr. S.M. Balaji though each case is different and the techniques used for the treatment need to be customized and modified. The deformity can be so severe that such children are isolated and live as recluses and therefore early correction of the deformity is mandatory. But attempting such a complex brain and eye repositioning surgery at such an early age is a colossal challenge. The total correction needs multiple steps but the primary and first stage of bringing the eyeballs to the normal position without any change in vision is the trickiest and challenging.

The technique of moving the eyeballs along with the sockets is called facial bipartition surgery. Dr. Balaji, a pioneer of such surgeries in India says every case poses a different challenge. In this particular case, there was a defect in the floor of the skull holding the brain and therefore extreme care needed to be taken to preserve unprotected brain tissue. Moreover, the child had very small eyes and the upper half of the face was flattened completely due to the lack of growth around the eyes.

The cheekbones were diminutive and set behind. Due to the combined presence of two different deformities, each requiring two different types of surgeries, Dr. Balaji decided to combine two techniques and decided to advance the face while bringing the eyes together. He also modified the technique further to prevent any scarring to the eyelids – by doing the entire surgical cuts through the mouth. This technique was very successful in bringing fullness to the child’s face while setting his eyes in the right place.

A 9-year-old Master Suhail Khan from Cuddappah, Andhra Pradesh, was born with a facial deformity which made his look “different”. He had abnormally wide set eyes, a flat facial appearance and a deformed cleft nose. The distance between his eyes was 50 mm. His very wide set eyes were affecting his normal vision (like bird’s vision). He was referred to Balaji Dental & Craniofacial Hospital for specialized face surgery.

Dr. S.M. Balaji readily took up the challenge to help out the child and his parents in distress. A CT scan taken to gauge the extent of the deformity showed very widely set eye sockets, flattened cheek bones, nasal bone deformity but normal alignment of teeth. 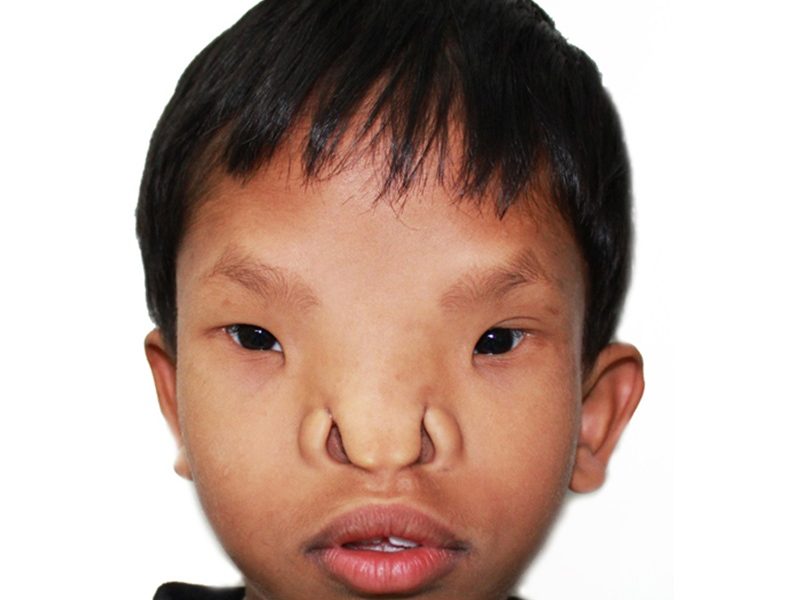 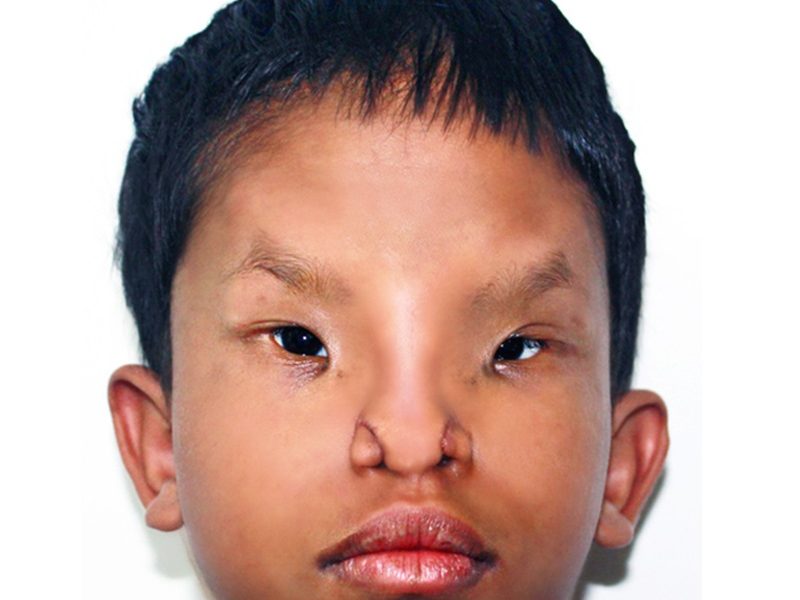 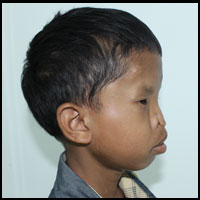 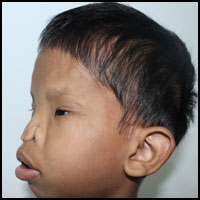 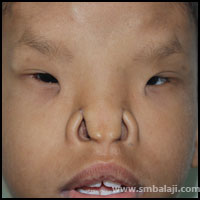 Increased distance between the eyes (50mm while normal is 35 mm) 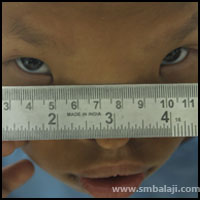 Increased distance between the eyes (50mm while normal is 35 mm)

In Suhail’s case, his deformity was complex requiring the inclusion of the cheekbones within the cuts, thereby avoiding the eyelids; Dr. Balaji approached the three walls through the mouth, avoiding the main, scarring incision of the surgery. This also served both purposes, bringing the eye together while re-contouring the upper half of his flattened face. The Surgical Steps

Under general anesthesia, the scalp was raised to expose the skull bone. The convex portion of the forehead bone was cut, separated, removed and preserved to be replaced at the end of surgery. The midline was marked by fixing the bone on either side of the midline to a horizontal strip of bone just above the eye sockets. Then the eye socket bones and the midface were released from the skull-base. Excessive bone from the region above the upper eyelid, in the midline and along the outer wall is removed.

This was performed with great caution to prevent any injury to the brain tissue and vital nerves and blood vessels of the eye. After the eye bones were brought closer together and bones of the mid-face were rearranged, a second stage surgery was performed. In this, his nose was reshaped giving a more normal contour.

Owing to this innovative technique and remarkably skilled expertise of Dr. S.M. Balaji, Master Suhail Khan’s extremely wide set eyes have been brought together in to a more normal position and his nose is reshaped. For the first time such a surgery has been improvised for greater benefit and excellent results. The child’s recovery was uneventful. His vision is normal.

An eight year old girl with a similar birth defect was referred from Seychelles to Balaji Dental & Craniofacial Hospital. She was born with cranial synostosis with Plagiocephaly (flattening of cranial bones) and hypertelorism (far apart placed eyes “birds eye” and absence of binocular vision – like humans).

In a complex surgery, her skull bones were exposed, by making a 360° bony cut her eye socket bones were brought closer and fixed using bone plates. Now her eyeballs are in a more normal position. She will need nose correction surgery after about 3 to 4 years. 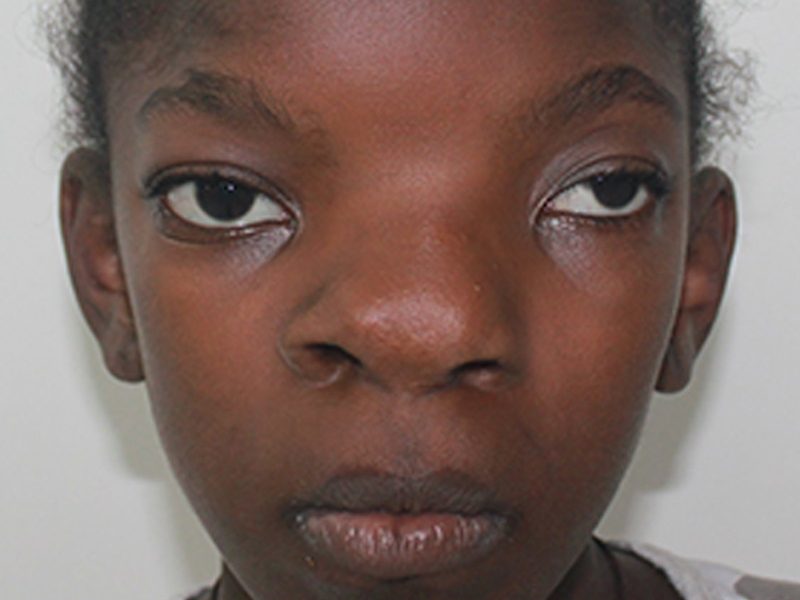 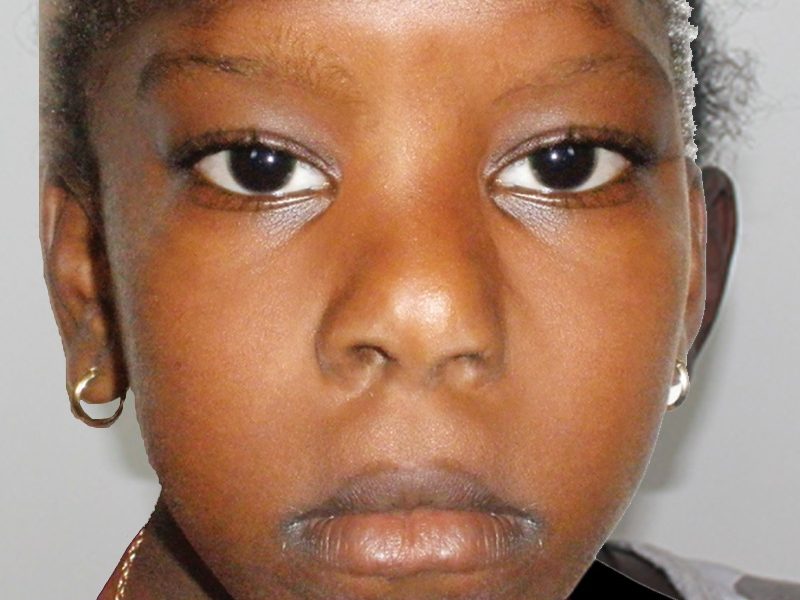