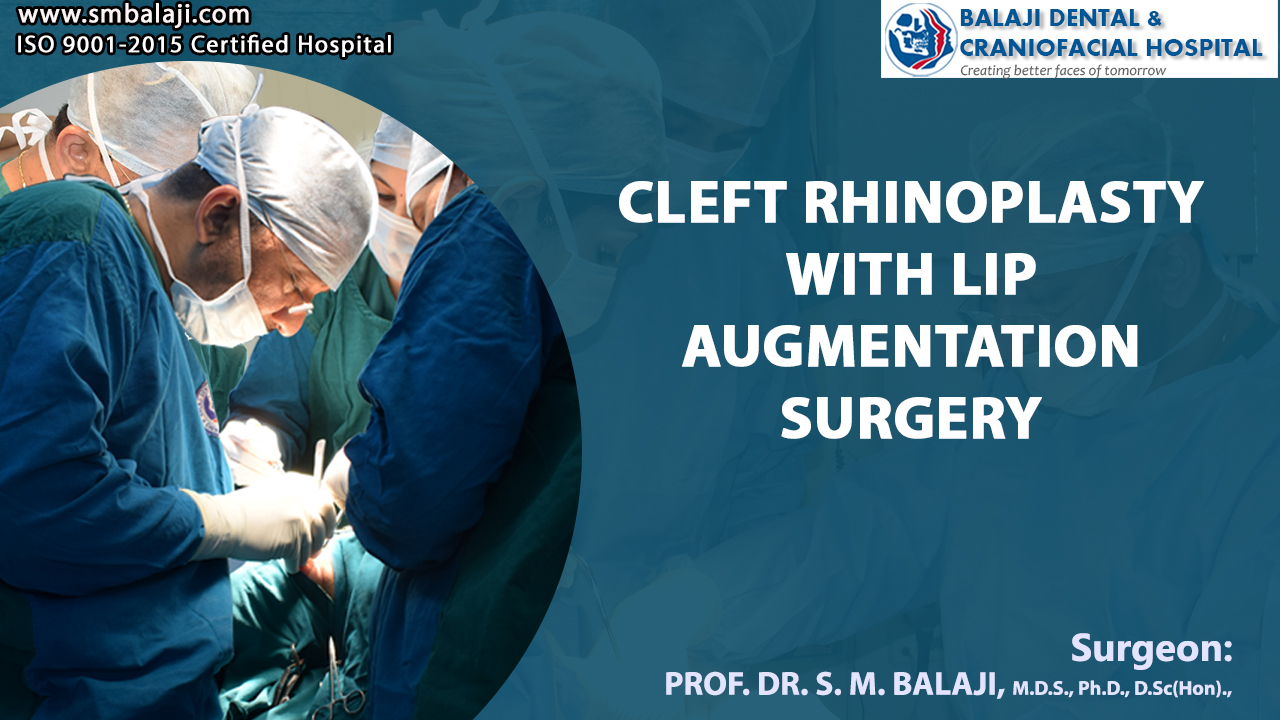 The patient is a 25-year-old female from Mahabalipuram in Tamil Nadu, India. She was born with a unilateral cleft lip and palate. Doctors at that hospital had explained the condition in detail to her parents. They were counseled that surgical correction needed to be done at the right time for this condition.

Over time, the patient slowly developed a crooked nose deformity. The tip of the nose was flattened. She also felt that the scar from the previous surgery was unsightly and her lip was very thin. This had caused her to become depressed.

She had stopped going to work or visiting with friends and relatives. Her looks distressed her and she kept to herself all the time. Her parents decided to get this corrected surgically and visited the original surgeon. They explained that she desired lip deformity surgery and nose augmentation surgery. She said that she wanted a nose job.

Referral to our hospital for surgical management

Upon examination, the surgeon realized the complexity of the correction involved and referred her to our hospital for management.. Our hospital is renowned for nose deformity surgery and lip augmentation surgery. Facial reconstruction surgery is also a specialty at our hospital. Rhinoplasty surgery is performed on hundreds of patients  each year with glowing patient testimonials.

Dr SM Balaji, cosmetic nose surgeon, examined the patient. He ordered comprehensive imaging studies for the patient. The patient had a unilateral cleft lip on the left side. This had led to development of a facial deformity on that side.

The left side of her nose was depressed and her nose was deviated to the right side. She also had a loss of musculature on the upper lip with an unsightly scar. The depressed nose also resulted in chronic breathing difficulties for the patient. There was also a component of snoring.

The patient desired to have a prominent symmetrical nose that was in harmony with the rest of her face. She also wanted to have the scar on her upper lip removed along with bulking up of the thin lip. She said that the depression on the left side of her nose was making her feel dejected.

Treatment planning was formulated for the patient. It was explained to the patient that scar revision surgery would be performed on the upper lip followed by nose correction surgery. Bulking up of the lip would be through placement of a fascia lata graft harvested from the patient’s thigh. The patient was in agreement with the treatment plan and consented to surgery.

It was explained that she would need to stay indoors for a week after surgery. The patient expressed understanding that success of the surgery also depended on good postoperative wound care. The patient would be undergoing a closed rhinoplasty as an open rhinoplasty would result in a visible scar.

Successful surgical correction of the deformities

Under general anesthesia, a fascia lata was first harvested from the patient’s thigh. This was followed by the scar revision surgery through a Z plasty technique. A transcartilagenous incision was next made in the right nostril and dissection was done. The lateral nasal cartilage was excised partially.

This was followed by a medial and right lateral osteotomy to straighten the nose. Finally, the harvested fascia lata graft was tunneled into the upper lip to bulk up the thin lip. The lip was now in harmony with the rest of her facial features.

The cosmetic transformation as a result of the surgery was immediate. There was complete symmetry to the nose and no visible scar to the lip. The fullness to the lips was also in complete harmony to the rest of the face. She said that she would now be able to face the world with a new found confidence as a result of