Le Fort I for Hypoplastic Maxilla and Dental Implant Surgery

Le Fort I for Hypoplastic Maxilla and Dental Implant Surgery 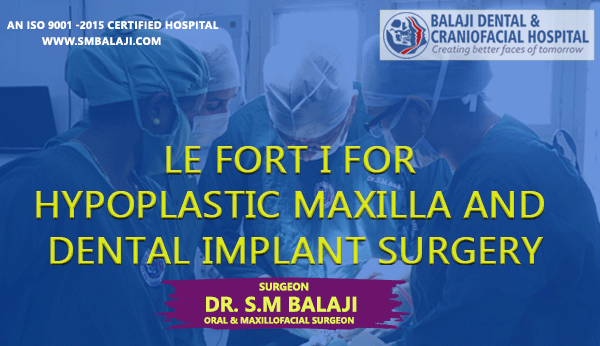 The patient is a 16-year-old male from Ankleshwar in Gujarat, India. He had been born with facial deformity comprising of bilateral cleft lip, palate and alveolus. This had resulted in him having a split maxilla. There was a communication to the nasal cavity at the roof of the mouth.

They had then been referred to us by the dental surgeon. Our hospital is renowned for cleft lip and palate surgery in India. We are recognized as a regional affiliate of the International Cleft Lip and Palate Foundation (ICPF) of Japan. This surgery is mainly performed by Oral and Maxillofacial Surgeons in India. Plastic surgeons also perform this in countries like the US and European countries.

The patient had undergone cleft lip surgery at 3 months and cleft palate surgery at 9 months in our hospital. This had been followed by cleft alveolus repair at 3-1/2 years of age. Both cosmetic and functional results from the three surgeries had been optimal. He had been referred to a speech pathologist for speech training and had developed good speech patterns.

The patient had met all his developmental milestones appropriately. He was able to feed well and his speech development was also normal. However, as her grew older, his maxillary growth was deficient with resulting backwardly placed upper jaw.

This made it very difficult for him to eat and he felt that it was compromising the esthetics of his face. He had an anterior skeletal crossbite. This had caused significant esthetic compromise to his facial appearance.

His parents had presented back to our hospital for correction of this problem. He also had a hypoplastic maxillary left central incisor and missing lateral incisor. He had undergone bone grafting at 11 years of age. This was to create adequate bony support for placement of an implant at the site of the missing tooth.

Patient presents at our hospital with his parents

Dr SM Balaji, facial reconstruction surgeon, examined the patient and ordered comprehensive radiological studies for the patient including a 3D CT. Clinical examination revealed an anterior maxillary crossbite. The maxilla was also backwardly placed and with a narrow arch. His 3D CT revealed a split maxilla with maxillary hypoplasia.

Maxillary hypoplasia is caused by underdevelopment of the maxillary bones, which produces midfacial retrusion and creates the illusion of mandibular prognathism. It is associated with Crouzon syndrome and Angelman syndrome as well as fetal alcohol syndrome. This is also a feature of many patients with repaired cleft lip and palate deformity. A rarer etiology for this deformity is traumatic maxillary dental extractions.

It was explained to the patient that his retrognathic maxilla would be advanced through a Le Fort I procedure. The maxillary segment would be stabilized using titanium plates and screws. His split maxilla would be brought together.

This would be followed by extraction of the malformed central incisor and placement of dental implants for the two incisors. The patient was in agreement with the proposed treatment plan and consented to surgery.

Under general anesthesia, a crevicular incision was made in maxilla followed by elevation of a mucoperiosteal flap. Extraction of the left central and lateral incisors was then performed followed by implant placement at the extraction site.  This was followed by Le Fort 1 bone cuts to the maxilla and the maxilla was downfractured. The maxillary segment was then pulled outwards and checked for occlusion.

Once occlusion was deemed to be adequate, the maxillary segment was fixed using titanium plates and screws. Closure of the incision was then done using resorbable sutures. Outcome of the surgery was as planned and the maxilla was now normally positioned in relation to the mandible.

Patient expresses his satisfaction at the results of the surgery

The patient and his parents will return in three months for placement of ceramic prostheses on the implants. They expressed their thankfulness before discharge from the hospital.