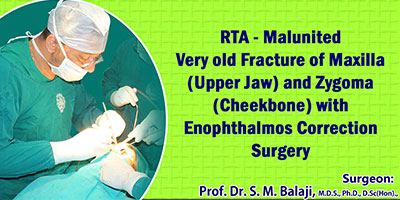 This young man from Indore, Madhya Pradesh, was riding his bike when he collided with a car 1.5 years back. He suffered facial fractures involving the maxilla, zygoma and orbital region. The patient underwent surgical correction at a local hospital after the accident. This surgery left him with residual deformities. These included an anterior crossbite and a sunken right zygoma with enophthalmos.

The patient presents to our hospital for specialized facial deformity correction

Dr SM Balaji, facial deformity correction specialist, examined the patient. He ordered 3D CT scan and other imaging studies. There were many plates seen from the previous surgery. The maxilla was in a retruded position. He recommended advancing the maxilla forward with a Le Fort I osteotomy for crossbite correction. Other recommended surgeries were refracture of the zygoma with plate fixation. Release of herniated fat trapped in the right eye with Titanium mesh placement was also recommended for enophthalmos. The patient consented to surgery.

Under general anesthesia, a buccal vestibular incision exposed the old maxillary plates. These were then removed and the maxilla advanced forward with a Le Fort I advancement osteotomy. This resulted in correction of the anterior crossbite. Four L-shaped four holed plates were utilized to achieve this.

Enophthalmos and zygomatic depression correction done for the patient

The zygoma was then refractured and repositioned with new plates. This resulted in correction of the depressed zygoma. The enophthalmos was then addressed. A Titanium mesh with Medpor was used to correct it. The Titanium mesh was then fixed with screws to the lower orbital rim. All incisions were then closed with sutures and the patient extubated.

The patient expressed complete satisfaction at the results of the surgery before final discharge.