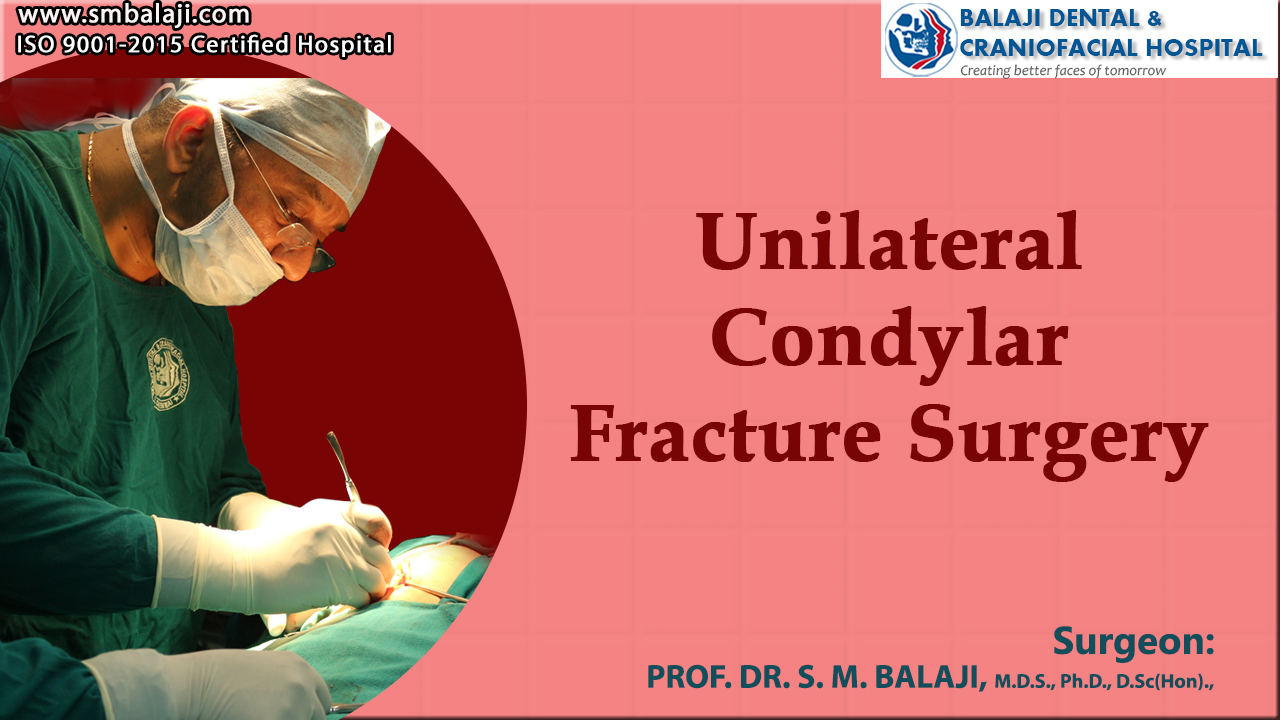 The patient is a 24-year-old male from Surat in Gujarat, India. He had been involved in a road traffic accident while riding his bike. A collision with another two wheeler had resulted in his motorcycle skidding and he had landed hard on his chin. This had immediately resulted in difficulty opening his mouth and speaking.

His parents had taken him to a local hospital where emergency treatment was administered. Wound debridement had been done for his superficial lacerations along with dressing. An x-ray taken at the hospital revealed a left-sided condylar fracture.

The radiologist had explained to the patient that this needed to be addressed surgically at a specialty center. Due to its complicated presentation, the patient had been referred to our hospital for surgical management.

Initial presentation at our hospital for treatment planning

Dr SM Balaji, mandibular fracture surgeon, examined the patient and ordered an orthopantomogram and 3D CT scan to visualize the fracture. The patient was in a considerable amount of pain and had difficulty opening his mouth. He also had vertical shortening of the lower face along with a posterior open bite. There was also mild facial asymmetry with deviation of the mandible to the left side. Both the OPG as well as the 3D CT scan clearly revealed a displaced left-sided condylar fracture.

It was explained to the patient that he needed condylar fracture surgery with open reduction and internal fixation along with plating to stabilize the fracture. He would also be placed in Intermaxillary fixation to promote healing of the fracture site. The area of the stylomastoid foramen in the temporal bone was not involved in the fracture.

A liquid diet would be needed during the period of Intermaxillary fixation, which would be for a period of 2-3 weeks. This would be followed by a period of semi-solid diet. The patient and his parents were explained the rationale behind the treatment planning and consented to surgery.

Under general anesthesia, a modified Alkayat-Bramley incision was made on the left side of the face. This was just anterior and superior to the pinna of the ear. A flap was then elevated and dissection was carried out until the fracture site was identified. The displaced condylar fracture was then reduced followed by a check for normal occlusion.

Once it had been determined that the fracture had been adequately reduced, it was then fixed using titanium plates and screws. Extreme care was taken to ensure that the facial nerve was adequately protected throughout the procedure. Intermaxillary fixation was applied to the jaws and the patient was instructed to follow all the postoperative instructions. The patient demonstrated full function of the facial nerve in the immediate postoperative period including furrowing of the brow and eye movements. Bite was also normal.

Patient satisfaction at the results of the surgery

The patient returned after a period of two weeks for removal of his Intermaxillary fixation. Facial asymmetry had been reestablished and there was no difficulty with opening his mouth. Pain was also absent and the patient demonstrated full facial nerve function without any compromise. Parotid gland function was also completely normal. There was no alteration in the taste sensation.

The patient and his parents were very relieved that he had gained complete function without any sequelae from his road traffic accident. They expressed their complete satisfaction at the results of the surgery.