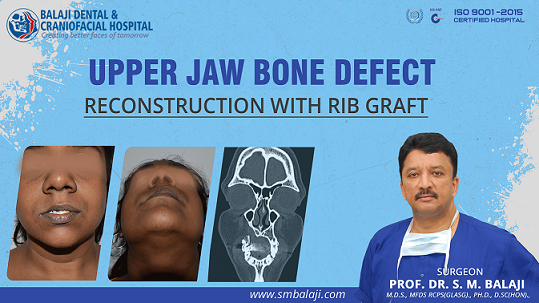 The patient is a 24-year-old female from Nanguneri in Tamil Nadu, India. Over a period of two years, she had begun to notice a slow growing swelling in the maxillary right incisor region. Since there had been no pain or discharge associated with it, she had ignored it for a long time. It was firm to the touch and not painful.

Some of her neighbors soon began commenting on the subtle change in her facial structure. It was only then that she decided to seek medical opinion for her upper jaw bone defect. Her parents had been referred to a nearby city hospital by some well wishers.

A biopsy had been obtained by the oral surgeon, which revealed a diagnosis of benign ossifying fibroma. He explained that this needed to be excised. Teeth in the involved region would be extracted. Artificial teeth would be placed once the surgical site had healed. The patient was particular that she did not want a removable denture.

This arises from the periodontal ligament and can be considered to be a benign neoplasm. There is expansion of the overlying cortical plates. Perforation of the overlying structures is never seen due to the slow growing nature of the lesion. Differential diagnosis includes reactive hyperplasia

The patient underwent excision of the lesion along with extraction of the overlying right central and lateral incisors and the right canine. After a period to allow for complete healing of the surgical wound, the patient was referred to a prosthodontist. Rehabilitation was completed by constructing a bridge to replace the three extracted teeth.

The patient however was not happy with her postoperative appearance. She felt that her right alar base and lips had a sunken appearance. There was also food impaction in the region above the bridge, which was causing halitosis. The patient desired correction of her complaints.

She therefore presented with a general surgeon who obtained imaging studies. Seeing that the bony defect was very large, he counseled her to approach an expert oral and maxillofacial surgeon. The patient made enquiries and was referred to our hospital for management.

Dr SM Balaji, jaw reconstruction specialist, examined the patient and obtained imaging studies. This revealed that the patient had a defect of around 14 mm. He explained to the patient that rib grafts needed to be harvested for filling in the jaw defect. This would be followed by placement of dental implants to complete rehabilitation for the patient.

Under general anesthesia, an inframammary incision was made and rib grafts were harvested. A Valsalva maneuver was then performed to ensure that there was no perforation into the chest cavity.

Attention was next turned to the region of the maxillary bony defect. A mucogingivoperiosteal flap was raised to expose the defect. The rib bone graft was then crafted to perfectly fit into the bony defect.

These were then fixed in place with titanium screws. Hemostasis was checked and the flap was closed with sutures.

Bony consolidation of the grafts to the surrounding alveolar bone would take up to four months. The patient was therefore instructed to return after four months for dental implant surgery. She expressed understanding of the instructions and thanked the surgical team before discharge from the hospital.