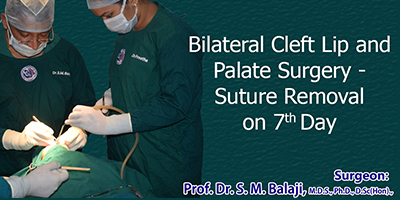 This is a 2-month-old baby girl from Bahrain was born with bilateral cleft lip and palate. Her parents were referred to Balaji Dental and Craniofacial Hospital, by a close friend of theirs whose daughter had been operated upon by Dr. Balaji with very good results. Dr. S. M. Balaji, Maxillo-Craniofacial Surgeon, explained to them that the goal of this primary surgery is to recreate the lip seal. The parents consented and the child was scheduled for surgery. A modified Black’s technique cleft lip repair was done.

Seven days after the surgery, the parents presented with the baby for removal of sutures. There was very good approximation of the vermillion, structural appearance of the columella and nice overall appearance to the nose. She was taken to the operating room where the sutures were removed. There was very negligible scar formation and the final appearance of the baby girl was good with satisfactory functional outcome. It was explained to the parents that subsequent phased surgeries will have to be done for correction of the other defects.