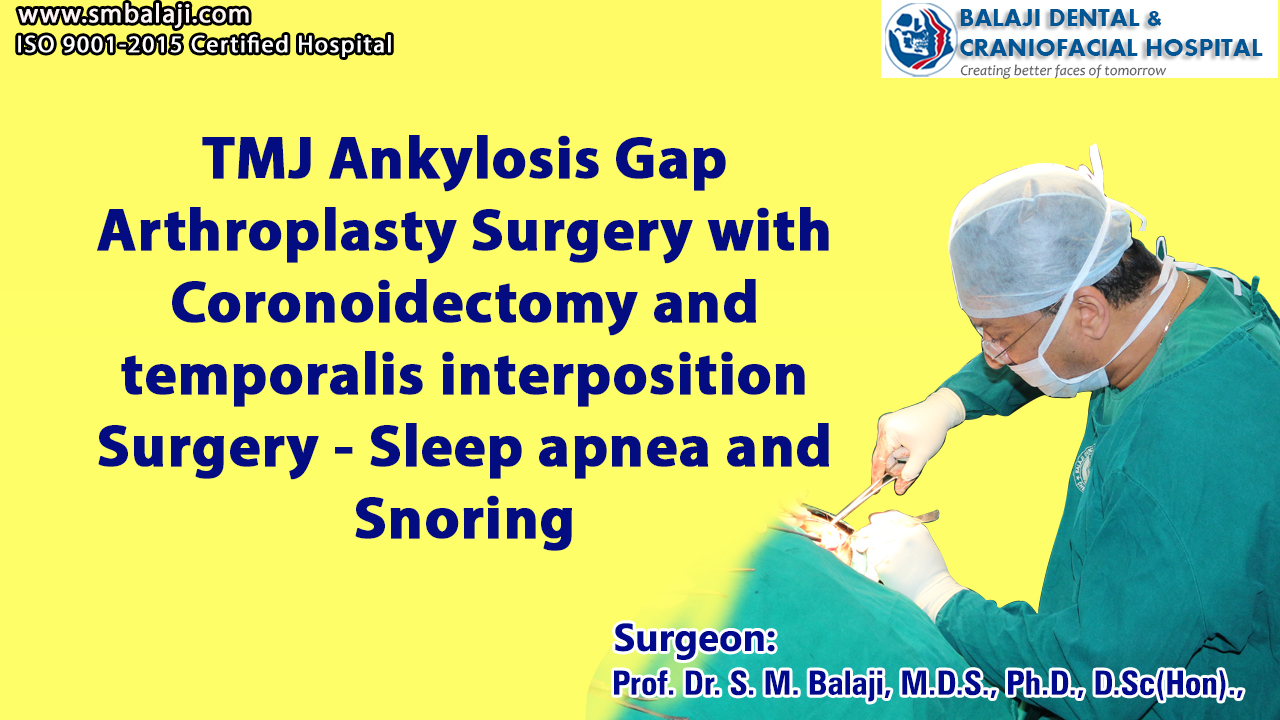 This young lady was involved in a road traffic accident many years ago in her hometown. First aid had been administered immediately after the accident, but a minor injury to her right TMJ went undiscovered at that time because there were no good diagnostic facilities in her hometown. This resulted in ankylosis of her right TMJ with resultant retarded growth of the mandible on the right side with deviation of the mandible to the right. She developed snoring and sleep apnea over the years and this had now been troubling her for a long time. She had undergone ankylosis release surgery multiple times elsewhere but without much success. Her parents finally brought her to Balaji Dental and Craniofacial Hospital, Teynampet, Chennai, for definitive surgical correction.
Dr. S. M. Balaji, Cranio-Maxillofacial Surgeon, examined the patient and ordered diagnostic studies including a 3D axial CT scan. A diagnosis of right-sided ankylosis of the TMJ was made and he explained the surgical procedure in detail to the patient and her parents. They were in complete agreement with the proposed treatment plan and the patient was scheduled for surgery.

The patient was taken to the operating theatre. Anesthesia was administered via fiberoptic nasal intubation because of the patient’s inability to open her mouth. This was done to avoid performing a tracheostomy. A submandibular incision was then made just below the margin at the angle of the mandible on the right side to access the TMJ and a gap arthroplasty was performed. The ankylosis was released and a temporalis muscle interpositioning procedure was performed to prevent reankylosis of the joint to the glenoid fossa. Attention was next turned to the left side where the coronoid process was accessed through an intraoral approach. A coronoidectomy was performed to negate the action of the left temporalis muscle and enable increased mouth opening. Full mouth opening was established at the end of the procedure. The incisions were closed with sutures and the patient recovered uneventfully from general anesthesia.

The joint was mobilized within a week’s time and the patient was able to slowly begin eating solid foods again. She did not demonstrate any sleep apnea or snoring after the surgery while in the hospital. The patient and her parents expressed their happiness at the results of the surgery before being discharged from the hospital.