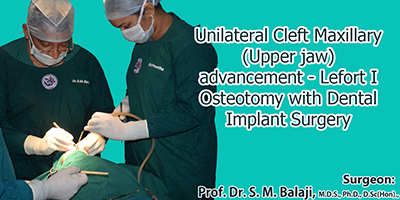 Attention was next turned towards the LeFort I osteotomy of her maxilla. A gingival mucoperiosteal flap was first raised up to the buccal sulcus. A LeFort I osteotomy was then performed. The entire maxilla was then advanced by 2-3 mm. This resulted in establishment of a Class I occlusion along with correction of her anterior crossbite. The maxillary segment was then stabilized in position with the use of three plates with four screws to each plate. This would aid in stability of her plates during the healing period. Her occlusion was then checked and the teeth were found to be in perfect alignment. The flap was then sutured in place. She recovered well from general anesthesia and was in stable condition.

The patient was very happy with the results of the surgery and expressed the same to Dr SM Balaji.
Surgery Video