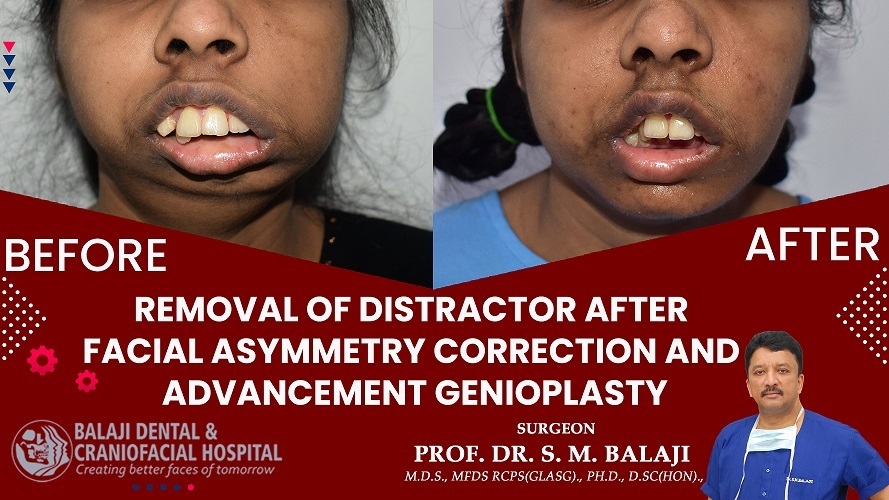 This 24-year-old girl from Malappuram in Kerala suffered an injury to her jaw as a child. Her parents did not present her to a doctor as the pain subsided within two days. They soon began noticing a developing jaw deviation to the left as time passed.

This worsened to the point where people began commenting on it. All the negative attention affected her social life. She also began complaining of difficulty with eating and speech.

Failure of Initial Surgical Correction in her Hometown

Realizing that she needed treatment, they presented to a surgeon in their hometown. He recommended surgical correction of her diagnosis of unilateral TMJ ankylosis. She had undergone surgery, which was a failure. There was also altered taste sensation after the surgery.

Despairing at the turn of events, her parents had sought the help of a family friend. Being a medical professional, she had made inquiries into the best treatment facility. She then referred them to us as our hospital is a specialty TMJ treatment center.

Center of Excellence in Oral and Maxillofacial Surgery

Our hospital is a premiere center for facial deformity correction. We are an international center for cleft lip surgery and cleft palate surgery. Children with clefts find a new lease of life at our hospital. There is a hole in the roof of the mouth in cleft palate children.

Our hospital boasts of a state of art facial trauma surgery unit. Syndromic craniofacial deformity correction offers a new lease of life to many patients. Autologous bone grafts are a vital component for such surgeries.

Treatment Planning Explained in Detail to Patient and Parents

Dr SM Balaji, TMJ Ankylosis Surgeon, examined her and obtained imaging studies. She had a pronounced jaw deviation to the left with a skewed occlusal cant. He explained to them that the altered taste sensation was due to nerve damage.

The previous surgery was a failure on all fronts. Left TMJ ankylosis was still very much present. This would also need corrective surgery at our hospital. We are a specialist center for TMJ surgery.

Anesthesia would be through bronchoscopic intubation because she had minimal mouth opening. The first step of her rehabilitation would involve gap arthroplasty of her ankylosed joint. This would involve interpositioning of temporalis muscle to prevent relapse.

The next step would be distraction osteogenesis of her mandible and Le Fort I of her maxilla. This would correct her jaw deformity and skewed occlusal cant. Advancement genioplasty was also planned along with this.

There would be no chin implants in this case. Soft tissue profile would improve with this surgery. A retruded chin detracts from the structure of the chin.

She underwent successful completion of the first two steps of her surgical correction. Ankylosis release resulted in good movement of her mandible. Distraction of 12 mm performed at a rate of 1 mm a day corrected her jaw deformity.

Chin advancement surgery resulted in great improvement to her facial esthetics. They were then advised to return in four months for distractor removal.

They returned for distractor removal during the ongoing COVID-19 pandemic. Our hospital has always prided itself on giving prime importance to patient safety. Latest technology for safety instilled in the hospital ensured zero risks for everyone.

Imaging studies obtained revealed good consolidation of new bone at the distracted site. The distractor was then removed. She had good occlusion along with correction of her skewed occlusal cant. Fixed orthodontic treatment would ensure complete correction of her dental malalignment.

She and her parents expressed their gratitude to the surgical team. They said that she felt like a new person following the surgical jaw correction.