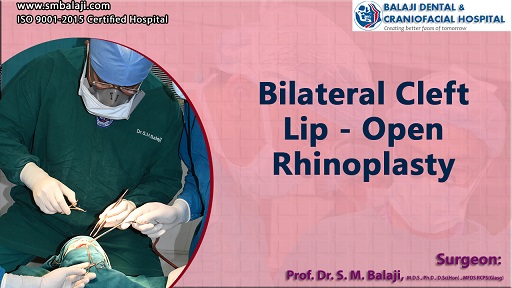 The average cost for open rhinoplasty ranges from  75000 INR to 2,00, 000 Indian Rupees.  This depends upon the complexity of the deformity.

What is Open Rhinoplasty?

Open rhinoplasty, also referred to as external rhinoplasty, is done by making a small incision on the columella, the soft tissue that divides the nose. When under general anaesthesia or twilight sedation, this procedure provides clear access to the underlying bone and cartilage structure. The primary advantage of the open technique is the increased precision for reshaping the nose frame to achieve the desired contouring. The accessible technique is better used when contemplating the revision of the rhinoplasty since the original structure of the nose has already been disrupted.

Dr. SM Balaji can also use an open technique when the patient’s nose is crooked or when the nasal tip projection is significantly reduced (how far the tip sticks out from the face). The open rhinoplasty approach allows for a clearer view of the changes that need to be made, as well as precision and ease of intricate suture and/or grafting. The scar left behind is barely visible and usually disappears over time.

Patient Undergoes Cleft Lip and Palate Surgery as an Infant

The patient is a 19-year-old woman from Ballari in Karnataka, India. She was born with a cleft lip and palate deformity. Her parents had presented to a surgeon in their hometown for corrective surgery. There had always been excessive scarring at the site of surgical repair.

Excessive Scar Formation at the Site of Surgery

The deformity had worsened as she grew older. She had faced considerable bullying while in school and college. These difficult circumstances had made her an introvert. She had very few friends.

There is also an issue of a lack of confidence because of these deformities. The hole in the roof of the mouth had been corrected at the time of initial surgery. Plastic surgeons also perform cleft repair surgery in Western nations. Oral and maxillofacial surgeons also perform facial cosmetic surgery.

It had now worsened to the point where she refuses to leave the house. Her distraught parents decided to get this addressed and consulted family and friends.

They conducted exhaustive Internet research to zero in on the best treatment available. Their search led them to our hospital. They contacted our hospital manager and fixed an appointment for a consultation.

Our hospital is a premiere center for facial plastic surgery in India. We specialize in correcting deformities associated with cleft lip and palate defects. We are the regional affiliate of the US-based World Craniofacial Foundation. Orthognathic surgery also results in cosmetic improvement of the face.

Patients from around the world undergo full rehabilitation of craniofacial defects with us. We are a leading center for cleft lip surgery and cleft palate surgery.

Initial Examination and Treatment Planning at our Hospital

Dr. SM Balaji examined her and obtained a detailed history. She had severe scarring of the prolabium. There was an obtuse nasal tip along with an absence of the columella. Her alar base was very broad.

Treatment planning included the creation of a columella using prolabial tissue. The resultant prolabial defect would be then reconstructed using a flap from the lower lip.

He spent time counseling the patient and her parents about what to expect from surgery. It was explained to them that this was a two-step surgery. They were in agreement with the treatment plan and she consented to undergo surgery.

Markings were first made for a lower lip Abbe flap. A prolabial flap was then raised. An open rhinoplasty was next performed followed by osteotomy of the nasal bone and rearrangement of nasal cartilages. The prolabial tissue was used to recreate the collapsed columella.

She and her parents were very pleased with the results of the surgery. There was a tremendous improvement in her facial esthetics. They expressed that she would gain increased levels of self-confidence to face life again.