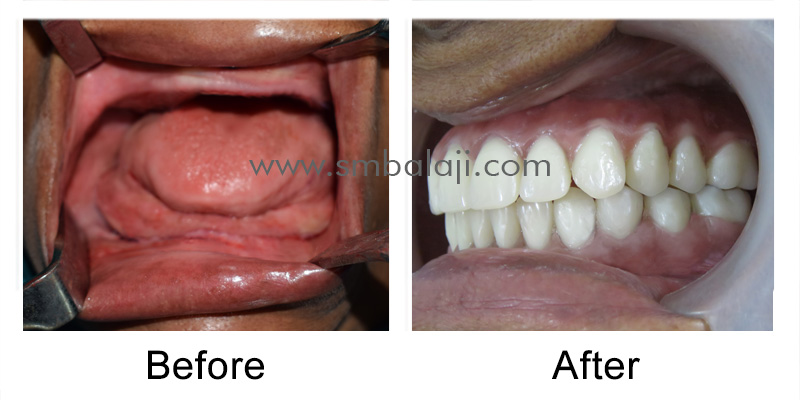 A 60 year old female patient approached our dental hospital with a complaint of mobile prosthesis in her upper and lower jaw.  Patient had a history of long standing mobile teeth due to debilitating periodontal pathology, following which she had undergone extraction of all her teeth. The patient said that she remained without teeth for a period of 2years. Later she had replaced her missing teeth with an implant-supported prosthesis done elsewhere. Patient stated that the prosthesis had been fixed in just a week after the implant placement.

Within one month of having the prosthesis fixed, she started to experience pain and discomfort in the gum tissue surrounding the prosthesis in both upper and lower jaws. Subsequently, the prosthesis exhibited mobility. Also she grumbled upon the salty tasting liquid discharge from her gums. Due to the above reasons the patient was struggling to chew food. She was very upset with her oral health. She worried that the mobility would progress more if left untreated. She was desperate to get rid of the shaking prosthesis. Patient had no history of diabetes mellitus or any other adverse habits.

On clinical examination, the gums surrounding the implant prosthesis were swollen and tender on palpation. There was evident pus discharge and bleeding on examination. The implants in the upper and lower jaw exhibited mild mobility depicting a condition called ‘peri-implantitis’.

“Peri-implantitis is an infection of the soft and hard tissues surrounding an osseointegrated implant, leading to the loss of supporting bone.”

Pre-operative x-ray taken shows diffuse radiolucency around the implants in the upper and lower jaws indicating severe bone loss, owing to the mobility of the implants.

On view of the patient’s condition and insistence of the patient, Dr. SM Balaji planned to remove the failed dental implants along with the prosthesis under local anesthesia, to relieve the patient from suffering further. Followed by replacement of missing teeth with removable denture.

Under local anesthesia the prosthesis in the upper and lower jaws were removed along with the infected dental implants. Patient was put on antibiotics to decrease the infection and to aid the healing of the gum tissues. Later Impression was taken and removable upper and lower dentures were delivered to the patient to replace her missing teeth temporarily.

The patient returned after 4 months for review. The patient stated that she was not able to relish her meals, as the upper denture covered the palate. Although patient was managing with the removable dentures, she was insisting for a fixed option by which we could replace her missing teeth.

OPG taken shows insufficient bone height in the upper posterior region, to support the conventional dental implant. With regard to the patient’s oral condition and need, Dr.S.M.Balaji decided to perform a graft less technique under general anesthesia, by anchoring the upper posterior dental implants in the zygomatic bone (cheek bone) and with additional conventional dental implants where there is sufficient bone, under general anesthesia thereby providing a brilliant alternative for teeth replacement.

For severe bone resorption, zygomatic implants are excellent treatment of choice, as it would shorten time and lengthy treatment procedure involved in bone grafting techniques. Zygoma bone provides great stability and retention for the dental implant. It aids in high primary stability for immediate function.

The surgical procedure was clearly explained to the patient and consent was obtained.

Under general anesthesia, the gum tissue is cut and elevated in the upper and lower jaw bone exposing the underlying bone. Followed by this a small oval window is cut open in the right upper lateral wall of the sinus close to the zygomatic bone (cheek bone). A membrane is exposed on the other side of the bone which acts as a barrier between the sinus and the jaw.

The patient was put on medication for 5 days to cope up with the mild pain and discomfort. Home care instructions were given. Patient was asked to report after 6 months for final prosthesis. This duration is for the dental implants to completely osseointegrate with the jaw bone. Meanwhile, patient was given a light weight provisional prosthesis.

Patient reported after 6 months. Post-operative OPG taken shows zygomatic implants and conventional implants, well integrated and positioned in the jaw bone. Final impression was taken. After a couple of bite trials ensuring no traumatic bite, natural looking fixed hybrid prosthesis was fixed onto the dental implants. There was an immediate remarkable change in the patient’s speech and appearance which boosted her confidence. The patient and her family members were very happy with the outcome. Patient is on a regular follow up.