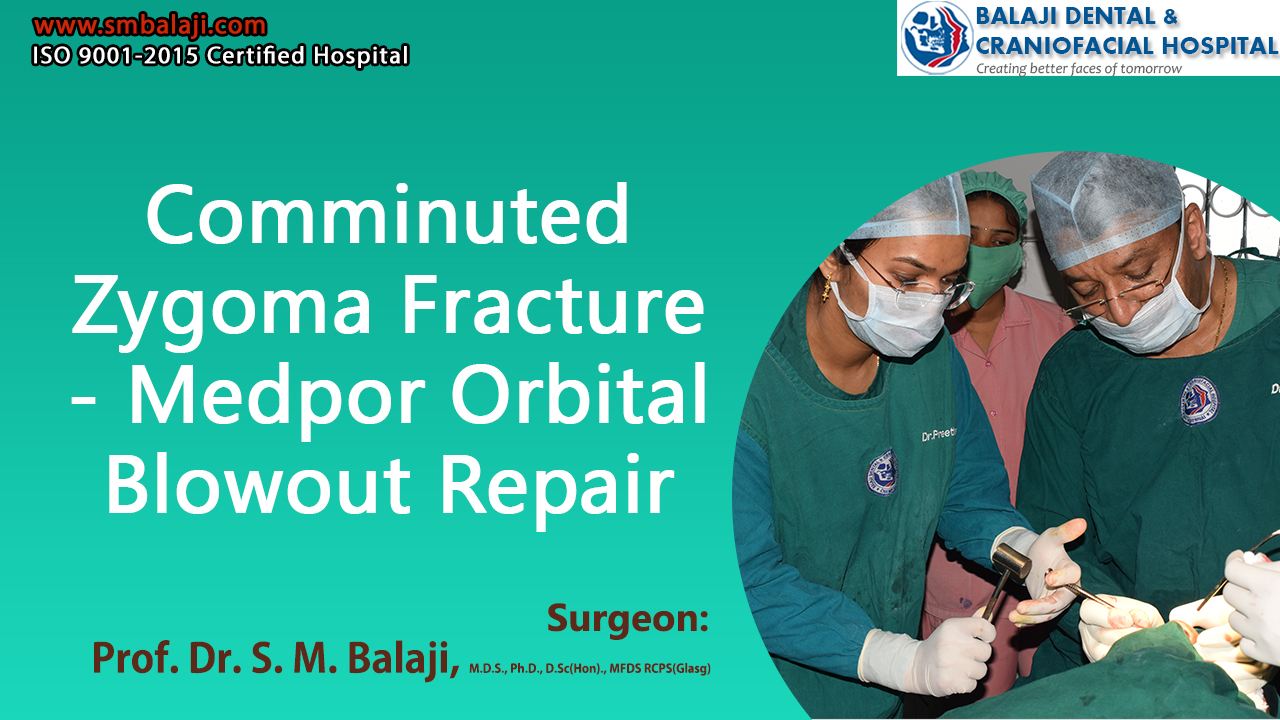 Patient involved in an accident while on a holiday

The patient is a 28-year-old male from Chennai, Tamil Nadu, India. He was recently holidaying with his family in Rajasthan when he was involved in a motor vehicle accident. A camel had suddenly strayed onto the path of his car, which had resulted in a collision. His face had violently impacted on the steering wheel causing fractures (broken bones) to his orbit and zygomatic bone.

Emergency treatment at a nearby city hospital

He did not lose consciousness following the injury; however, there was significant double vision. The patient was rushed by his family to a nearby hospital where his right upper eyelid soft tissue laceration was sutured.

Imaging studies were also obtained, which revealed fractures to the right side of the face. He was advised surgery, but declined as he wished to undergo surgery at our hospital.

Our hospital is renowned for facial trauma surgery arising from road accidents. The facial cosmetic surgery services available at our hospital provide very good esthetic outcome for the patient. We have a dedicated facial trauma care unit that caters to such cases.

Patient presents to our hospital for surgical management of fracture

Dr SM Balaji, facial trauma surgeon, examined the patient and obtained a detailed history. He then ordered a 3D CT scan and other pertinent imaging studies. The patient complained of a depression on the right side of the face and double vision in the right eye. Clinical examination revealed depressed right zygoma and double vision.

Radiographic examination revealed a shattered zygoma and orbital floor with a midpalatine suture split. There was evidence of subconjunctival hemorrhage in the right eye as a result of the trauma. The patient was experiencing severe discomfort and difficulty with viewing due to his double vision.

Treatment planning presented to the patient in detail

It was explained to the patient that he needed fixation of the midpalatine suture split. He also needed lateral orbital wall fracture fixation and right orbital floor reconstruction with a titanium Medpor implant. Zygoma fracture elevation and fixation would be performed through an intraoral approach to avoid external scar formation.

It was also explained that he needed to stay on a liquid diet for about one to two weeks following surgery. The patient and his parents were in complete agreement with this surgical plan and consented for surgery. Presurgical anesthetic evaluation was completely normal for the patient. This was performed per American Board certified presurgical protocols.

Under general anesthesia, a sulcular incision was made in the left anterior maxilla and mucoperiosteal flap raised. The dentoalveolar fracture and midpalatine suture split was reduced and fixed using titanium plates and screws. This was followed by a vestibular incision that was made in the right posterior maxilla. A flap was raised and the fractured segments of the zygoma were visualized.

A transconjunctival incision was then made and the inferior orbital wall fracture was visualized. Orbital contents were elevated. Herniated periorbita was released from the orbital floor.

Surgery was successful with no complications. Results were immediate with restoration of previous facial esthetics. The patient and his family were fully satisfied with the outcome of the surgery.

There was no depression and his face was now symmetrical on both sides. His double vision was also corrected following orbital floor reconstruction. 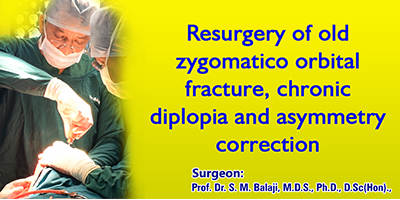 The patient is a young man who had suffered a zygomatico orbital fracture from a road accident. He had also suffered a depressed supraorbital bone fracture over his left orbit. This had happened in his hometown two years ago. He had undergone emergent surgery at a local hospital. This surgery had left him with an asymmetric face and chronic diplopia. The chronic diplopia was the result of an orbital floor fracture that had not been set right. This had been a source of trouble for him for the last two years. He decided to get it corrected and approached a general dentist. The general dentist referred him to Balaji Dental and Craniofacial Hospital, Teynampet, Chennai.

The patient presented at the hospital and Dr SM Balaji, oral surgeon, examined the patient. He ordered 3D axial CT scans and studied them. He explained the plan of treatment to the patient. The patient was in full agreement with the treatment plan.

Under general anesthesia, a rib graft was first harvested from the patient. A Valsalva test did not reveal any perforation into the thoracic cavity. The incision was then closed in layers.

The depression in the supraorbital region was next addressed. An incision was first made in the left maxillary vestibular region. Dissection revealed the bony depression in the supraorbital region. A piece of rib graft was then crafted to fit into the bony depression. This was then screwed into place. This resulted in reestablishment of perfect facial symmetry for the patient. The patient recovered from general anesthesia without any complications. 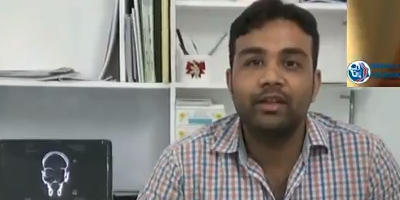 Testimonial – Mr. Taha from UAE is a case of Zygomatico-orbital Fracture

My name is Taha. I am working in the UAE. I have been following Dr. S.M. Balaji since three years. Actually before three years, I met with an accident. I had emergency surgery, but I was never satisfied with the result. I kept on searching every doctor, every possible things I could search for my betterment, but the satisfactory answer I got was in Dr. S.M. Balaji Hospital, Chennai. Sir told me yes brother, your condition will be improved. So I planned everything, I came, and I got operated with Dr. S.M. Balaji. Now my diplopia has been corrected and he did so well that I cannot even see a scar on my face. So really, really, I am so grateful and very thankful to Dr. S.M. Balaji. Thank you sir, thank you very much.