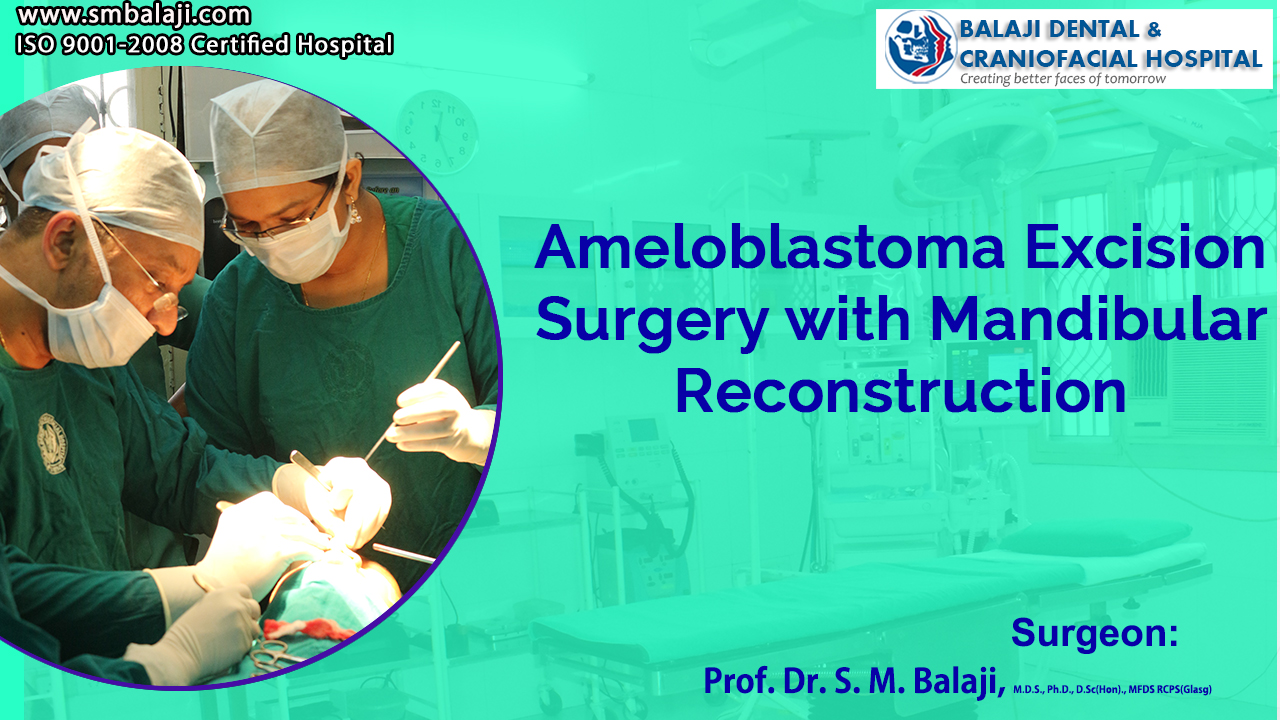 The patient is a 55-year-old female patient from Thane in Maharashtra, India. She began noticing a progressively enlarging swelling in the right mandibular region. There was also development of progressive mobility of teeth in the region.

This greatly alarmed the patient and her family. They had presented to a local surgical hospital for consultation. This was a multispecialty surgical hospital, which also offered oral surgery services.

Initial presentation at a local hospital for surgical correction

The oral surgeon at the hospital had examined the patient and ordered radiographic studies. Biopsies had been obtained, which returned with a diagnosis of ameloblastoma. The patient had been counseled regarding the diagnosis and treatment planning had been explained to her in detail.

She had subsequently undergone ameloblastoma resection and reconstructive surgery with rib grafts and mandibular reconstruction plates. A few months after surgery, she developed pus discharge from the surgical site and underwent reoperation.

There was also gum tissue inflammation at the site overlying the previous operation. The rib graft, which had become infected, was removed along with the reconstruction plate. There was no plate exposure in this case.

What is an ameloblastoma and what are its implications?

Ameloblastoma is a benign or cancerous tumor of the odontogenic epithelium. The tumor occurs more commonly in the lower jaw than the upper jaw. This tumor was first named ameloblastoma in 1930 by Ivey and Churchill.

Ameloblastoma are rarely malignant or metastatic. They however progress relentlessly and result in severe abnormalities of the face and jaw causing severe disfiguration. Treatment involves utilization of wide surgical excision in order to ensure that it does not recur. If left untreated, it ultimately results in obstruction of nasal and oral airways.

The patient had severe facial asymmetry after removal of the infected bone grafts and reconstruction plates. Speech and eating also became very difficult for the patient. In the meantime, there was also recurrence of swelling in the region of the right first mandibular molar. This was diagnosed as recurrence of the ameloblastoma.

Alarmed at this, the patient and her family made widespread enquiries about the best ameloblastoma surgery hospital for her treatment. They were subsequently referred to our hospital for surgical management of her condition

Initial presentation at our hospital for treatment of her ameloblastoma

Dr SM Balaji, mandibular reconstruction surgeon, examined the patient and ordered comprehensive radiological studies including a 3D CT scan. Radiological studies revealed recurrence of ameloblastoma at the region of the lower right first molar with lingual perforation of the cortex.

Treatment planning was explained to the patient and her family in detail. This would involve segmental resection of the right mandible. Resection would be followed by reconstruction with rib grafts and reconstruction plate and screws.

It was explained that dental implant surgery with placement of crowns would complete rehabilitation of the oral cavity. Removable dentures are rarely used in modern dentistry. The patient was in agreement with the treatment plan and consented to surgery.

Under general anesthesia, a right inframammary incision was made and a costochondral rib graft was harvested. A Valsalva maneuver was performed to ensure that there was no perforation into the thoracic cavity. The incision was then closed in layers with sutures.

The region of bony defect following the resection was reconstructed using rib grafts and mandibular reconstruction plates and screws.  Hemostasis was achieved and closure was done with sutures.

Successful reconstruction of mandible with further instructions to patient

There was good restoration of mandibular contour following surgery. The patient understood that she would need to return after bony consolidation of the implants in six months. Dental implants would then be placed followed by placement of ceramic crowns.

The patient and her family expressed their satisfaction with the results of the surgery. They stated that they would return in six months for dental implant surgery. The patient stated that she was very happy and relieved with successful completion of her surgery.