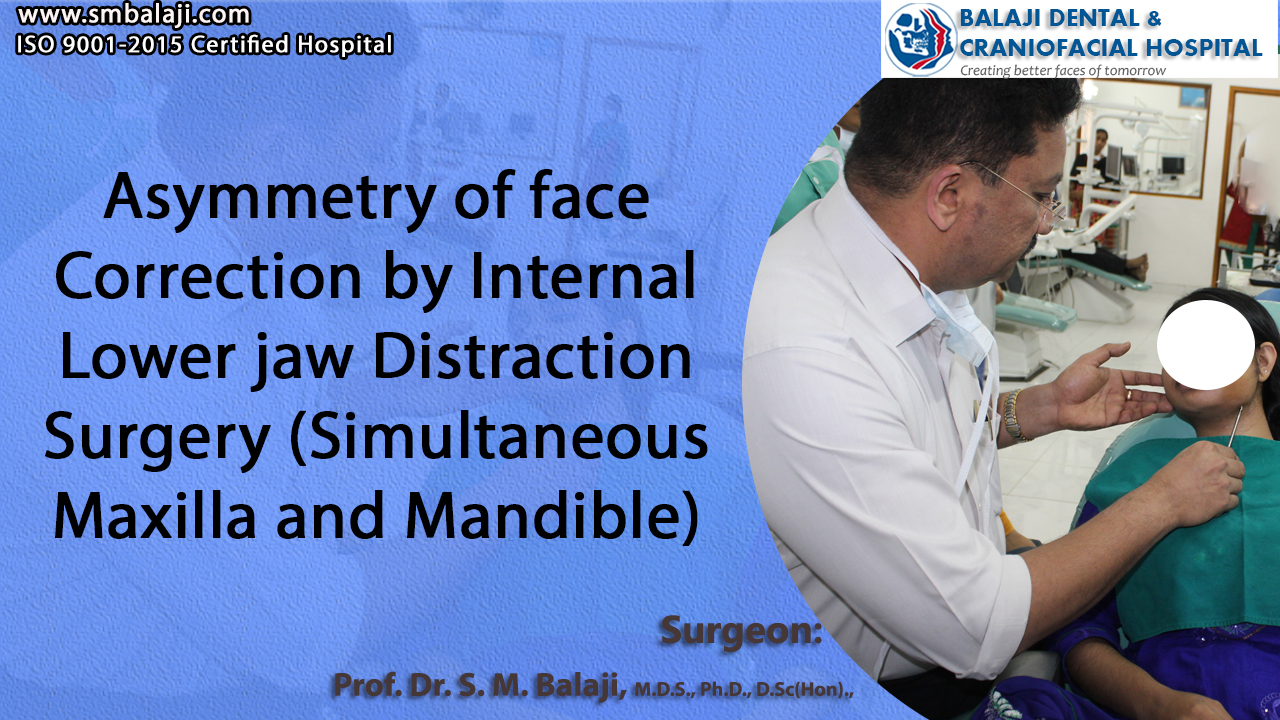 True symmetry cannot exist in nature. There is always a degree of asymmetry in everything. It can be so mild that it cannot be noticed or it can be severe enough to be easily noticeable. Every human face is slightly asymmetric. In most cases, it is barely perceptible and is not disfiguring. However, when it is cosmetically disfiguring or causes functional problems, it needs to be corrected through surgical procedures. A wide range of surgery procedures and cosmetic procedures have been developed over time to correct this disfigurement.

One of the signs of aging is the increase in facial asymmetry. This can be the result of loss of tone in the soft tissues. The degree of facial asymmetry caused by old age is negligible and needs no treatment.

Board certified plastic surgeons are the specialists who deal with these problems in the United States. Oral and maxillofacial surgeons also offer this treatment in India. There are components of functional as well as cosmetic correction in these surgeries. Trauma to the temporomandibular joint is one of the most common causes of lower face asymmetry in the world. Direct impact to the chin can result in trauma to the jaw joint, which can ultimately result in ankylosis of the joint.

Release of ankylosis of the jaw is usually accomplished through interpositioning of the temporalis muscle in the joint. Mobilization of the TMJ is done early. Muscle relaxants are given if there is spasm of the jaw muscles and physical therapy exercises that aid in increasing mouth opening are performed to aid in quick recovery of the patient.

Development of TMJ ankylosis from a childhood trauma

The patient is a 23-year-old girl from Erode, India who fell down and sustained a direct injury to her chin as an infant. Her mouth opening gradually began to decrease until it finally became very limited. This led to difficulty with feeding and speech. There was also deviation of the lower jaw to the left side as she grew older. Around eight years ago, it reached a point where it made functioning difficult for her and her parents visited a dentist for consultation. He diagnosed her to have ankylosis of the left temporomandibular joint and referred her to our hospital for TMJ ankylosis surgery. Our hospital is renowned for TMJ surgery in India.

The first surgery at our hospital

Dr SM Balaji examined the patient and obtained imaging studies, which confirmed the diagnosis of left TMJ ankylosis. He then explained to her parents that she needed surgical correction of her ankylosed left TMJ. He proposed performing a gap arthroplasty with temporalis muscle interpositioning to release her ankylosed joint. Her mouth opening improved greatly after surgery, but her facial asymmetry persisted.

Her facial asymmetry began to gradually worsen as she grew older. She also developed a retruded mandible. This began to affect her day to day life and she lost self confidence. She isolated herself inside her house and refused to socialize. This worried her parents a great deal and they brought her again to our hospital for comprehensive treatment.

Referral to our hospital for surgical management of her facial asymmetry

Upon examining her, Dr SM Balaji, facial cosmetic surgery specialist, examined the patient and ordered a 3D CT scan of the patient’s mandible. This revealed that the mandible had shifted to the left side because of the TMJ ankylosis. Clinical examination revealed an obvious facial asymmetry with the presence of an occlusal cant. The right side of the mandible was also longer than the left side.

Even though the defect was observed on the right side clinically, the patient would need to undergo treatment on the left side to correct the facial asymmetry through the use of mandibular distractors. A mandibular ramus distractor would be fitted on the left side to increase the length of the mandible. A Le Fort I would also be performed on the maxilla for correction of the patient’s occlusal cant. This was explained to the patient and her parents in detail who agreed to the procedure and signed the surgical consent.

A sulcular incision was then made in the maxilla following which a Le Fort I osteotomy was performed for mobilization of the maxilla. The left posterior maxilla was then fixed using transosseous wires.

Intermaxillary fixation was then performed. Following a latency period of about a week, a distraction of 1 mm was performed everyday for a total of 19.5 mm. Distraction was terminated after achieving satisfactory lengthening of the left side of the mandible. A titanium plate was then used to stabilize the maxilla after correction of the patient’s occlusal cant.  The distractor will be removed after consolidation of bone at the site of distraction.

The patient and her parents were extremely happy and expressed their complete satisfaction before discharge from the hospital. They will present again after three to four months for removal of the distraction device from the mandible.