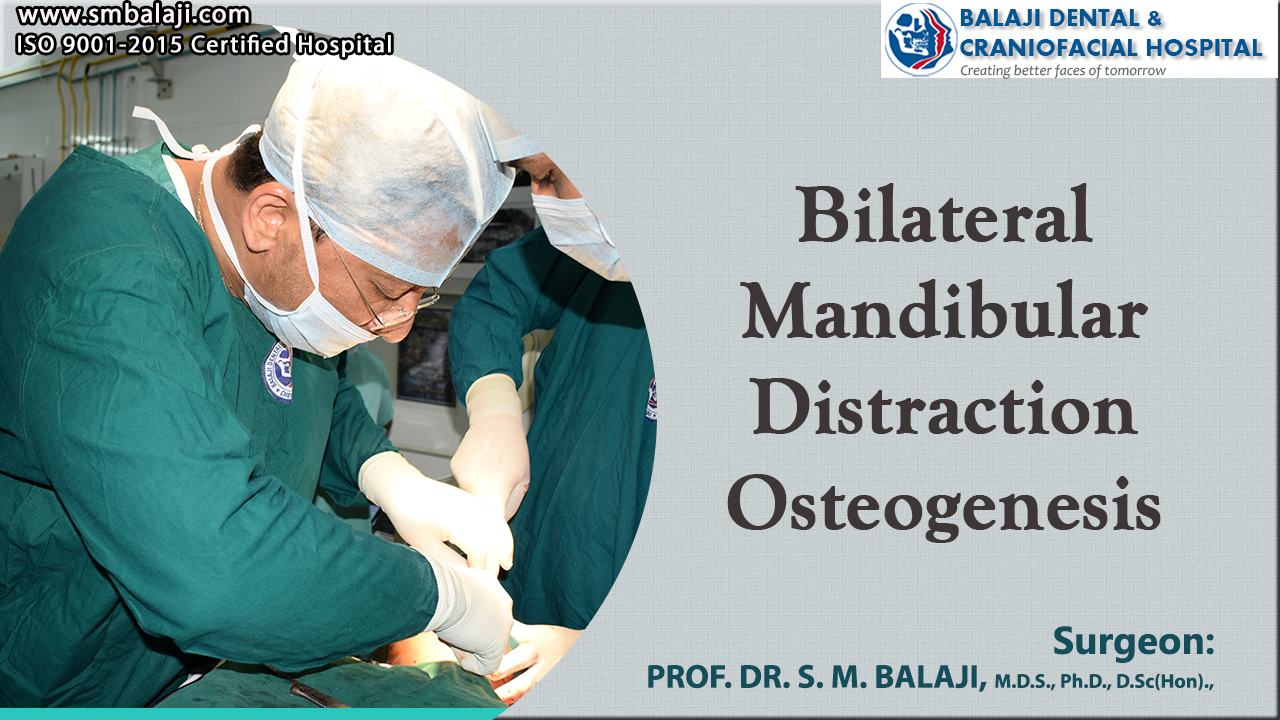 A fall from bed as an infant with resultant chin injury

The patient is a 4-year-old boy from Chennai in Tamil Nadu, India who rolled off his crib as an infant. He had landed on his chin and had cried a lot due to the resultant pain. His worried parents had taken him to a nearby hospital where the duty doctor had examined him and prescribed analgesics.

The child soon returned to his normal playful self though he had developed difficulty chewing. Parents soon noted that his facial structure was slowly changing with his chin getting retruded progressively. He also developed progressive breathing difficulties.

The parents then had taken him to an oral surgeon who diagnosed bilateral ankylosis of the TMJ. He advised release of the ankylosis, which had been done. However, the patient still had difficulty with mouth opening and his breathing difficulties were also worsening. It was then that he was referred to our hospital for management of his difficulties.

Dr SM Balaji, Jaw Lengthening Surgery specialist, examined the patient and obtained a detailed history from the parents. They complained that he was always feeling drowsy and tired. He was listless and had difficulty breathing, particularly during sleep.

Dr SM Balaji noted that the patient looked very pale and had mild cyanosis of the skin. The patient also had a backwardly positioned lower jaw. He immediately ordered for pulse oximetry and oxygen saturation tests, which revealed extremely reduced blood oxygen levels in the red blood cells.

It was decided to do an emergency tracheostomy to relieve this and the patient’s skin tone immediately returned to normal.  The parents were counseled that the tracheostomy needed to be in place during the entire period of jaw lengthening through mandibular distraction osteogenesis.

It was explained to them that the tracheostomy needed to be retained for about 4-5 months during the entire duration of distraction treatment. Mandibular lengthening through distraction device fixation would lead to increased airway space, thus facilitating improvement in his breathing. Parents were in agreement with the treatment plan and consented to surgery.

After a period of about five days, distraction was started by turning the distractors clockwise. The Univector distractors were distracted bilaterally by 1 mm daily for a total of 20 mm in three weeks to compensate for deficiency in growth of the mandible.

Distractors retained during the period of bony consolidation

Lower lip function including sensation was intact with complete reformation of the nerve canal. This was documented radiographically. The patient’s facial profile was also normal with lengthening of the mandible.

His breathing had returned to normal following the increase in his parapharyngeal space. He was once again a very active young boy. The parents expressed their gratitude to Dr. Balaji as their child was breathing well during sleep without any signs of obstructive sleep apnea.