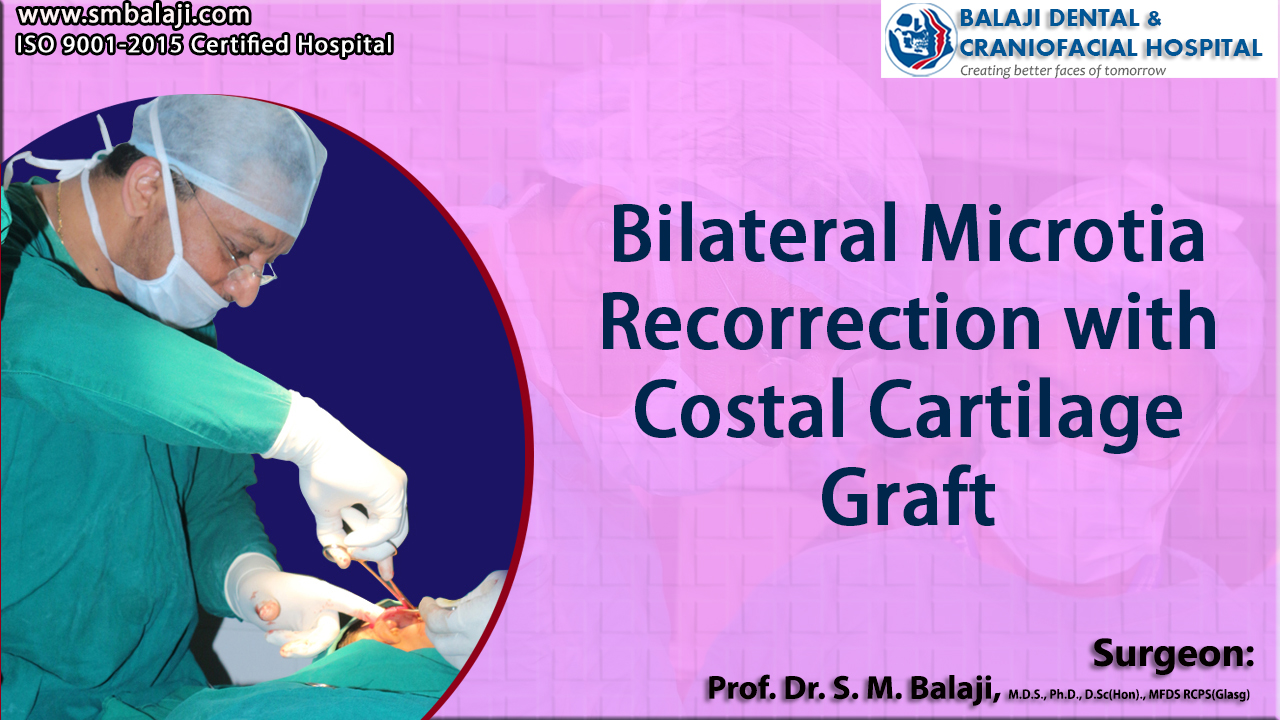 The patient is a 13-year-old boy from Chittoor in Andhra Pradesh, India. He had been born without external ears. There were only rudimentary structures present at the site of bilateral ears.

He had been diagnosed with hemifacial microsomia with bilateral microtia. There was also gross asymmetry of his face.

The patient had faced constant bullying over the years in school. He had very few friends and had slowly grown depressed about the appearance of his face. Approximately a year ago, he had refused to go to school until his ear deformity had been corrected. He stated that he wanted big prominent ears.

His parents had approached a cosmetic surgeon in a nearby city who had examined the patient. He had weighed all treatment options. Realizing that the patient needed microtia correction surgery, he had presented the treatment plan to the parents.

They had consented to the surgery. He had been admitted to the hospital and had subsequently undergone surgery. However, the patient and his parents were not satisfied with the results of the surgery.

There had been slight asymmetry of the cartilaginous form of the external ears. There were also hypertrophic scars, which were unsightly. They felt that the scar tissue needed to be addressed. It however did not involve a large area of skin.

Realizing that this needed to be corrected, parents had made wide enquiries regarding the best hospital to get the problem addressed. They had subsequently been referred to our hospital for his correction surgery. Our hospital is a renowned center for facial cosmetic surgery in India.

Dr SM Balaji, microtia correction surgeon, examined the patient and obtained a detailed history. The patient’s parents explained their anxieties and fears regarding the failed surgery. A complete clinical examination was performed and comprehensive radiographic studies including a 3D CT were ordered.

It was determined that there was deficiency of cartilage that had been placed in the first surgery. The patient and his parents were reassured and counseled extensively.

His 3D CT scan revealed the presence of an anatomically patent, middle ear, inner ear and ear canal. Clinical examination also revealed facial asymmetry on the left side. Auditory testing was also performed for the patient. This revealed that he had about 70-80% hearing in both the ears despite the absence of external ear structures

A brief introduction to microtia and its etiological factors

Microtia is a congenital deformity where the pinna is underdeveloped. Complete absence of the external ear is referred to as anotia. Because microtia and anotia have the same origin, the complex can be referred to as microtia-anotia.

Microtia can be either unilateral or bilateral. It occurs approximately in 1 out of every 8000–10000 live births. The right ear is more commonly affected in cases of unilateral microtia.

Microtia may occur as a complication of taking Accutane (isotretinoin) during pregnancy. The etiology of microtia in children however remains uncertain. It is suspected to be genetic in origin along with being a complication of gestational diabetes. Risk factors also include very low birth weight.

Treatment planning explained to the patient and his parents in detail

It was planned to correct the asymmetrical form of bilateral ears from the previous surgery. This would be followed by a subsequent stage at a later date where the ear structures would be elevated followed by creation of the ear lobule in the final stage of the surgery. They were in agreement with the treatment plan and the patient was scheduled for surgery.

Under general anesthesia, a left inframammary incision was made and dissection was performed down to the ribs. Costochondral grafts were harvested and Valsalva maneuver was performed to ensure that there was no perforation into the thoracic cavity. The wound was then closed in layers with sutures.

This was followed by incisions performed over the asymmetrically constructed ear structures. The costochondral grafts were shaped and tunneled to ensure that the resultant ear form was symmetrical and esthetically pleasing. Incisions were then sutured using nonresorbable sutures.

Parents express their satisfaction with the cartilaginous ear framework

The patient and his parents were very happy with the esthetic outcome of the corrective surgery. There was a well defined and symmetrical cartilaginous framework to the ears bilaterally. They could clearly visualize the ear taking shape.

Parents expressed that the patient had definitely cheered up following the surgery. They stated that he was looking forward to the subsequent stage of the surgery. The ear elevation surgery using skin graft will be performed after about 6 months.