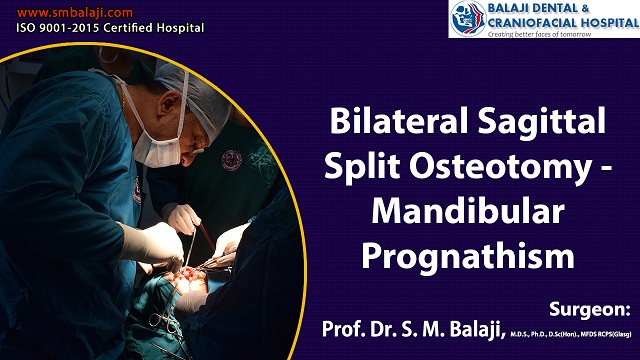 Patient with excessive mandibular protrusion since an early age

The patient is a 22-year-old woman from Manimala in Kerala, India. She states that she always remembers having a large lower jaw. Her chin bone too was extremely prominent. This had always detracted from her overall facial appearance. She remembers being bullied at school because of this.

Eating too had always been difficult because of this. She states that certain consonants were also distorted due to the protrusion of her mandible. Teachers had always complained that she needed to speak clearly in order to be understood. All these factors had resulted in the patient being quiet and withdrawn during her growing years.

Around six months ago, a visiting neighbor who was an Ernakulam-based dentist had advised her to get this surgically corrected. He had spoken about the benefits of undergoing surgical correction of her mandibular prognathism. Explaining further, he had said that it would greatly improve both her esthetics and functioning.

The visiting dentist explained that the surgical technique used for mandibular prognathism reduction surgery required an experienced surgeon. This would ensure that there was no damage to the inferior alveolar nerves bilaterally. The patient had then been referred to our hospital for lower jaw reduction surgery.

This surgery cannot be performed in pediatric patients with mixed dentitions. Growth has to be completed before undertaking this surgical correction. This rarely results in temporomandibular disorders.

Initial presentation for mandibular reduction surgery at our hospital

Dr SM Balaji, jaw surgery specialist, examined the patient and obtained imaging studies including a 3D CT scan. The patient had a skeletal anterior cross bite. There was a mandibular overjet of around 8 mm.

Molars were in a class III relationship. This was causing a great deal of inconvenience to the patient’s activities of daily living.

Meticulous treatment planning was performed for the patient. It was then decided to perform Obwegeser’s bilateral sagittal split osteotomy with a setback of 8 mm of the mandible. This would result in perfect occlusion of the teeth along with establishment of a pleasing facial profile.

Treatment planning was explained in detail to the patient and her parents. The following doubts were cleared for them. Mandibular nerves would be carefully protected from injury during surgery. The temporomandibular joint was not a factor in this surgery. They were in complete agreement with the proposed treatment plan and consented to surgery.

Successful completion of the mandibular setback surgery for prognathism correction

Under general anesthesia, incisions were made and flaps were raised down to the body of the mandible. Obwegeser’s bilateral sagittal split osteotomy was then performed. An osteotome and oscillating saw were used to perform this portion of the procedure.

Care was taken to ensure that the inferior alveolar nerve was in the distal segment. This would ensure that there was no damage to the nerve during the entire surgical procedure. The mandible was then set back with removal of 8 mm of excess bone.

Occlusion was checked and temporary intermaxillary fixation was done. The mandibular segments were then stabilized with titanium plates and screws.

The intermaxillary fixation was released and incisions were closed with sutures. The mandible was now in a class I molar relationship with the maxilla.

The patient and her parents were very happy with the results of the surgery. There was an immediate improvement in the patient’s esthetics and function. Her speech was also normal now and easily understood. Facial features were also very esthetic in appearance. They expressed their thankfulness to the surgical team before final discharge from the hospital.