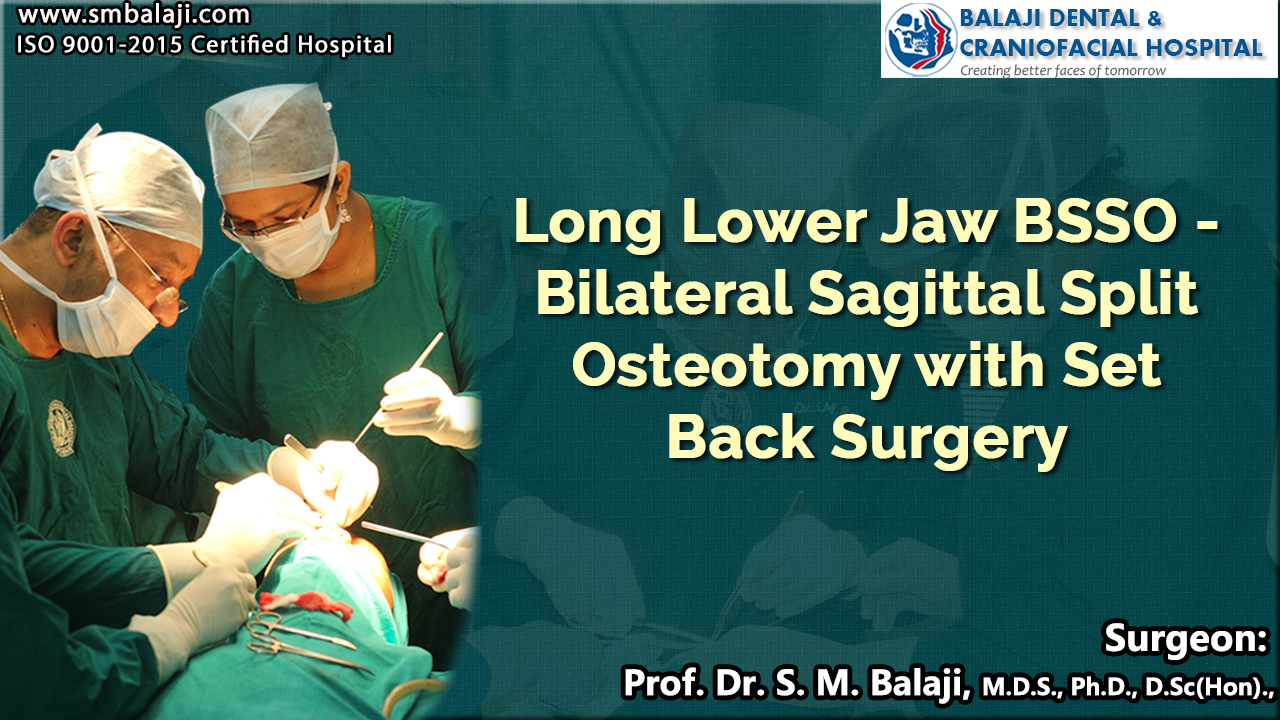 Etiology behind the occurrence of mandibular prognathism

Mandibular prognathism is the excessive protrusion of the mandible in relation to the rest of the skull. It is considered to be a pathological condition when it compromises both the functional and esthetic aspects of the lower jaw. An extended chin and an anterior crossbite renders both eating and speech difficult for the patient.

The functional problems caused by mandibular prognathism can lead to severe limitations in jaw function. Corrective jaw surgery is performed to set right the functional problems. This is also a cosmetic surgery as it leads to an improvement in facial esthetics for the patient. The open bite and the cross bite are also corrected by this surgery.

Bilateral sagittal split osteotomy, which is the surgery performed for correction of mandibular prognathism is performed by oral and maxillofacial surgeons. Other surgical procedures performed by them include TMJ surgery.

The patient is a 25-year-old female from Indore in Madhya Pradesh, India who had always had a long lower jaw in relation to her upper jaw. She also had a degree of facial asymmetry arising from this condition. There were also issues with difficulty with speech and eating. She was also unable to close her lips fully. This was resulting in dry chapped lips. Her parents had decided to seek medical attention to correct this problem. They had approached a local orthopedic surgeon who had examined the patient. He explained to the patient and her parents that she needed to be operated on by an Oral and Maxillofacial Surgeon. He had referred them to our hospital as we are one of the premier centers for jaw reduction surgery in India.

Incidence rates of facial asymmetry in the general population

Among the overall population, facial asymmetry can either be noted clinically or subclinically. It not only causes esthetic compromise, but also affects functionality. Facial asymmetry can due to many etiological factors. These can broadly be divided into congenital or acquired. The treatment plan for facial asymmetry depends on age, severity and etiology. Treatment planning is arrived at by carefully assessing the results of the intraoral, extraoral and radiological examinations.

Dr SM Balaji, jaw reconstruction surgeon, examined the patient thoroughly and ordered radiological studies. The patient had an anterior crossbite with class III malocclusion. Various model studies were performed following which Dr SM Balaji advised them that she best undergo lower jaw reduction followed by fixed orthodontic therapy for management of her malocclusion. The patient and her parents were in agreement with the treatment plan and signed the consent form.

Under general anesthesia, incisions were placed in the mandibular retromolar regions bilaterally following which flaps were elevated. This was followed by bone cuts being made and bilateral sagittal split osteotomy performed. Extreme care was taken at this stage to ensure that there was no iatrogenic damage to the inferior alveolar nerve. It was mobilized with the distal segment so that the proximal segment could be adequately mobilized for the bilateral sagittal split osteotomy. The mandible was then pushed backward, checked for occlusion and fixed using Titanium plates and screws. This was followed by closure using resorbable sutures.

The patient was very happy with the outcome of the surgery. Her occlusion was completely normal and her maxillary teeth and mandibular teeth were in good alignment with a normal occlusion. Her facial profile was also corrected. She will still need to undergo fixed orthodontic treatment to correct the individual malalignment in each tooth. The patient was advised to return for this in a few months.