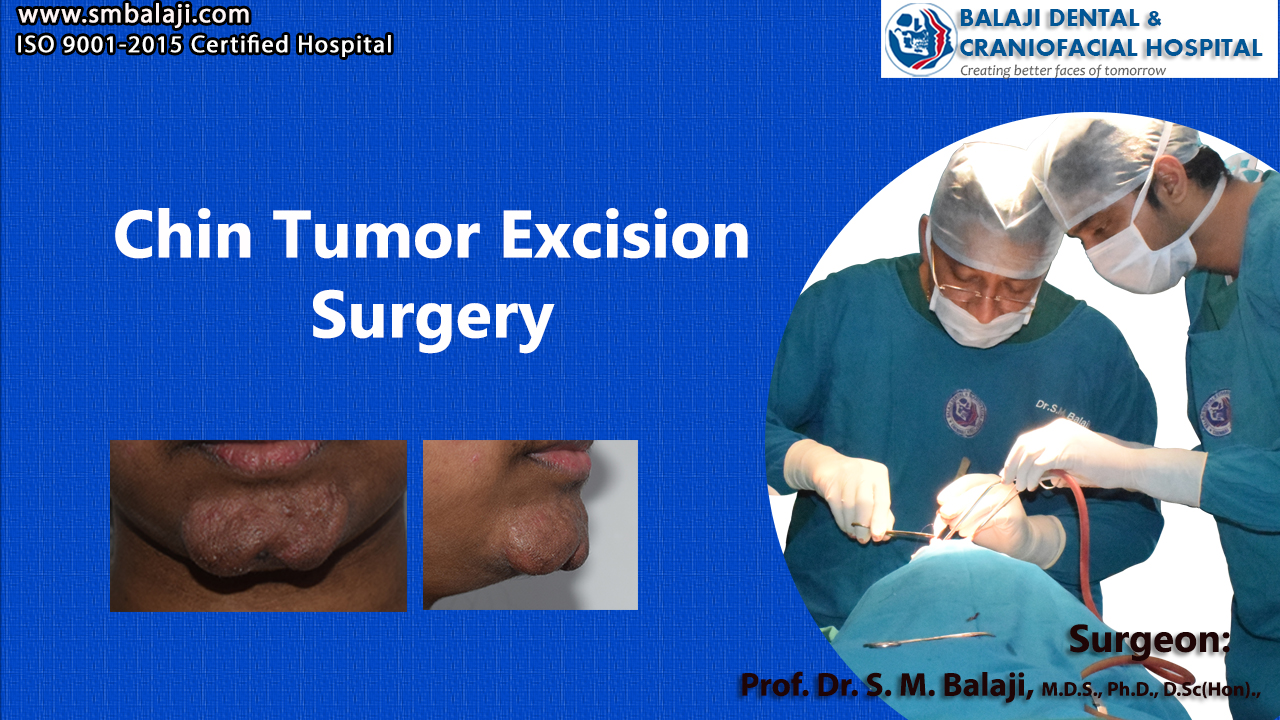 Patient develops an ugly growth on her chin

This 24-year-old female from Arani, Tamil Nadu, India developed a pimple near the mole on her chin around two years ago. It initially appeared like a normal pimple; however, it did not stop growing, but continuously increased in size until it became a huge growth on her chin. This alarmed her because of its proximity to the mole on her chin. She visited many hospitals in her hometown, but no definitive diagnosis was made of this growth. This unsightly growth distressed her and she became reclusive because of this. She finally visited a cosmetic surgeon who diagnosed her growth as acne rosacea and referred her to our hospital for surgical excision of the growth. Our hospital is reputed for facial cosmetic surgery in India.

What is acne rosacea?

Acne rosacea is a persistent redness that appears in the middle face, which is usually related to abnormalities in the facial blood vessels. It is a benign inflammatory disorder, which affects around 45 million people worldwide. Not many with this condition are diagnosed as they just assume that they have very sensitive skin and learn to live with this often discomforting condition. It varies in its intensity in the same patient and waxes and wanes in severity.

Acute exacerbation of this condition involves the appearance of inflammation and pimples. One of the signs and symptoms of this skin condition is the flushed appearance of the face. The blood vessels of the nose and the cheek are often visible and appear along with swollen red bumps.

This can potentially be extremely bothersome and embarrassing to the patient and will worsen with time if left untreated. However, with prompt diagnosis and treatment, symptoms of this condition can be brought under control, allowing the patients to lead normal lives.

Management of acne rosacea through the application of medications

Those with this condition are also prone to pimples. Azelaic acid is sometimes prescribed to control the symptoms that arise from this condition. Side effects that can possibly arise from application of this medication include a stinging or a burning sensation, peeling of the skin and severe dryness. This belongs to a group of skin disorders that cause cosmetic compromise of the facial skin. Treating rosacea medically with the use of skin care products is the first line of treatment.

Common signs and symptoms of the condition

The American Association of Dermatology also advocates this treatment protocol for the treatment of acne rosacea. Pustulopapular rosacea involves eruption of pimples in the affected region that could get infected. Patients with rosacea usually learn to avoid triggers that exacerbate this condition like spicy food, alcohol, smoking, etc. Use of broad spectrum sunscreens does help keep the symptoms of this condition under control though there is no cure for this condition and it requires long term care.

Surgical management of this condition falls under the purview of plastic surgery in India and is also performed by plastic surgeons. When the growth becomes excessive, it can be extremely disfiguring for the patient and intervention through surgical cosmetic procedures will lead to overall increase in the quality of the patient’s life.

This condition predominantly affects the facial skin though it can also occur on the neck, chest, scalp or ears. People with rosacea usually have a history of easily blushing or flushing. A burning and stinging sensation can also accompany this condition.

Dr SM Balaji, a renowned facial cosmetic surgeon in India, examined the patient and obtained a detailed history of the condition from the patient. He felt that the size of the lesion was too big to operate and decided to refer the patient to a dermatologist in order to bring down the size of the lesion to a manageable size before surgically excising it. This patient’s condition was extreme necessitating surgical removal. Medical management is more than adequate usually for acne rosacea treatment. The patient was then referred to a dermatologist who prescribed medications for the same. This brought down the size of the lesion within manageable limits following which the patient again presented back at our hospital for follow up. The lesion had significantly reduced in size after two months and it was decided to proceed with surgery.

Successful removal of the chin lesion through surgery

Under general anesthesia, the chin area was prepped thoroughly and a W incision was placed in the region of the lesion. Dissection was carried down to the subcutaneous tissues and the lesion was completely cleared from the region of the chin. The mole on her chin was also completely excised during this procedure. This was followed by closing the incision with fine sutures to minimize scar formation.

Patient expresses happiness at the outcome of the surgery

The patient was very happy with the outcome of the surgery. Her chin had been returned to its original dimensions and there was very minimal visible scar formation. She expressed her complete satisfaction with the results of the surgery and said that she could resume her old routines again as the removal of the lesion had helped restore the esthetics of her face thus boosting up her self-confidence.