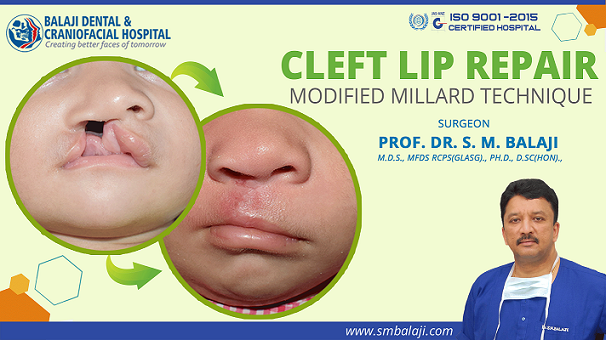 Mother had undergone routine prenatal care including an ultrasound of the fetus. This revealed the cleft deformity in the growing fetus. The parents were however unfazed by this development. Her uncle had undergone surgical correction of his facial deformities at our hospital nearly two decades ago.

He had hardly noticeable scarring from the surgeries and had never faced any difficulties secondary to his deformities. Always an excellent student, he is now pursuing his undergraduate studies in medicine. His ambition is to become a facial plastic surgeon dealing with congenital deformities of the face.

Parents had got in touch with our hospital soon after the ultrasound diagnosis for their child. Dr SM Balaji studied the ultrasound images in detail. He then advised them to come to the hospital when the child was 3 months old.

Our hospital is a preeminent center for cleft deformity surgery in India. Dr SM Balaji is on the board of the International Cleft Lip and Palate Foundation (ICPF) of Japan. Prof. Kenneth Salyer, Founder of the World Craniofacial Foundation (WCF) has made our hospital a referral center for Southeast Asia.

Parents presented at our hospital when the child had attained 3 months of age. Her uncle too accompanied them. He was very familiar with all the members of the surgical team and greeted them. Everybody expressed their happiness at the great strides he was making towards attaining his ambition.

Dr SM Balaji, cleft lip and palate surgeon, examined the child. She had a buckled columella from the cleft deformity. There was also a split upper lip from the right-sided cleft lip defect. She also had a widened alar base defect to the nose.

Dr SM Balaji counseled the parents extensively. He said that the cleft lip surgery would be followed by cleft palate surgery at 8-10 months of age. Explaining further, he said that rh-BMP might be required for the cleft alveolus if the defect was large.

Under general anesthesia, surgery was first begun with an incision along the philtrum with dissection down to the subcutaneous tissues. The nasal floor defect was addressed first. The nasal floor was reconstructed using the flap.

The nasal sill was then reconstructed using a C-flap. A three layer lip closure was utilized as it offered the best cosmetic and functional results for the patient. The skin, subcutaneous connective tissue and muscles were reapproximated and joined with great precision. This resulted in optimal reconstruction of the lip vermillion border, philtrum and orbicularis oris muscle.

Nasal floor was reconstructed by raising the alar base. This gave good symmetry to the nasal correction. Fine 4-0 Vicryl sutures were used to close the incision in layers for minimal scar formation. The entire surgical procedure was performed under magnification through utilization of a surgical loupe.

The patient was gurgling and cooing by the seventh postoperative day. Scarring was minimal and would reduce further with the passage of time. The proud parents and uncle were extremely happy with the results of the operation. Patient had a good suckling reflex and had gained nearly 1 kg within the few days following surgery.

It was further reiterated to them that the road to complete rehabilitation was a long one for the patient. They expressed their complete confidence in the surgical team, which was essentially unchanged from the one that had treated the uncle. Expressing their thankfulness to everyone, they said that they will return in a few months for the cleft palate repair.