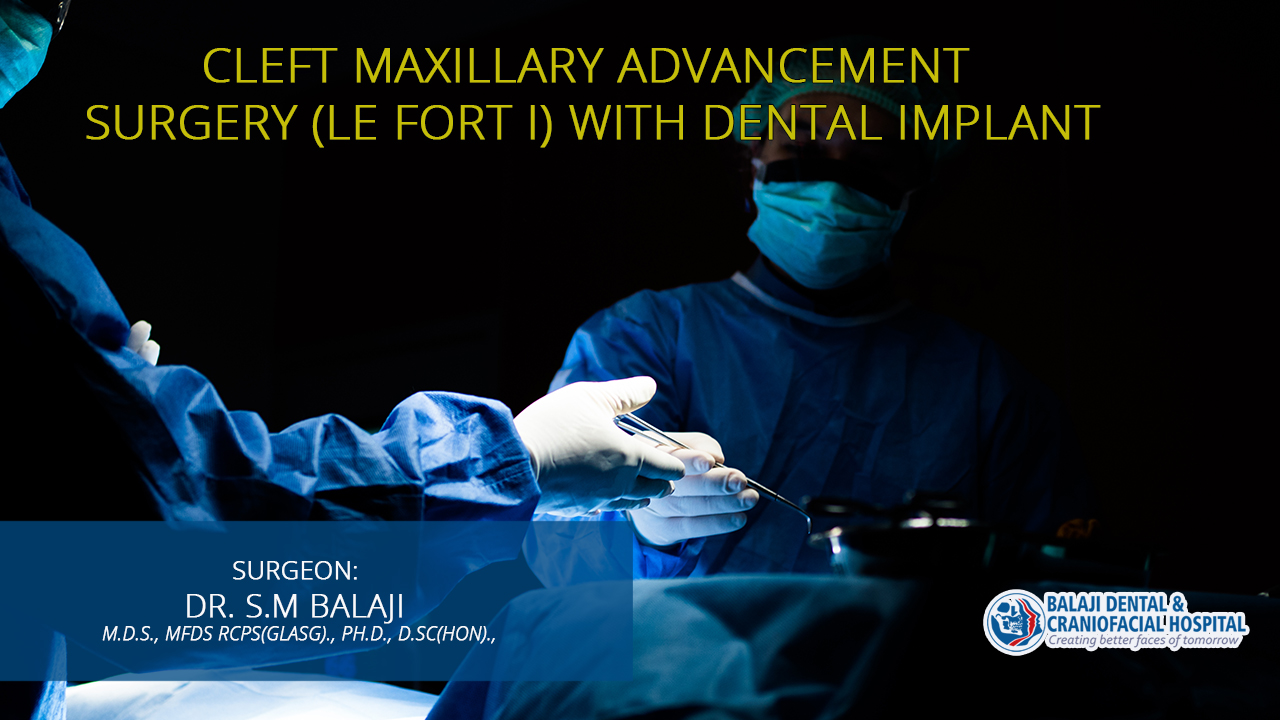 Patient born with a cleft lip and palate

The patient is a 15-year-old boy from Warangal in Telangana, India. He had been born with a unilateral left sided cleft lip and palate at a local hospital. Cleft lip is incomplete fusion of the two halves of the upper lip. A palatal cleft is incomplete fusion of the roof of the mouth. These deformities are the most common congenital deformities. A doctor at the hospital had referred the patient to our hospital. Our hospital is renowned for facial deformity surgery in India.

Dr SM Balaji examined the patient and treatment was commenced for the patient. The patient had undergone cleft lip surgery at 3 months of age and cleft palate surgery at 9 months of age. Cleft alveolar reconstruction surgery had been done at 4 years of age with BMP. An anterior crossbite developed as the patient grew up and there was backward positioning of the maxilla. There was also a congenitally missing left upper lateral incisor due to the cleft defect. He had a great deal of difficulty eating because of these defects. His parents brought him back to our hospital for correction of these deformities.

The patient became very self conscious of his facial deformity as he grew up and became socially withdrawn. There was a lot of bullying at school and he had very few friends. Bullying by peers is commonly faced by children with cleft lip and palate deformity. This is because they are perceived as being different by other children.

Parents of children born with cleft lip and palate are extensively counseled at the time of birth of the children. The first reaction at the birth of a baby with cleft deformities is shock followed by denial. They have to be counseled that full surgical rehabilitation will result in normal development of these children.

Dr SM Balaji, facial deformity correction surgeon, examined the patient and ordered comprehensive imaging studies. The patient had an increased crossbite in the anterior region. The maxilla was also in a retruded position in relation to the rest of the facial skeleton. There was also a congenitally missing lateral incisor on the left side due to unilateral cleft lip and palate.

Presurgical orthodontics was planned to bring the individual teeth in correct alignment before the surgery. Surgical correction would be followed by postsurgical orthodontics for final alignment of the teeth. A Le Fort I surgery was planned to bring out the retrognathic maxilla into correct position. It was also planned to give the patient a dental implant for replacement of the missing maxillary left lateral incisor.

The treatment planning was explained in detail to the patient’s parents who agreed to the plan. Presurgical orthodontics was initiated and the patient’s individual teeth were brought into correct alignment. The patient was next scheduled for surgical correction.

Surgical correction of the patient’s problems

Successful outcome of the surgical procedure

The patient and his parents were extremely happy with the results of the surgery. The maxilla was now in correct alignment with the rest of the facial skeleton. Facial esthetics were also very pleasing now. Postsurgical orthodontic alignment would be performed once there was complete consolidation of the bone at the site of surgery.

A ceramic prosthesis will be given at the implant after a period of three months once osseointegration of the implant is complete.