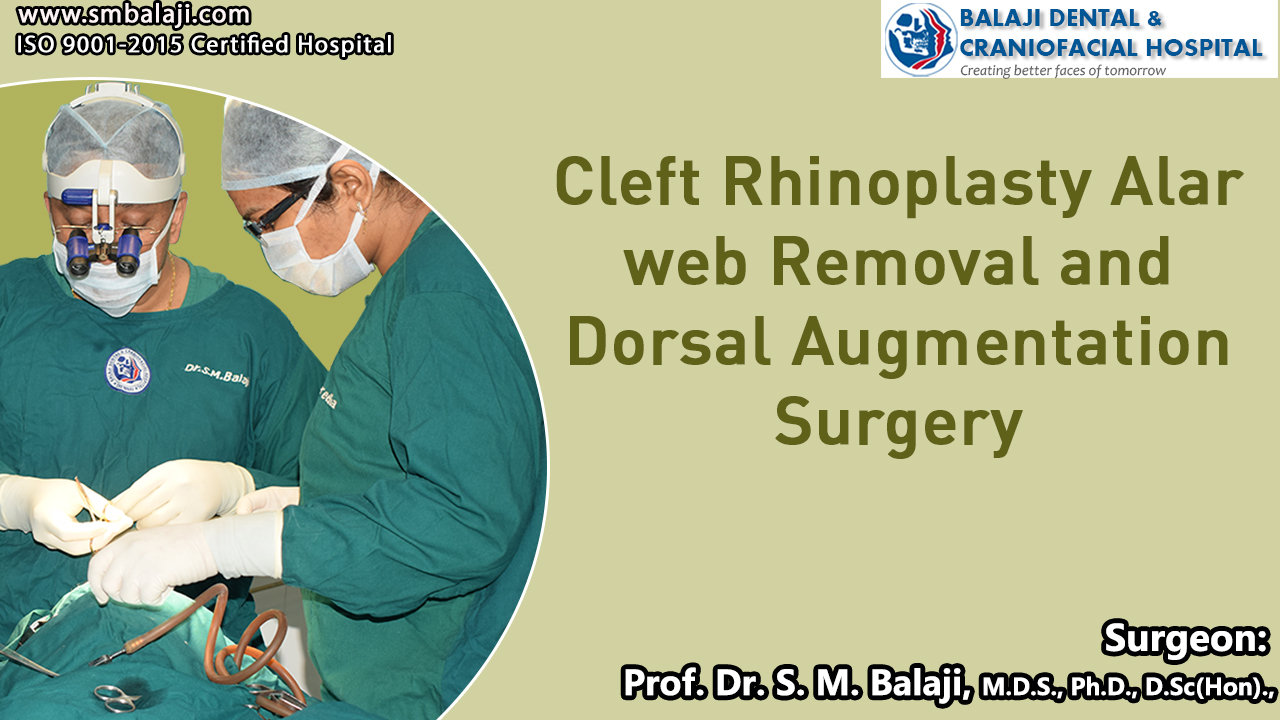 The patient is a 19-year-old female from Firozpur in Punjab, India, born with a left-sided unilateral cleft lip and palate. A cleft palate is an incompletely fused roof of the mouth. She had undergone cleft lip repair at 4 months of age and cleft palate repair at 9 months of age. This had been followed by cleft alveolus reconstruction at 4 years of age. All these surgeries had been performed at a local hospital by an oral and maxillofacial surgeon.

Surgical correction of these deformities is through oral and maxillofacial surgery. Experienced plastic surgeons also perform this surgery. Perfect alignment of many layers of skin and tissue are involved in this surgery. Surgery for removal of hypertrophic scar tissue might be needed at a later date. Bone grafts will be needed in case of bone deficiency in the alveolar region of the cleft. Speech therapy will be needed for normal development of speech. Normal speech development is very important for proper integration into society.

The patient had developed a retruded maxilla as she grew up as well as a nasal deformity. This had made her feel very self conscious and she had always kept to herself with very few friends. She had also faced a lot of bullying at school. Bullying by peers can cause a lot of psychological scars in children with congenital deformity. This is more so in the case of cleft lip and palate as it is on the face. Her worried parents had consulted again with the oral and maxillofacial surgeon who referred them to our hospital.

Initial presentation at our hospital in 2018

The patient and her parents initially presented to our hospital in 2018. Dr SM Balaji, rhinoplasty surgeon, had examined the patient and obtained a detailed history. He then ordered for detailed imaging studies, which revealed the retruded maxilla. The patient also had a nose that was depressed on the left side. There was also an ungainly scar with alar webbing on her upper lip from the previous surgery.

The patient and her parents wanted correction of the above defects along with creation of a symmetrical nose and scar removal. Treatment planning included Le Fort I correction of her retruded maxilla followed by scar revision surgery of her upper lip. A rhinoplasty surgery was also planned for the nasal deformity correction.

She underwent Le Fort I advancement of the maxilla at the time of her initial presentation to our hospital in 2018. She now presents with her parents for rhinoplasty and scar revision surgery.

Examination revealed that the patient had an unsightly scar from her previous cleft lip surgery. There was also a nasal deformity with a depressed left nostril, which was considerably smaller in size than the right nostril. Left nasal sill correction and nose correction with costochondral graft was planned. Alar web correction was also planned on the left side.

Under general anesthesia, an incision was made in the right inframammary region and a costochondral rib graft was harvested. A Valsalva maneuver was performed to ensure that there was no perforation into the thoracic cavity. The incision was then closed in layers with sutures.

Following this, a sulcular incision was made in the left anterior maxilla and a flap was elevated. The previously placed titanium plate and screws were removed. Left anterior maxilla was then augmented using the rib graft, which was fixed using titanium screws. Left nasal sill correction was next performed followed by closure of the incision with sutures.

A transcartilagenous incision was then placed in the right nostril with dissection up to the dorsum of the nose. The nasal dorsum was augmented using the costochondral graft. A strut graft was then placed. This was followed by closure using resorbable sutures intraorally and intranasally.

Successful correction of the patient’s complaints through surgery

The patient and her parents were extremely happy with the results of the surgery. There was tremendous improvement in the esthetics of her face. She now had a nose that was symmetrical and in harmony with her face. The patient expressed that she could now face the world with a renewed sense of confidence.