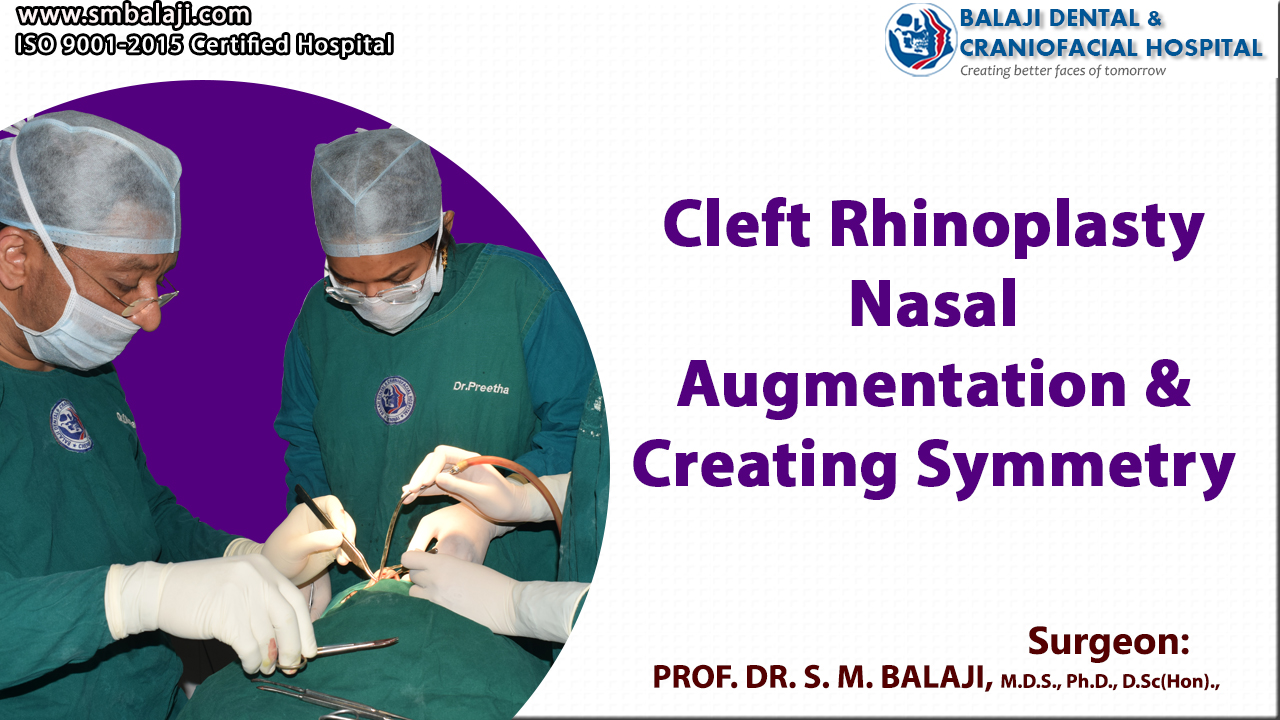 The patient is an 18-year-old female from Jhansi in Uttar Pradesh, India who was born with a right sided unilateral cleft lip and palate. Cleft lip is the presence of a gap in between the two halves of the upper lip. This is a developmental defect that happens in utero. Repair of cleft lip involves perfect integration of layers of skin and muscle tissues. A cleft palate is incomplete fusion of the roof of the mouth. Cleft palate repair would result in closure of this defect.

She had undergone cleft lip surgery at 3 months of age, cleft palate surgery at 8 months of age and cleft alveolus reconstruction at 4 years of age. All these surgeries had been performed by an oral surgeon at a local hospital.

The patient had developed an asymmetrical depressed nose along with hypertrophic scar from the cleft lip repair surgery. She had faced a lot of bullying in school and had always been a socially withdrawn person with few friends. The patient had become depressed of late and had begun to isolate herself inside the house. Her worried parents visited the oral surgeon who had referred her to our hospital for surgical correction of her deformities. The patient wished to have a symmetrical nose along with removal of the scar from the upper lip.

Social difficulties face by children with cleft lip and palate

Children born with cleft lip and palate deformity can face a lot of social difficulties. Bullying by peers is one of them. This usually occurs in the school setting. This is a result of these children being perceived as being different by other children. Parents have to be very sensitive and understanding while addressing these issues. Improper handling at this stage can lead to lifelong psychological scarring in these children.

Dr SM Balaji, cleft rhinoplasty surgeon, examined the patient and ordered comprehensive imaging studies. The patient had a unilateral cleft lip on the right side, which had caused the right side of the nose to become depressed. The right nostril was considerably smaller in size than the left nostril. There was also a noticeable scar near the right nasal sill.

Rhinoplasty surgery would be required for correction of the nasal asymmetry. A rhinoplasty is also known as the nose job. Correction of the nasal defect was planned through the use of a costochondral graft harvested from the patient. The nasal bridge was to be elevated using the costochondral graft. A strut graft would be used to correct the depressed right nostril. Revision of the scar from the cleft lip repair surgery was also planned for the patient. This was explained to the patient and her parents who consented to surgery.

Under general anesthesia, an incision was made in the right inframammary region and a costochondral rib graft was harvested. A Valsalva maneuver was then performed to ensure that there was no perforation into the thoracic cavity. The incision was then closed in layers with sutures. Scar revision surgery was next performed with the scar near the right nasal sill being excised.  A transcartilagenous incision was next placed in the left nostril and dissection done up to the dorsum of the nose. The nasal dorsum was augmented using the costochondral graft. A strut graft was then utilized to elevate the depressed right nostril. Closure was then done using resorbable sutures both intranasally and extraorally.

The surgery was a success with a resultant symmetrical nose along with excision of the scar from the sill of the nose. Esthetic improvement of the patient’s face was immediate. The patient and her parents expressed complete satisfaction at the outcome of the surgery. The patient now had a more symmetrical nose, which was in harmony with the rest of her face.

She expressed her joy and sincere gratitude to the surgeon. She was no longer afraid of fellow students teasing her.  She will now be able to lead a normal life with more self-confidence.