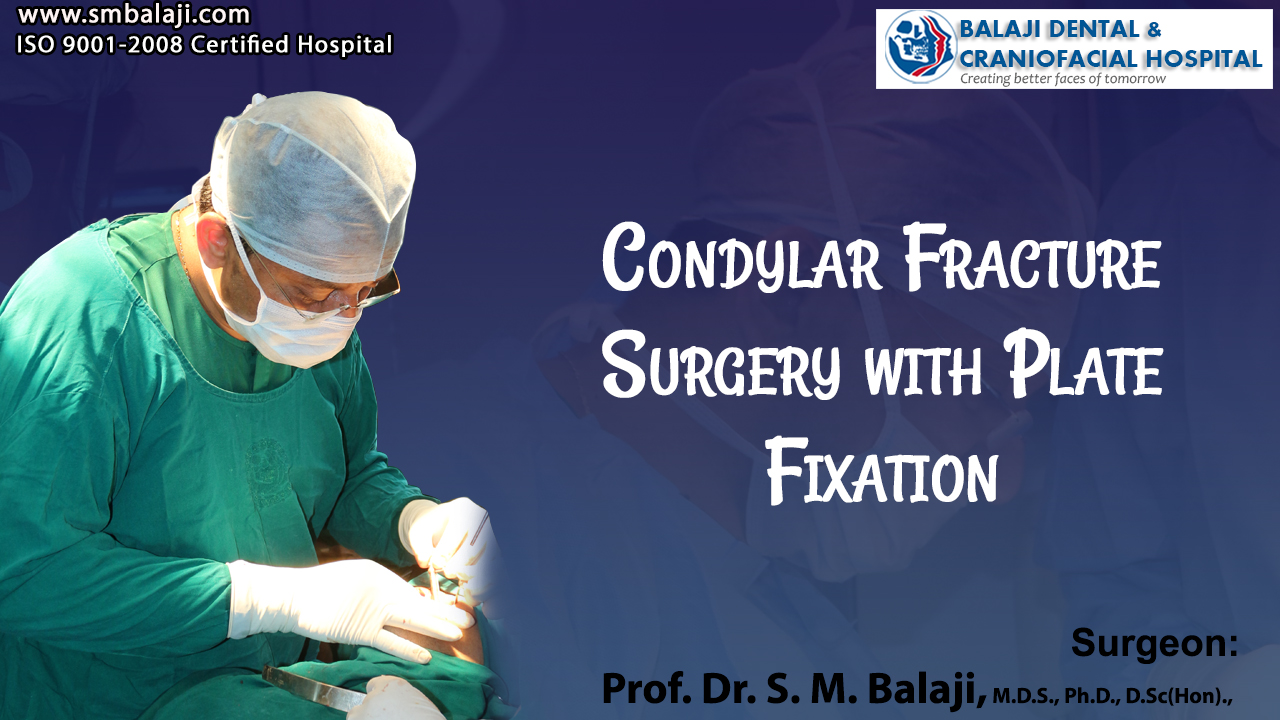 The patient is a 45-year-old woman from Chennai in Tamil Nadu, India. She was involved in a road traffic accident while crossing the road as a pedestrian. A speeding motorcycle knocked her down with her chin impacting the asphalt. The biker had immediately left the scene and she had been taken to a nearby hospital by onlookers. The patient suffered no external injuries from the impact. Her jaw was slightly displaced to the right side.

Referral to our hospital for treatment of her fractures

She complained of pain and difficulty opening her mouth upon initial presentation at the hospital. Imaging studies had been taken at the hospital and had revealed that she had fractured the right condylar head of the mandible. She had undergone condylar fracture surgery, but it had resulted in a malunited fracture due to the pull of the lateral pterygoid muscle.

Faced with eating and speech difficulties, the patient had presented again at the hospital. Realizing the complexity of the treatment involved to correct the malunited fracture, the doctor had immediately referred her to our hospital for management. Our hospital is a premier center for jaw fracture surgery in India. Even complicated comminuted jaw fractures are addressed at our hospital with excellent results.

Dr SM Balaji, jaw fracture surgeon, examined the patient and ordered comprehensive imaging studies including a 3D CT scan. Imaging studies revealed a displaced malunited condylar fracture on the right. The displacement was due to the pull of the lateral pterygoid muscle. Treatment planning was then done after ascertaining the extent of injuries. The patient had deviation of the mandible to the right side along with a right-sided posterior open bite.

It was explained to the patient that she would need re-fracture of the malunited fracture. This would be followed by internal fixation using titanium plates and screws. She would also need to stay on a liquid diet for about two to three weeks. This would be followed by a semi-solid diet for another week to ten days. The patient and her husband were in agreement with the treatment plan and consented to surgery.

Successful surgical reduction and stabilization of the fracture

Under general anesthesia, a modified Alkayat Bramley incision was made on the right side of the face. A flap was then elevated following which the malunited fracture site was exposed. The region of malunion was then refractured. This was followed by reduction of the displaced condylar segment. Occlusion was then checked and found to be perfect. The fracture was stabilized and fixed using titanium plates and screws. It was now resting stable within the glenoid fossa.

Special care was taken to ensure that the facial nerve was not damaged during the procedure. Facial nerve paralysis is a complication that could arise from the surgery. This is usually caused by intraoperative damage inflicted upon the facial nerve from its point of exit in the temporal bone during surgery. Care also has to be taken to not cause any injury to the parotid gland.

Immediate postoperative check for facial nerve function showed normal facial nerve function. The patient was able to furrow the forehead and open and close his eyelids. There were no complications arising from the surgery. Results were apparent immediately after the surgery. The patient was satisfied with the outcome of the surgery. She was able to open and close her mouth again with no pain or discomfort. There was also complete restoration of normal occlusion following surgery.