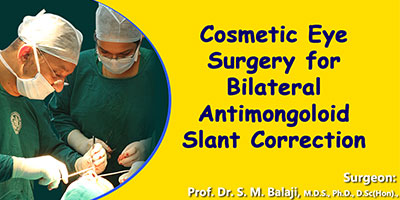 Occurrence of antimongoloid slant of the eyes

The shape of the eye and the eyelids is heavily influenced by genes. Each race is characterized by a particular eye and eyelid form. When the nasal corner of the palpebral fissure is higher than the temporal corner, it gives rise to an antimongoloid slant to the eyes. This is a genetic feature and is heavily influenced by hereditary factors. It is manifested by a slight downward slant to the lateral upper eyelids. This gives the eyes the typically narrow appearance.

Mongoloid slant to the eyes explained in detail

It is the opposite of the mongoloid slanting of the eyes where the temporal corner of the palpebral fissure is at a higher level than the nasal corner. This is a racial characteristic that is found amongst the Chinese, Japanese, Malay and other similar races.

Syndromes associated with antimongoloid slant to the eyes

Patient with the complaint of antimongoloid slant to the eyes

This patient had an antimongoloid slant due to the downward slant of his bilateral lateral eyelids. This led to a myopic or drooping appearance to his eyes. He felt uncomfortable with his appearance because of this. A friend recommended that he undergo cosmetic eye surgery to correct this. The patient presented to a local board certified plastic surgeon who referred him to our hospital.

Our hospital is a well known center for facial reconstructive surgery in Chennai. Dr SM Balaji examined the patient and explained that the patient needed plastic surgery similar to a brow lift procedure. He explained that the principle was the same as breast augmentation surgery. The technique used would be the same that was used to make sagging skin taut. The difference was that the tautening the skin involved removing excess skin. This however was not a case of excess eyelid skin. This was an anatomical variation that presented in approximately 0.5% of the population.

He said that droopy eyelids involved both upper and lower eyelids. It was illustrated to the patient that a downward tilt of the lateral upper lids of the eyes gave the antimongoloid appearance. This is a purely cosmetic procedure and has no functional aspect to it.

Principles of cosmetic eye surgery explained to the patient

The principle behind face lifts would be utilized to correct the antimongoloid slant. He said that the patient needed a facial cosmetic surgeon and referred him to our hospital. The cost of facial cosmetic surgery in India is very economical compared to the developed countries in the west. Facial plastic surgery in India is highly developed and very advanced due to the high demand. These surgery procedures are very commonly performed nowadays. It is a combination of these factors that had led to the explosion in medical tourism to India.

Cosmetic surgical procedures feature at the top of the list for medical tourism to India. Highly skilled medical professionals allied with excellent infrastructure provide very good results for the patients.

Dr SM Balaji, a well known facial cosmetic surgeon in India, next ordered a series of biometric studies as these surgical procedures demand a high degree of precision. Decision was made to perform cosmetic eye surgery. He made detailed measurements of the needed corrections. The surgery was then explained in detail to the patient. Patient agreed to the surgery and provided his consent.

Surgical correction of antimongoloid slant of the eyes

Under conscious sedation, a right lateral upper eyelid crease incision was first made. A fine Prolene suture was then used to suture the underlying tissues of the eyelid to the periosteum of the lateral orbital bone. Elevation of the lateral eyelid resulted in correction of the antimongoloid slant of the eye. Same procedure was then repeated on the left eye with similar results. The patient expressed total satisfaction at the results of the surgery.