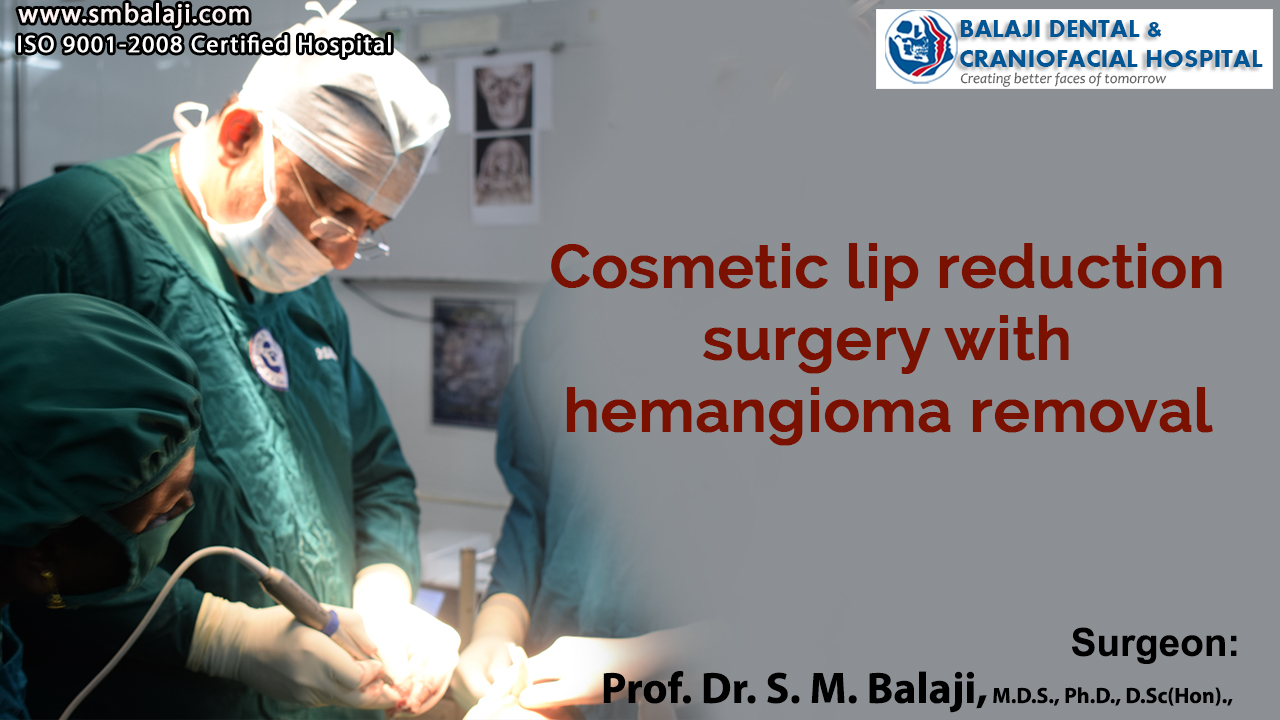 Patient with increasing lip deformity over the last ten years

The patient is a 33-year-old female from Hubli in Karnataka, India. She stated that she had been fine up until about 10 years ago. It was around that time that her lower lip began to gradually increase in size. This continued to grow in size until it became large enough to prevent closure of her mouth with loss of lip seal. Eating and speech also became difficult due to this. There was also significant facial cosmetic deformity because of her lower lip deformity.

She approached a local cosmetic surgeon around six years ago. He had examined her and had diagnosed it as a vascular lesion (hemangioma). His recommendation was for lip reduction surgery to reduce the lip back to its original anatomical dimensions. Surgery had been performed with reduction in the size of the lip. The lip however continued to grow and was back to its increased size within two years after surgery.

She had undergone another surgery at that point, which also proved to be of no avail in providing her with a permanent solution. In addition, she felt that the second surgery had caused a deformity to the shape of her lip. The patient began to feel hopeless and depressed by the situation.

Feeling very frustrated, she and her husband had made enquiries regarding the best hospital to undergo cosmetic lip surgery. They had subsequently been referred to our hospital. Our hospital is a leading center for various facial reconstructive surgeries.

Dr SM Balaji, cheiloplasty specialist, examined the patient and obtained a detailed oral history. Suspecting it to be a hemangioma of the lower lip, he then ordered an angiogram to confirm his diagnosis. The angiogram confirmed his initial diagnosis of hemangioma.

He explained to the patient and her husband that he planned to perform lip reduction surgery along with cauterization of the feeder vessels. Diathermy would be used to perform this. This would result in permanent resolution of the patient’s problems. They were in agreement with the treatment plan and consented to undergo surgery.

What is hemangioma and how is it treated?

Hemangioma is a benign vascular tumor derived from blood vessel cell types. The most common form is the congenital infantile hemangioma, commonly referred to as a strawberry mark. This is most commonly seen on the skin at birth or in the first few weeks of life. A hemangioma can occur anywhere on the body, but most commonly appears on the face, scalp, chest or back.

Treatment of hemangioma is usually unnecessary unless it interferes with vision or breathing, or in rare cases, internal hemangioma causes or contributes to other medical problems. It is also addressed when it leads to a cosmetic disfigurement for the patient. Hemangioma is usually treated by surgery or by injecting sclerosing agents into its feeder vessels.

Under general anesthesia, the lip hemangioma was excised in its entirety. Diathermy was used to make the incision and cauterize the feeder vessels to the hemangioma. Once proper lip form and contour had been established, hemostasis was achieved and the incision was sutured with resorbable sutures.

The patient was very happy with the outcome of the surgery. She was now able to close her mouth with ease and had a symmetrical lower lip. The size and form of her lip was now in complete harmony with the rest of her face. She was also very happy that there was no visible scarring from the surgery.