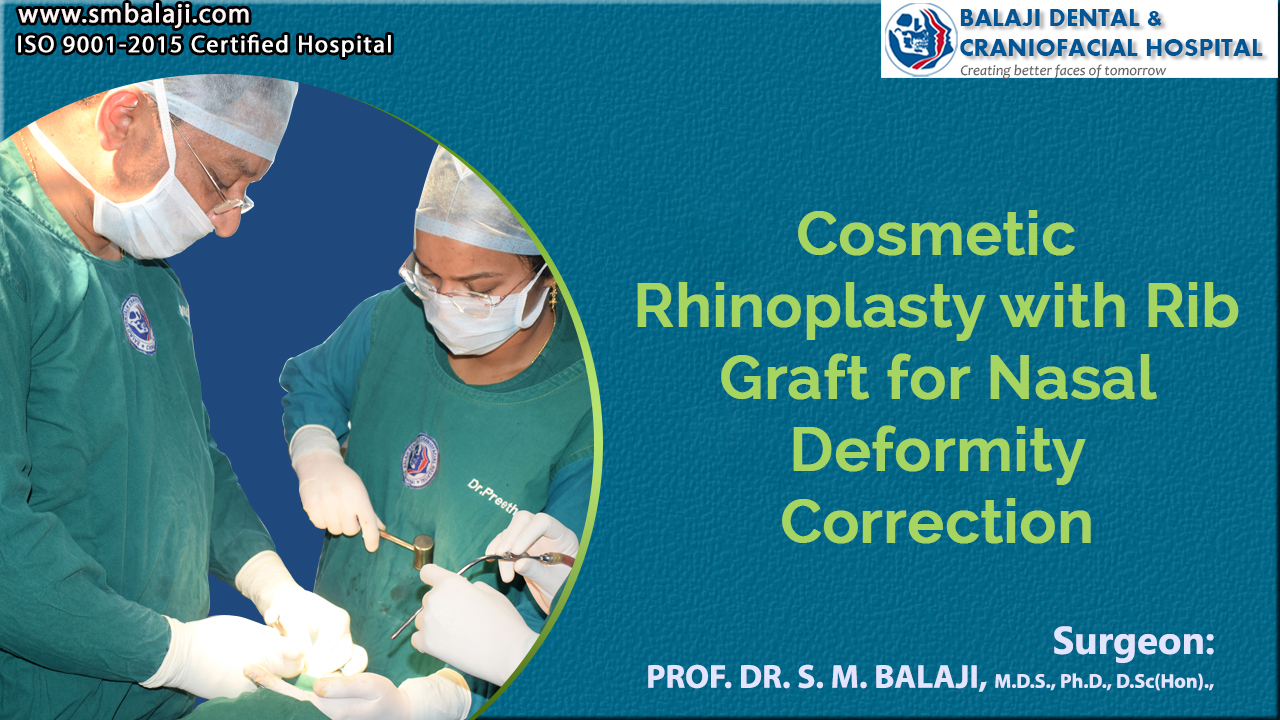 The patient is a 22-year-old male from Gudiyattam in Tamil Nadu, India. He had always felt that his nose did not suit his face. His main complaint was the lack of harmony between his nose and his face. He had always desired to get it corrected. This had even impeded his soto that the patient that he neededcial interactions over the years.

We are pioneers in cleft rhinoplasty correction and our hospital is credited with many surgical innovations. Many of these innovations have been adopted as surgical protocol throughout the world. Our hospital is a preeminent referral center for the World Craniofacial Foundation in this part of the globe.

Dr SM Balaji, cosmetic rhinoplasty surgeon, examined the patient and obtained a detailed history. The patient stated that he had always disliked his bulky nose and that it made him feel unattractive. He said that he always desired to have a narrow and elevated nose with a prominent tip. The patient also complained of significant snoring during sleep. Examination revealed that the patient had a significant nasal septal deviation.

What is a deviated nasal septum?

A deviated septum occurs when the dividing wall between the nostrils is displaced to either the left or right side. In many people, the nasal septum is off-center thereby making one nasal passage smaller. When a deviated septum is severe, it can block one side of the nose. This will directly result in reduced airflow and cause difficulty breathing.

A nasal blockage or congestion can occur from a deviated nasal septum. It can also result from swelling of the tissues lining the nose. Both these conditions can also exist concurrently.

Treatment planning for correction of the broad nose deformity

It was explained to the patient that he needed nasal bridge augmentation with costochondral graft placement. He would also require a medial osteotomy and a left lateral osteotomy to correct the nose. This would be followed by a tip graft for creation of a prominent tip.

The patient and his parents were in complete agreement with the proposed treatment plan and consented for surgery.

Under general anesthesia, an incision was made in the right inframammary region and a costochondral rib graft was harvested. Attention was next turned to the broad nose surgery. An intercartilaginous incision was first made. This was followed by placement of a tip graft to elevate the tip.

A medial osteotomy was then performed followed by a left lateral osteotomy.  Dissection was done following which the nasal bridge was augmented using costochondral graft. This resulted in complete correction of his broad nose deformity. Closure was finally done intranasally using resorbable sutures.

The patient and his parents were extremely pleased with the results of the surgery. They felt that this had drastically improved the esthetics of the patient’s face. The patient said that he now had a nose that was in harmony with the rest of his face. He said that he would now have new levels of self confidence to face the world.