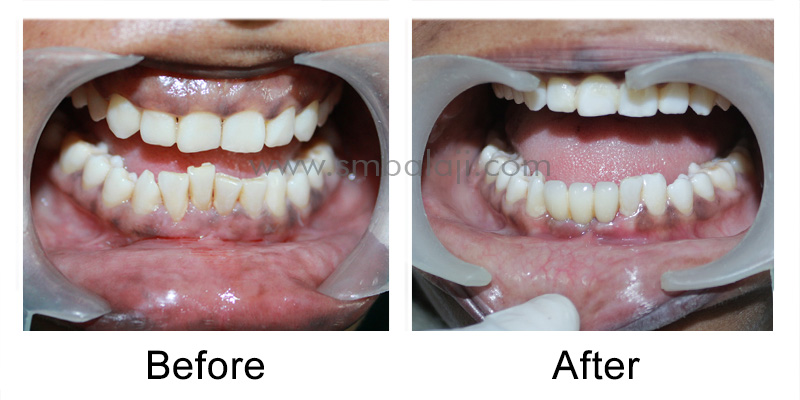 This is a case of a 32 year old female patient, who approached our dental hospital with a complaint of mobile lower front teeth. The patient stated that her lower anteriors started to shake a year back, which over time led to severe mobility. She was also concerned with the malalignment of her lower anteriors. As a result of mobility and crooked teeth, patient felt difficulty to bite food as it caused mild pain and discomfort. Patient wanted to correct her malalignment as well as find a solution for her shaking teeth.

Patient is said to be pre-diabetic and under medication for past 1 year.

On clinical examination, the patients lower anteriors appeared to be crowded and malaligned. The gum tissue surrounding the relative teeth seemed to have mild inflammation with bleeding on palpation.

On radiological examination,OPG taken shows moderate generalized bone loss in all teeth except for the corresponding lower anteriors which considerably had slightly more bone resorption, due to poor oral maintenance of the patient. A thorough blood analysis revealed no systemic abnormalities. Blood glucose level was under control.

With regard to the patients concern on malalignment and mobility, Dr S M Balaji planned to extract the shaking teeth in the lower front region and replace the missing teeth with dental implants under local anesthesia. Patient was briefed about the procedure and consent was obtained.

Under local anesthesia, the extraction of the corresponding lower front teeth was carried out following thorough irrigation of the extracted teeth socket. The gum tissue surrounding the site has been raised exposing the underlying jaw bone. Following that, dental implants of desired size were fixed in the bone. Final closure of the gum tissue was obtained with absorbable suture.

A three day course of antibiotics and painkillers has been prescribed to the patient to cope up with the post- surgical mild discomfort. Patient was educated on the post-operative oral maintenance instructions to be followed at home. The patient was asked to report after 3 months for placement of the final prosthesis, to ensure the dental implants integrates well with the jaw bone and to attain maximum stability and retention of the fixed prosthesis. Meanwhile, a removable prosthesis has been given to the patient to replace the missing teeth for the time being.

The patient reported after 3 months for the final procedure. Post- operative OPG taken shows well osseointegrated dental implants. Hence the final impression was taken and bite trails were seen. A natural looking fixed prosthesis was fixed on the implant. The prosthetic teeth looked very real and well aligned with the patient’s natural teeth, enhancing the patients look and smile. The patient was very happy with the outcome, as it was all that she needed.