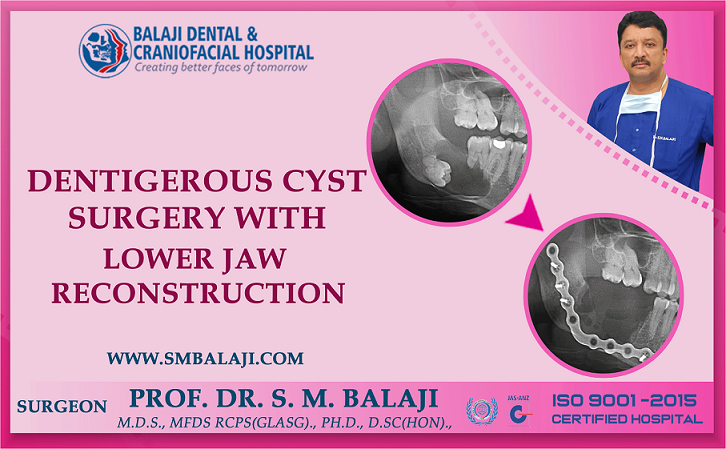 The patient is a 36-year-old man from Satna in Madhya Pradesh, India. He had developed pain and swelling in the molar region of his right lower jaw about six months ago. This had gradually increased in size with slight mobility of the first and second molars.

The patient is a cancer survivor. He had been diagnosed with carcinoma of the lung at the age of 32 years. Secondary to the diagnosis, he had immediately stopped smoking. Starting from the time of diagnosis, he had received chemotherapy and radiotherapy for a period of two years at a nearby city.

His cancer has been in remission since then and he is regularly followed by his oncologist. Of all the types of lung cancer, small cell cancer responds best to multidrug chemotherapy regimen.

Alarmed at the development of pain and swelling due to his history of cancer, he had rushed to his oncologist for advice. His oncologist had examined him and obtained an OPG. Realizing that the patient had a cystic lesion, the oncologist made widespread enquiries regarding the best hospital for addressing this new development.

Having received multiple recommendations about our hospital, he looked up our hospital on the Internet and spoke with Dr SM Balaji, Director and Consultant Oral and Maxillofacial Surgeon of our hospital. The patient had then been referred to our hospital for management of his cystic lesion. Our hospital is also a specialty center for orthognathic surgery.

Dr SM Balaji, dentigerous cyst surgeon, examined the patient and ordered imaging studies including a 3D CT scan. This revealed the presence of an impacted third molar in relation to the cystic lesion. There was extension of the cystic lesions up to the roots of the first and second molars. A biopsy confirmed the diagnosis of a medium to large dentigerous cyst.

In view of the patient’s history of treatment for carcinoma of the lung, it was decided that treatment would only address the cystic lesion. This would involve enucleation of the cystic lesion with fixation of a mandibular reconstruction plate. It was decided to utilize an intraoral approach to perform this surgery to enable easy healing of tissues.

Patients with dentigerous cyst usually undergo complete rehabilitation at our hospital. Treatment would include placement of rib grafts obtained from the patient followed by placement of dental implants. This would result in full restoration of function for the patient.

Under general anesthesia, a vestibular incision was made in the right molar region of the mandible. Dissection was carried down to the region of the dentigerous cyst. There was slight perforation of the buccal cortical bone. The impacted third molar was removed followed by enucleation of the cystic cavity.

Care was taken to ensure safety of the inferior alveolar and mental nerve throughout surgery. A Titanium mandibular reconstruction plate was then used to reconstruct the mandible. The incision was then closed with sutures and the patient recovered uneventfully from the surgery.

Nerve function testing was done and was found to be intact. The patient and his family were fully satisfied with the results of the surgery. They expressed their thankfulness to the surgical team before final discharge from the hospital.