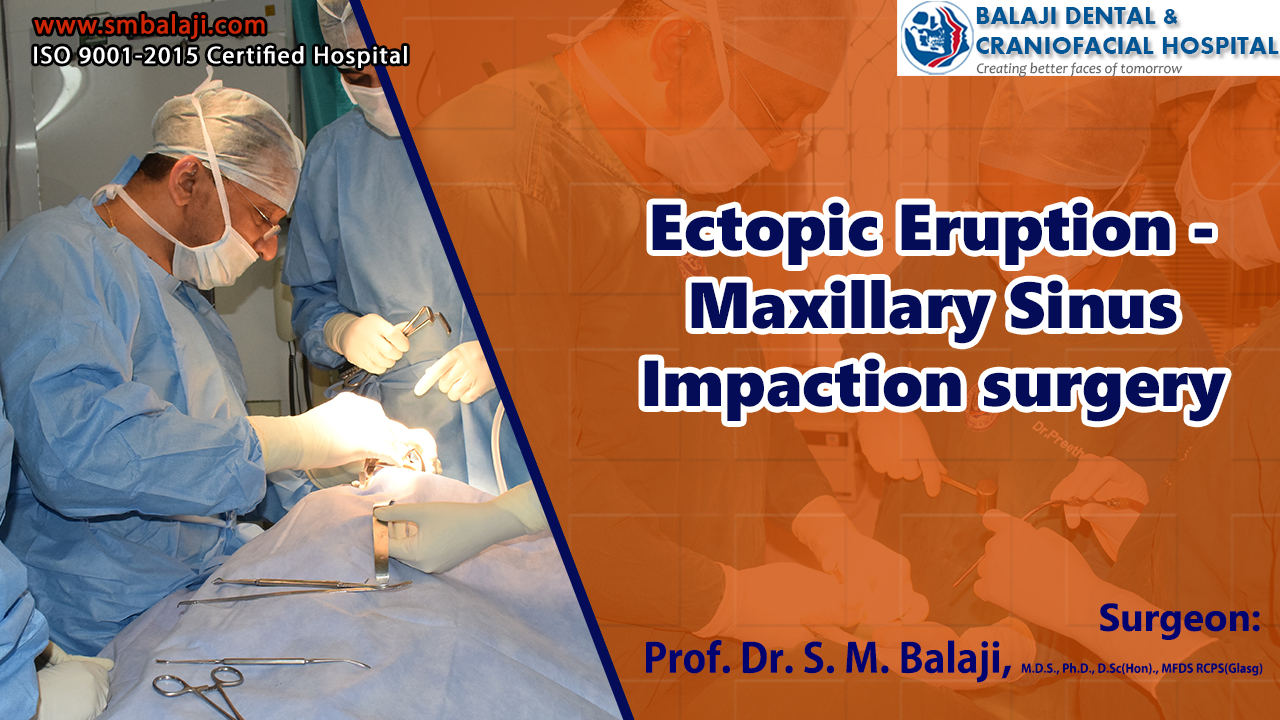 Patient develops discomfort and heaviness in right side of face

The patient is a 24-year-old male from Chennai in Tamil Nadu, India. He had developed a mild pain and a slight swelling in the right side of his upper jaw. This has been ongoing for the last 7-10 days. He has a history of sinusitis for the past few years.

The swelling had become noticeable and he had made enquiries regarding the best hospital to get this treated. He had been referred to our hospital by his family doctor.

Initial examination at our hospital

Dr SM Balaji, Oral and Maxillofacial Surgeon, examined the patient and obtained a detailed history. A 3D CT scan was obtained to fully visualize the maxillary sinus. This revealed that the sinus was filled with exudate. There was also an impacted third molar, which was found embedded in the floor of the orbit within the sinus cavity.

This was diagnosed as an ectopic third molar. Removal of such ectopically impacted teeth has to be performed with utmost care due to its proximity to the orbital floor. Training for simple impactions are imparted to postgraduate students in dental schools. Complicated impactions such as this need to be performed by experienced oral and maxillofacial surgeons.

It was explained to the patient and his parents that this needed to be removed surgically. The contents of the sinus cavity would also be cleared during surgery. They were in full agreement with the treatment plan and consented to surgery. Caldwell Luc procedure is the technique of choice for such impactions.

Our hospital is a specialty center for Oral and Maxillofacial Surgery. Jaw joint surgery, orthognathic surgery, surgery for removal of odontogenic cysts and facial trauma surgery.

Presence of an ectopic tooth and its implications

Ectopic tooth eruption in the maxillary sinus is usually an incidental finding that is discovered during routine radiological examination. They could also become symptomatic and cause discomfort and pain as in the case of this patient. Development of a dentigerous cyst in relation to an ectopically erupted maxillary third molar within the maxillary sinus is very rare. These impactions can also arise from displaced dental follicles.

Ectopic eruption occurs when a tooth is displaced from its normal position. This could be from pressure caused by pathological conditions such as cysts. It can also be idiopathic with displacement of the tooth bud occurring during development. This results in its eruption at an abnormal site. Such ectopic eruptions are most commonly seen in the dentate region.

The impacted right third molar was removed. This was followed by irrigation of the sinus with antibiotics and closure of the wound with sutures.

There was complete resolution of the patient’s swelling and discomfort at the time of checkup. The patient and his parents expressed their satisfaction before final discharge from the hospital.