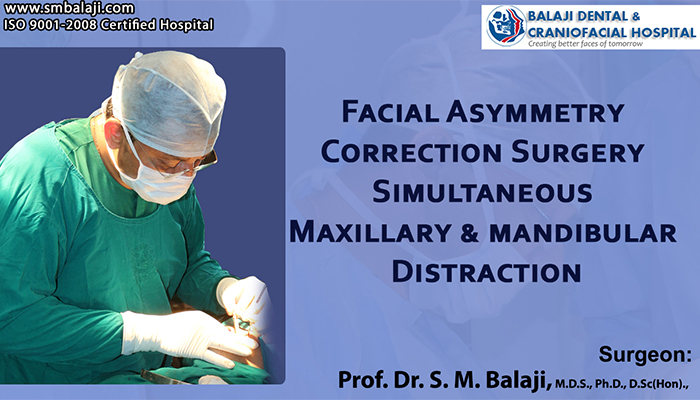 The patient is a young man from Thrissur, Kerala with hemifacial microsomia. His parents had slowly begun noticing a facial asymmetry as he grew up. The left side of the jaw was shorter than the right side as the corpus of the mandible was not growing normally and there was also a deformity of the left maxilla. He had also progressively developed difficulty chewing and with his speech.

They approached a local oral surgeon for diagnosis and treatment. It was explained to them that the patient had a high degree of facial asymmetry with a skewed occlusal cant. The surgeon had then informed them that facial asymmetry surgery in India was performed only in a few specialty centers. The patient and his parents were then referred by him to Balaji Dental and Craniofacial Hospital in Chennai.

Dr SM Balaji examined the patient and ordered detailed imaging studies including a 3D CT scan. Facial biometrics were then obtained, which revealed a 10 cm shortening of the ramus on the left side when compared to the right. It was decided to proceed with simultaneous maxillary and mandibular distraction for the patient. The treatment planning was explained in detail to the patient and his parents who consented to the surgery.

Under general anesthesia, a sagittal split osteotomy was performed on the left mandibular ramus. A Univector ramus distractor was then fixed with screws to the distracted segments of the mandible. Functioning of the distractor was checked before the incision was closed with sutures.

This would result in establishment of facial symmetry for the patient. The patient and his parents expressed their satisfaction at the results of the surgery before final discharge from the hospital.