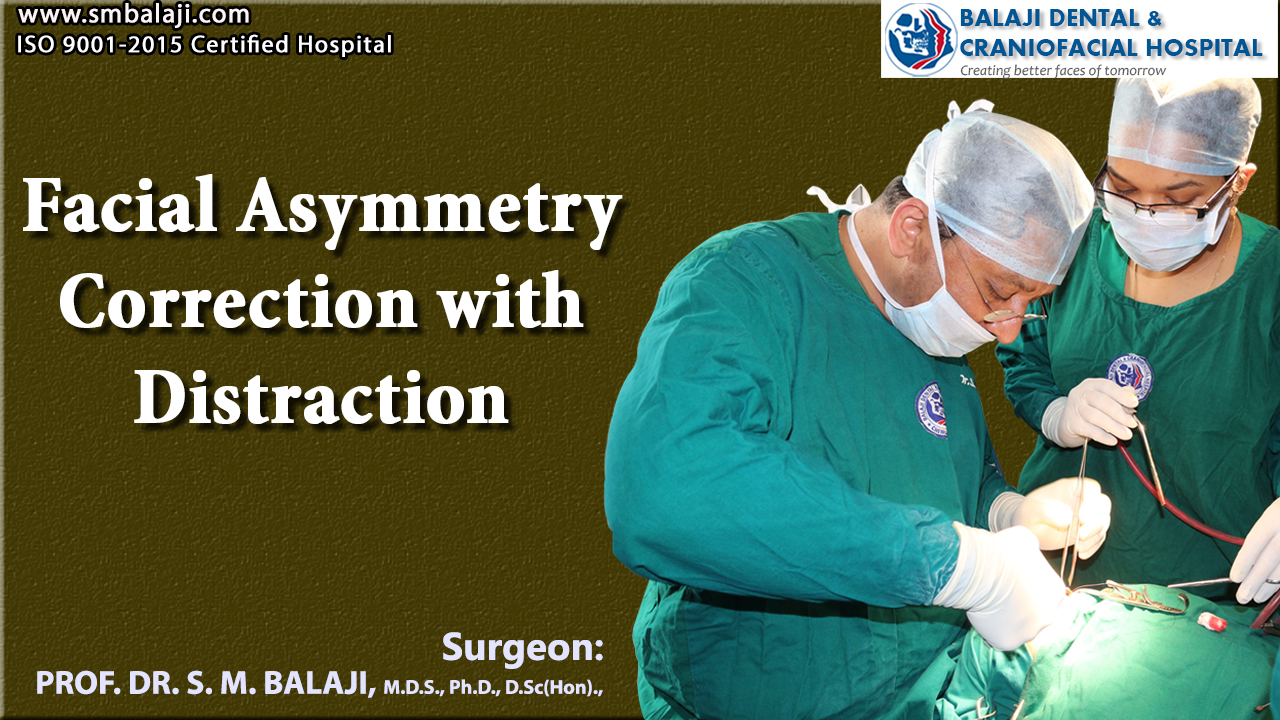 The patient is a 21-year-old male from Kottayam in Kerala, India. He has had lower jaw asymmetry since his childhood. This had resulted in an asymmetrical face. There is however no history of any trauma or accidents to his jaw. This has been slowly becoming progressively worse throughout his growing years. There was also a component of open bite to his occlusion.

Chewing and speech problems had also increased exponentially with the passage of time. It has now reached a point where his lower face has become grossly deformed. This had affected him a lot and he had become socially withdrawn.

Problems in a social setting due to his facial deformity

This had led to considerable bullying in school and the patient had always been socially withdrawn. He had lost his self confidence due to his facial appearance and had very few friends. The patient’s parents stated that he was very depressed and they were worried about his well being.

They had taken him to a local oral and maxillofacial surgeon who had examined the patient. Realizing the complexity of the patient’s treatment needs, he had referred the patient to our hospital for management.

Our hospital is a specialty center for distraction osteogenesis surgery in India. Distraction osteogenesis is the technique used for bone lengthening. We were one of the first hospitals in India to utilize this method for jaw correction surgery. Patients with hemifacial microsomia are routinely treated for facial asymmetry.

Mandibular lengthening is routinely performed in our hospital through mandibular distraction osteogenesis. Our hospital is a referral center for many countries from South East Asia and Europe.

Dr SM Balaji, facial asymmetry surgeon, examined the patient and ordered for comprehensive imaging studies including a 3D CT scan. The right side of the patient’s mandible was longer than the left side. This had resulted in his gross facial asymmetry. The left side was noted to be deficient. There was also an obvious occlusal cant present.

Even though the defect was observed to be on the right side, it was decided that the patient needed to undergo treatment on the left side to correct the facial asymmetry. It was decided to utilize distraction osteogenesis on the left mandible to increase its length. A Univector mandibular ramus distractor was planned to be fitted on the left side.

This treatment was explained to the patient in detail who consented to surgery. The patient was scheduled to undergo facial asymmetry correction with distraction osteogenesis

Surgical correction of the facial asymmetry

Under general anesthesia, an incision was made in the left mandibular retromolar region. A flap was elevated followed by bone cuts. A Univector mandibular ramus distractor was then fixed on the left side using titanium screws. Extreme care was taken throughout to ensure that the inferior alveolar nerve was not damaged during mobilization of the distal segment of the mandible.

Following successful fitting of the distractor, correction of the occlusal can was addressed next. A sulcular incision was placed in the maxilla followed by. Le Fort I bone cuts. The maxilla was then mobilized and the posterior end of the left maxilla was fixed using transosseous wires.

Hemostasis was achieved and closure was done using sutures. This was followed by Intermaxillary fixation using stainless steel wire. The patient was then taken to the recovery room in stable condition.

Postsurgical consolidation of bone before distraction

A latency period of about 6-7 days was allowed after surgery. Following the latency period, the distractor was activated with a distraction of 1 mm every day. A total of 13 mm of bone distraction was achieved over the next two weeks. There was symmetry of the two sides of the mandible at the end of this period.

A week later, a plate was fixed to the left posterior maxilla to prevent any further downward movement.  The distractor was then removed after a period of about 3-4 months following bony consolidation at the site of mandibular distraction.

The patient started noting the changes during the distraction phase itself. He was extremely happy at the end of the distraction phase of the treatment. This had resulted in good facial harmony through correction of his asymmetry. He stated that he was now ready to face life with a new found confidence.