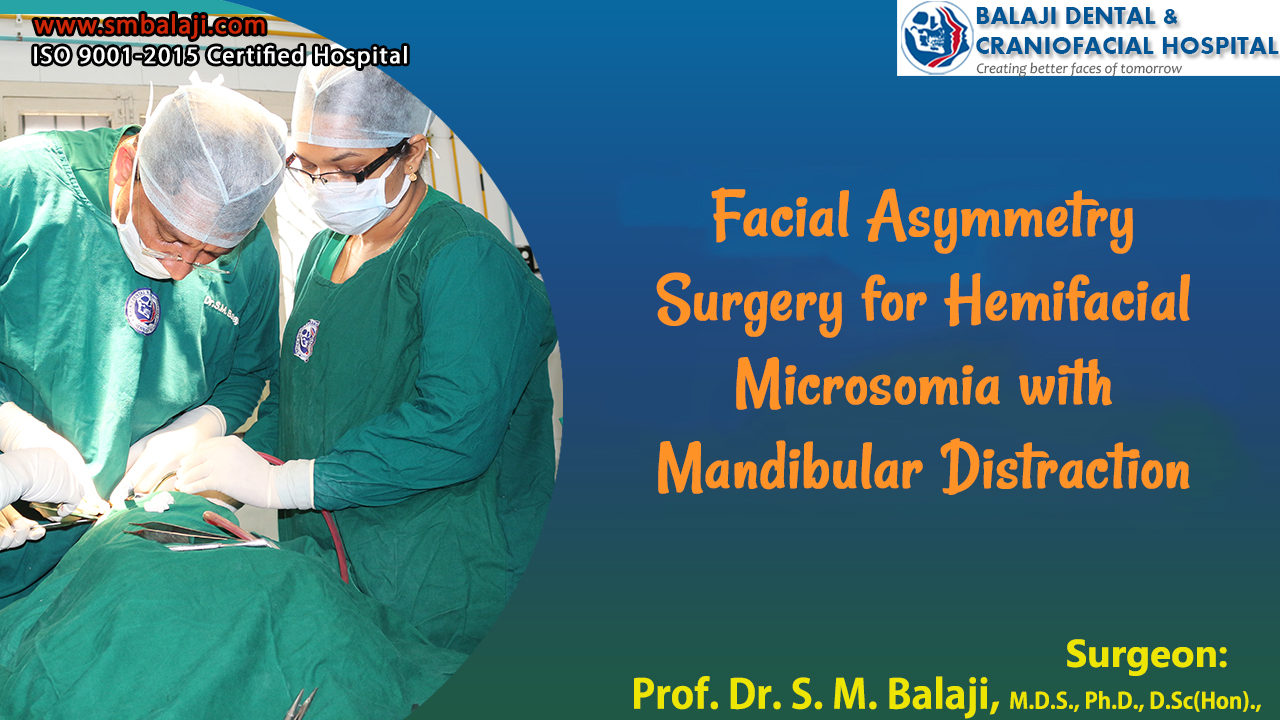 The patient is a 16-year-old male from Secunderabad in Telangana, India. His parents state that he had been born with a deformity of the mouth with a right lateral facial cleft. This is commonly known as macrostomia. He had undergone surgery for correction of his microstomia during his childhood. The parents stated that the patient has always had residual scarring from that surgical procedure.

A gradually developing facial asymmetry was soon noted by the parents with the passage of time. There was underdevelopment of the right side of the face, which was becoming worse. The patient had undergone testing, which had returned with the diagnosis of hemifacial microsomia. It has now reached the point where the patient’s face demonstrated extreme asymmetry of the two sides.

The patient had become completely dejected and depressed by this progressive development of facial deformity. He had faced a tremendous amount of bullying at school, which had made things worse for him. It has now reached the stage where he is refusing to attend school or at times even leave the house to attend social gatherings.

The parents then began their quest at finding the right hospital for their son’s treatment. They had made enquiries all over the country. These enquiries had finally led them to our hospital. Our hospital is a premier center for hemifacial microsomia surgery in India. Scores of patients have been successfully rehabilitated in our hospital and are now leading normal lives.

Hemifacial microsomia is a congenital disorder that affects the development of the lower half of the face. It most commonly affects the ears, the mouth and the mandible. It usually occurs on one side of the face, but rarely involves both sides. When severe, it may result in breathing difficulties due to obstruction of the trachea, which might even require a tracheotomy.

Incidence of hemifacial microsomia is in the range of 1:3500 to 1:4500 live births. This is the second most common birth defect of the face after cleft lip and cleft palate. Lateral facial clefts arise from the failure of the maxillary and mandibular prominences to fuse at the lateral commissure. This gives rise to macrostomia.

Initial presentation and consultation at our hospital

Dr SM Balaji, facial asymmetry surgeon, examined the patient and ordered for comprehensive imaging studies. The patient had a noticeable scar on his right cheek from the lateral facial cleft correction. There was also a gross facial asymmetry on the right side. The patient also had an occlusal cant due to his mandibular deformity. A 3D CT scan revealed a deformed right mandible with a hypoplastic ramus.

It was explained that he needed to undergo mandibular ramus distraction osteogenesis surgery. This would be on the right side and would correct his facial asymmetry. A Le Fort I maxillary osteotomy was also planned for correction of the asymmetry and the occlusal cant. Facial symmetry is established when it is used for correction of asymmetrical mandible.

Clinical application of distraction osteogenesis covers the entire skeleton. It is used for limb lengthening in case of limb length discrepancy. This is very safe and the resulting bone structure is both stable and strong. Soft tissue molding also happens concurrent with the bone lengthening. Bone grafts are unnecessary for this procedure.

Under general anesthesia, an incision was first made in the right submandibular region. Dissection was done up to the right mandibular ramus. This was followed by horizontal bone cuts to the outer cortex following which the mandibular ramus distractor was fixed using titanium screws. The inner cortex was then separated. Extreme care was taken to protect the inferior alveolar nerve throughout the procedure.

Following this, a sulcular incision was made in the maxilla followed by a Le Fort I osteotomy. The maxilla was then mobilized. Hemostasis was achieved and closure was done using resorbable sutures. Interarch wiring was then done to stabilize the surgical site.

Postsurgical phase of the treatment

A latency period of about six to seven days was allowed after surgery for stabilization of the surgical site. Following the latency period, activation of the distractor was begun. This was by 1 mm every day for a period of 25 days to achieve a total mandibular advancement of 25 mm on the right side. Distraction was stopped after this period. A period of two more weeks were allowed before fixation of a straight plate to the left posterior maxilla to prevent further downward movement.

Successful completion and rehabilitation of the patient

After a period of about four months, radiographs were obtained to evaluate the site of distraction. This revealed complete consolidation of the bone with a reformation of a patent inferior alveolar nerve canal. The patient was extremely happy with the esthetic results of the surgery. He had a symmetrical face as well as normal occlusion with stabilization of the occlusal cant.