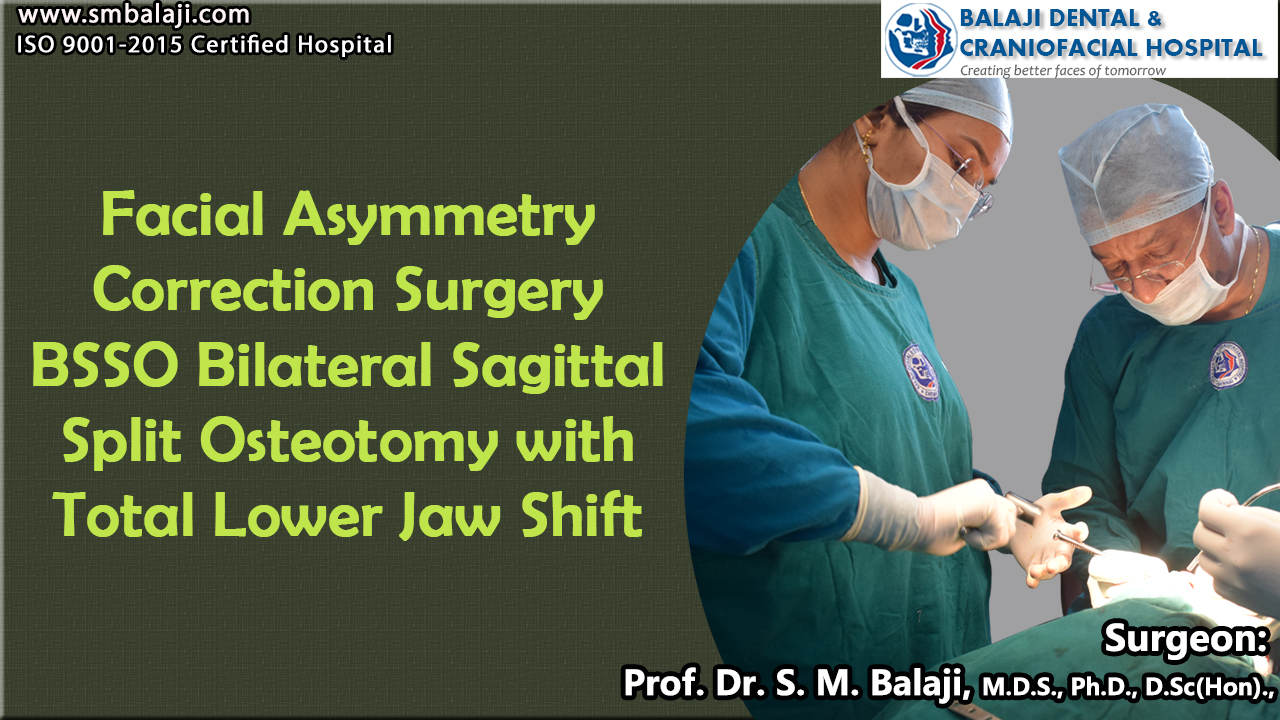 Patient with lower jaw problems for a long time

The patient is a 19-year-old boy from Malkajgiri in Telangana, India who has had jaw problems as long as he can remember. His lower jaw was longer than his upper jaw and had been deviated to the left side with a resultant crossbite. This had detracted not only from the esthetics of his face, but has also caused him difficulties with speech and eating. Social interactions have always been a difficult area for the patient because of this. The patient stated that he has no history of any injury to his jaw region that could have resulted in this. Of note, interestingly, the patient’s brother as well as father also had mandibular prognathism for which they underwent surgery with full resolution of the problem.

He complained to his parents that he wanted this corrected as it was getting to be extremely difficult to handle this with the passage of years. His parents too felt that this needed to be addressed and they visited a local oral surgeon who had examined the patient thoroughly and obtained comprehensive imaging studies. He explained that the patient needed corrective jaw surgery followed by fixed orthodontic therapy to correct the malaligned teeth.
The oral surgeon further advised that this surgery was a complex procedure and said that only a few specialty centers in India performed this. He therefore referred the patient to our hospital, which is a premier center for jaw correction surgery in India. We are also renowned for orthognathic surgery in India.

What is the meaning of mandibular prognathism?

Mandibular prognathism is a positional relationship of the mandible or maxilla to the skeletal base where the lower jaw protrudes beyond the upper jaw, thereby leading to malocclusion. The word prognathism derives from the Greek πρό (pro, meaning “forward”) and γνάθος (gnáthos, “jaw”). One or more types of prognathism can result in the common condition of malocclusion, in which an individual’s top teeth and lower teeth are not aligned properly. Correction of this condition is through both surgery as well as fixed orthodontics

Dr SM Balaji, facial asymmetry surgeon, examined the patient and obtained comprehensive imaging studies. This revealed that the mandible was deviated to the left side with a crossbite. It was advised that the patient undergo lower jaw correction surgery for correction of his facial asymmetry. He was further advised to undergo orthodontic treatment for management of his dental malocclusion. The patient and his parents were in agreement with the proposed plan of treatment and consented to the surgery.

Our hospital strictly adheres to the protocols laid by the American Association of Oral and Maxillofacial Surgeons with regards to performance of all surgical procedures. Facial asymmetry surgery is a procedure that not only requires a high degree of surgical skill, but also requires an eye for esthetics on the surgeon’s part. The two halves of the face have to be perfectly balanced in order to produce true facial harmony and ideal esthetics. Long term stability of the results can be ensured by strict adherence to these protocols.

Under general anesthesia, eyelets were first placed in both jaws. Following this, incisions were placed in the mandibular retromolar region bilaterally. Flaps were elevated, bone cuts were made and bilateral sagittal split osteotomy done. The mandible was rotated to the right side and pushed backward so that correct occlusion was achieved along with complete correction of the facial asymmetry. It was then fixed in the new position using titanium plates and screws. Closure of the two incisions was then performed using resorbable sutures.

Full patient satisfaction at the outcome of the surgery

The outcome of the surgery was immediate and the patient was very happy with the results. He now had a completely normal occlusion and his facial asymmetry had also been corrected. He said that he would now have the confidence to face the outside world bravely. Orthodontic treatment would be performed at a later time for correction of his malaligned teeth.