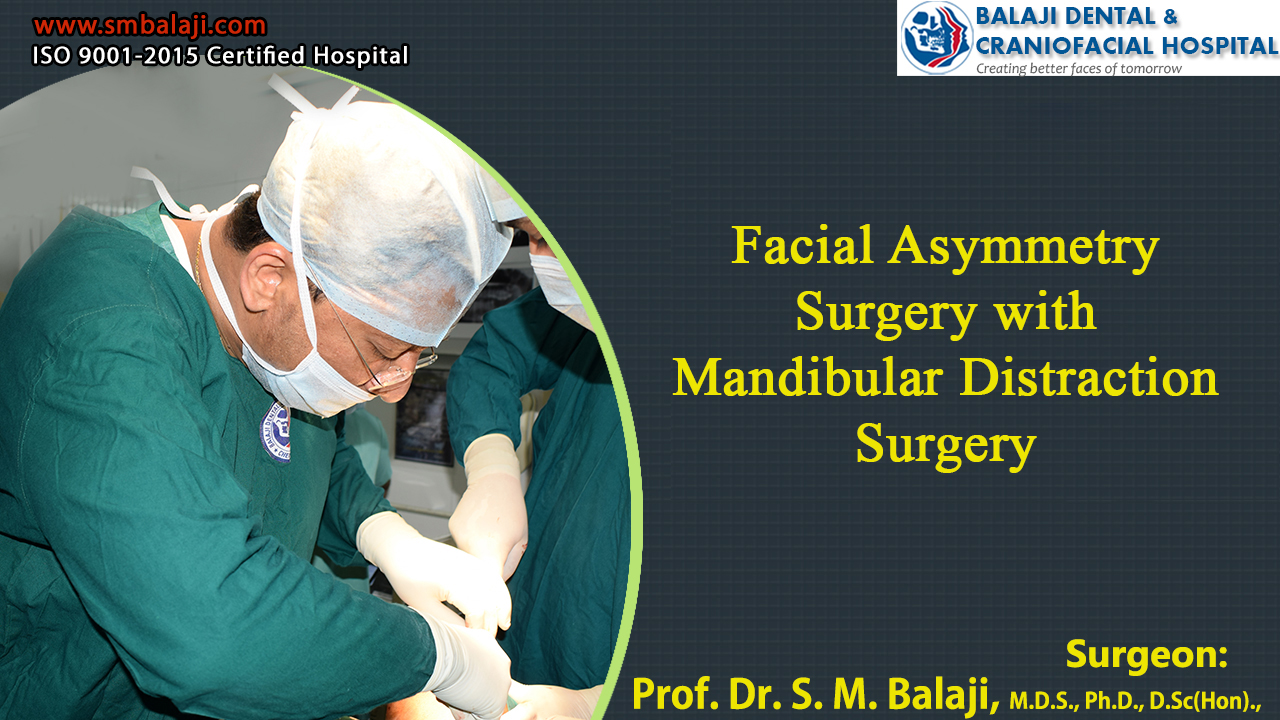 The patient is a 31-year-old medical doctor from Gwalior in Madhya Pradesh, India. He has had significant facial asymmetry since forever. This began as a slightly asymmetrical appearance of his lower face. Feeling very self conscious about this, he had developed the habit of tilting his head towards the affected side onto his shoulder. He has had this habit for years now.

This has resulted in a chronic neck pain for the patient. The neck pain too has been present for a few years now. This had been a constant irritation for him for a long time now.

Of late, this neck pain had intensified and this had alarmed the patient. He had presented at a local hospital for a consultation with an oral surgeon. Following a detailed examination, the diagnosis of mandibular asymmetry had been made for the patient. The oral surgeon had advised the patient that he needed distraction osteogenesis for correction of his facial asymmetry.

He had then referred the patient to our hospital for facial asymmetry surgery and orthognathic surgery. Our hospital is one of the premier centers for distraction osteogenesis in India. Facial plastic surgery is a specialty procedure at our hospital. Patients from around the world including from the developed Western nations come to our hospital for this treatment.

Facial asymmetry correction at our hospital has restored normalcy to the lives of scores of patients with facial disfigurement.

Initial presentation and consultation at our hospital

Dr SM Balaji, distraction osteogenesis surgeon, examined the patient and obtained a detail history. It was very evident that the patient’s head posture of leaning on his left shoulder was to conceal the facial asymmetry. This had directly led to the patient developing neck pain.

Under general anesthesia, an incision was made in the left mandibular retromolar region. A flap was then elevated to expose the mandibular bone. Bone cuts were then made on the outer cortex followed by fixation of the mandibular ramus distractor with titanium screws.

The bone of the inner cortex of the mandible was then cut. Extreme care was taken to ensure protection of the inferior alveolar nerve throughout the procedure.

Attention was next turned to the maxilla. A sulcular incision placed in the maxilla followed by Le Fort I osteotomy and mobilization of the maxilla. The posterior end of the left maxilla was then fixed using transosseous wires. Hemostasis was achieved and closure was done with sutures.

Interarch wiring was then done to stabilize the occlusion. This was followed by a latency period of about six to seven days. Following the latency period, the distractor was activated to achieve 1 mm advancement of bone each day. After achieving a satisfactory increase in length of about 16 mm, the distraction was stopped.

This was followed by another latency period of one week. A plate was then fixed to the left posterior maxilla to prevent further downward movement.  The distractor was finally removed after a period of three to four months. Adequate consolidation of bone at the distraction site was demonstrated through radiographs. This would ensure that the patient could return to a completely normal diet.

Final outcome of the surgery

The patient began noticing that there was gradual correction of his facial asymmetry during the distraction phase. He was extremely satisfied at the end of the distraction treatment. The patient’s head posture gradually improved and had completely normalized by the time of distractor removal surgery.

He expressed his complete satisfaction at the results of the surgery. Resolution of his neck pain had completely transformed him. He said that he could once again fully concentrate on his medical career now that his facial deformity had been corrected.