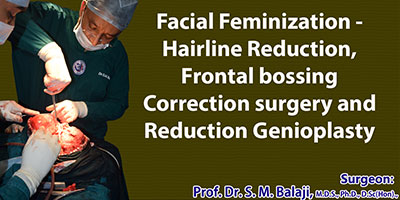 The patient is a young man from England. He had always felt that he was a woman trapped in a man’s body. It took him a while, but he finally decided to go ahead with his decision of becoming a woman. His parents were very supportive of his decision. He had undergone reduction genioplasty surgery. The results left him disappointed.

Internet search leads the patient to our hospital

It was then that they decided to research the Internet. Together, they searched for a good surgeon for facial feminization surgery. The patient had typical male frontal bossing and a prominent chin. He also desired for hairline reduction. Their search led them to our hospital.

Attention was then turned to the reduction genioplasty. A vestibular incision was first made in the anterior mandibular buccal sulcus. Dissection of the tissues exposed the genial tubercle. The patient’s genial tubercle had a typical prominent masculine structure. The plates from his previous surgery were first unscrewed and removed. Osteotomy was then performed with an oscillating saw. The chin was then fixed again with plates after adequate removal of bone. Four holed Y shaped plates were then used to aid to stabilize the osteotomy site. The fixation was very stable. This resulted in good genial reduction.

Incisions were then made in the posterior region of the mandible. Plates from the previous surgery here were then removed. Bone obtained from the reduction genioplasty was then screwed in place here to obtain a good gonial angle. All incisions were then closed with sutures. The patient recovered well from general anesthesia.