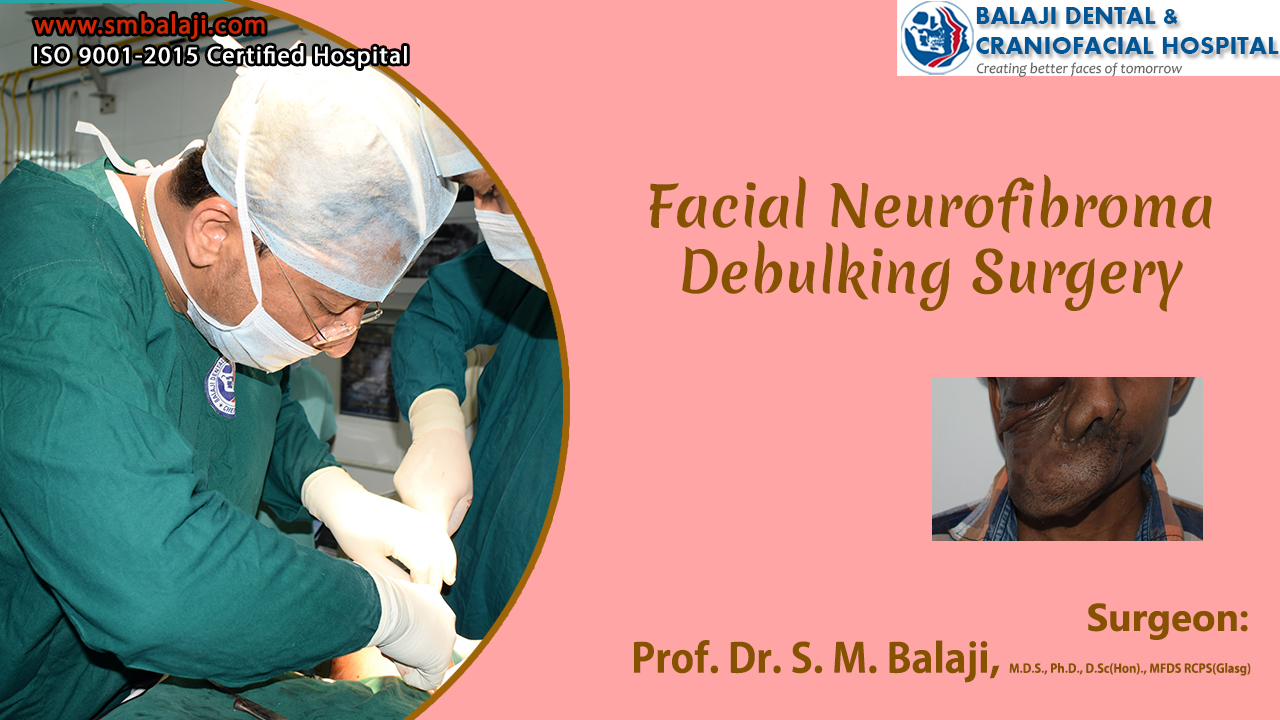 The patient is a 19-year-old boy from Karaikudi in Tamil Nadu, India. His parents first noticed the development of a facial deformity when he was around 4-5 years old. This had slowly progressed to the point where there was gross deformity of the right side of his face. He had slowly lost confidence with the passage of time and became depressed because of this.

They had presented to a local surgeon when he was 14 years of age. A detailed history was obtained from the patient and he was subsequently diagnosed with neurofibromatosis of the right side of the face with a sagging lip.

The excessive growth has caused a great deal of hardship for the patient, resulting in difficulty with eating and speech. The patient had already lost his right eye sight due to this condition.

Having confirmed the diagnosis of neurofibromatosis, the surgeon had advised to remove the excessive tissue surgically. The patient and his parents had consented to surgery and the patient underwent surgery.

However, the overgrowth recurred shortly and worsened considerably over the years. It has now reached the point where it has become a hindrance to the patient’s activities of daily living. They then made extensive inquiries regarding the best hospital to address this problem and had been referred to us.

Patient and his parents presented at our hospital

Dr SM Balaji, neurofibroma surgeon examined the patient and ordered for imaging studies including a 3D CT scan. Examination revealed that tumor grown was extensive and had caused the right side of his face to sag downwards.

The right lateral border of the lip was also sagging downwards. His eye was also infected and appeared larger in size. There were also numerous Café au lait spots seen all over the patient’s body. The patient manifested all the signs and symptoms of neurofibromatosis.

Dr SM Balaji has extensive experience of over 25 years as a cosmetic surgeon and this facet has immensely helped to rehabilitate patients with gross facial deformities. Many patients have had their lives restored to complete normalcy after undergoing cosmetic facial surgery at our hospital.

Etiology and pathogenesis of neurofibromatosis

The first is manifested as light brown spots on the skin along with freckles in the armpit and groin. There are also small bumps within the nerves and scoliosis. Second is manifested by hearing loss, cataracts at a young age and balance problems. There are also flesh-colored skin flaps and muscle wasting.

This condition is caused by a genetic mutation in certain genes. They can be inherited from parents or can develop spontaneously during early development. The tumors affect the supporting cells of the nervous system and not the neurons.

It is very rare that cancerous tumors arise from this condition and only an extremely small percentage of the general population is afflicted by this condition.

There is no known prevention or cure. Surgery may be done to remove tumors that are causing esthetic problems or have turned cancerous.

Treatment planning explained to patient and parents in detail

An elliptical incision was made on the right side of the face and excess neurofibroma tissue was excised. A Weir excision was also done on the right nostril to create symmetry of the nose. Lip level was also adjusted and all incisions were closed with non resorbable sutures.

Successful surgical outcome of the surgery

The patient and his parents expressed their happiness to Dr SM Balaji. An immediate result of the surgery was the improved ability to eat and easier speech. His facial profile was also greatly improved and they were happy with the outcome of the surgery.