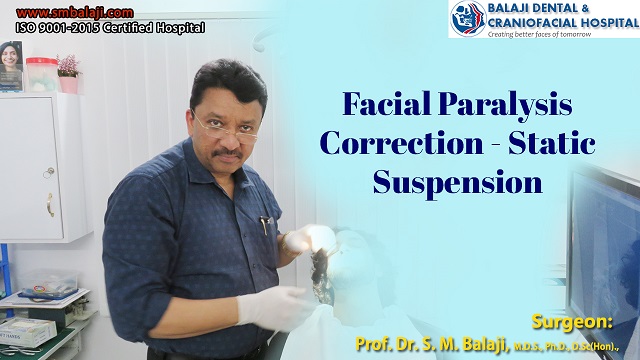 What is Facial Paralysis?

Bell’s palsy can be caused by a viral infection. It almost never happens more than once.
Bell’s palsy is described by muscle weakness, which causes one-half of the face to droop.
Bell’s palsy normally goes away on its own after six months. Physiotherapy can help prevent muscles from contracting indefinitely.

Patient with Facial Paralysis seeks Solution for his Problem

The patient is a 27-year-old male from Rourkela in Odisha, India. He has had long-standing facial paralysis on the right side of his face. There was a drooping of the corner of the mouth on the affected side. He had tried a variety of medical treatments, which failed to address his problem.

Referral to our Hospital for Treatment of his Condition

This had left him feeling very frustrated. Seeking a solution, he had visited a cosmetic surgeon in his hometown. He underwent a dynamic reanimation with temporalis reanimation surgery. There was no improvement in his facial paralysis and this surgery was a complete failure.

An internet search for the best facial paralysis surgery hospital in India had brought up our name. Having satisfied himself with the search results, he contacted our hospital manager and fixed an appointment for an initial consultation.

We offer advanced treatments with the latest innovations from around the world. The cost of lip paralysis surgery in India is a fraction of what it costs in the West. Board-certified plastic surgeons often perform these surgeries in Europe and Japan.

Facial reanimation surgery is also performed in our hospital. Patients come from around the world for this surgery. The patient regains the ability to emote following this surgery.

Surgery for Correction of Facial Deformities

Many conditions lead to facial asymmetry. The asymmetry can either be isolated to the soft tissue like in facial paralysis. It can also be due to underlying bony deformities. Facial palsy is caused by loss of innervation to facial muscles on one side supplied by the facial nerve.

Viral infections are a frequent cause of facial palsy (Bell’s palsy), but a majority of such cases recover spontaneously. We also specialize in facial asymmetry surgery. Scores of patients have been rehabilitated after undergoing surgery in our hospital.

Initial Consultation at our Hospital

Dr. SM Balaji, facial cosmetic surgeon, examined the patient. He obtained a detailed history and spoke with the patient at length. Treatment planning was discussed with the patient. The mechanism of static suspension surgery was explained to him.

He was encouraged to ask questions and clear his doubts. Once all his questions were answered to his fullest satisfaction, he expressed understanding and consented to undergo surgery.

Surgery commenced with harvesting a fascia lata graft from the thigh. The incision was closed with sutures once the graft was harvested. Attention was next turned to the face. An elliptical incision was made over the nasolabial fold. Orbicularis oris muscle fibers were then identified.

The fascia graft was tunneled up to the zygomatic arch. The graft was then looped around the arch to form a circumzygomatic sling. Care was taken to ensure that there was no damage to any nerves or vessels.

Both ends of the fascia lata sling were then sutured to the orbicularis oris. There was a good improvement of facial symmetry following this procedure.  A lateral tarsorrhaphy was also performed as his cornea was getting ulcerated due to his inability to oppose the left eye.

The patient was very happy with the results of the surgery. He expressed his gratitude to the surgical team before discharge from the hospital.