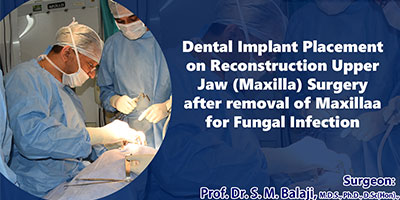 History of maxillary rhinosporidiosis with pain and drainage

This patient had been having undiagnosed pain and swelling for two years when he first came to our hospital. He had been referred here by a surgeon in his hometown after several doctors in various dental clinics had been unable to diagnose his condition. He even visited a few oral surgery implants clinics without any solution.

He was examined by Dr SM Balaji, oral and maxillofacial surgeon, who ordered a 3D CT scan and biopsy. Cultures of the biopsy specimen were done and revealed rhinosporidiosis infection of the maxillary sinus. Surgery was performed and all infected bone had been removed. This had lead to a maxillary bone deficiency.

There were no retained tooth roots and the health of the soft tissues were not compromised. Only two wisdom teeth were present in his mouth, his left mandibular third molar, which was impacted, and his right maxillary third molar. Dental work following surgery would be the placement of implants followed by dental rehabilitation with crowns. The patient complained of excessive daytime sleepiness, but there was no suspicion of sleep apnea.

The patient was advised to come back to the hospital after adequate healing of the maxillary surgical site. Bony rehabilitation of the lower and upper jaws is also treated by plastic surgeons. Principles of orthognathic surgery are not used in these cases although this is also corrective jaw surgery.

The patient presented after the surgical wounds had healed completely. A biopsy obtained from the maxilla revealed complete resolution of his maxillary rhinosporidiosis. Augmentation of his maxillary bone had been performed with bone grafting for placement of dental implants at a later date. The patient presents now for placement of dental implants.

It was Dr Per-Ingvar Branemark who first discovered osseointegration of titanium with bone. During the course of his research into factors that influence bone healing, he inserted titanium rods into rabbit leg bones. When he later tried to retrieve it, he discovered that the titanium rod had completely fused with the bone and the two had become indistinguishable. The structure of the bone was not affected in any way and bony strength to withstand stresses was also normal.

Advantages of dental implants over other dental prostheses

Titanium is very light and completely fuses with the bone. The joint between the bone and the titanium implant is virtually indistinguishable and very strong. It can withstand occlusal loads comparable to that of natural teeth. Constant research into dental implants has led to different implant designs to cater to individual patient needs.

The most common type of implant is the single tooth dental implant. The crown fixed to this type of implant can either be a single crown or a crown that is a part of a bridge. The number of implants used to fix a bridge depends upon various factors. Factors such as the amount of occlusal load the implant will have to bear determine this.

Different types of dental implants systems in use today

All on 4 implants utilize the placement of tilted dental implants for the rehabilitation of an entire arch. Placement of the teeth prosthesis, typically a bridge, can be done within 24 hours. It is very convenient for the patient and the postoperative recovery phase is the shortest for this implant. Patients thus rehabilitated are able to eat all varieties of food and the occlusal loads borne by these implants are equal to that of natural teeth.

Long-standing edentulous condition of the maxilla can lead to severe resorption of the maxillary bone. This can be to a degree that cannot support most implant systems. This lead to the development of zygoma implants. Dental implants are directly fixed to the zygomatic bone. The zygomatic bone is a very strong bone and serves as an ideal foundation to soak up occlusal forces that are exerted upon these implants.

Factors behind the long term success of dental implant surgery

The success rate of dental implants is very high. It ranges from 98% to 99.5%; however, it needs to be reiterated that the patient needs to take good care of the implants to enable long-term success of the implants. The habit of smoking greatly reduces the success of implant placement. The patient also needs to maintain meticulous oral hygiene with the use of aids such as dental floss and special mouthwashes that will be prescribed to the patient.