Fibrous Dysplasia of Zygoma and Orbit

Fibrous Dysplasia of Zygoma and Orbit 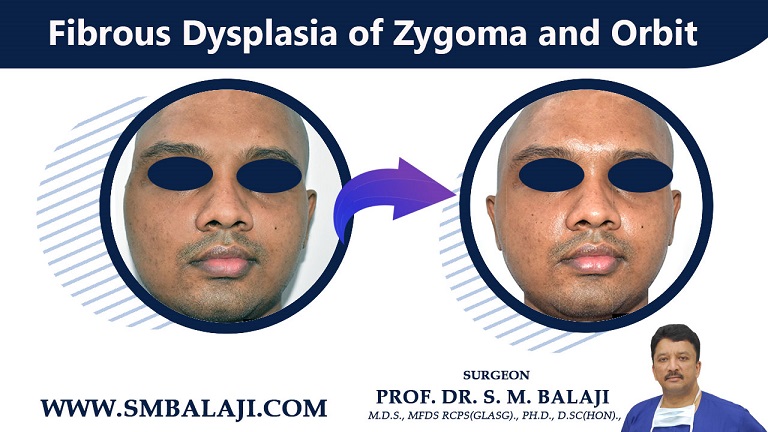 The patient is a 26-year-old man from Thalassery in Kerala, India. He has had a slowly progressing facial asymmetry for many years now. There was a gradually developing swelling of the right midfacial region.

A biopsy had been obtained and he had been diagnosed with fibrous dysplasia. He had chosen to ignore it as it was not causing him any functional difficulties.

Disfigurement caused by Fibrous Dysplasia and its Probable Etiology

It is thought to result from a genetic mutation at birth but is not hereditary. There is a dull ache in the region of the affected bone. Fractures are also common when it affects the limb bones. The only treatment available is the surgical removal of the fibrous tissue.

Patient Decides to Undergo Surgical Correction of his Deformity

The growth has now progressed to the point where it is causing self-esteem problems for the patient. He was beginning to avoid social interactions because of the extreme facial disfigurement. His parents researched the internet for the best hospital to get this addressed. They also made widespread inquiries regarding the same.

Our hospital is a premiere center for facial plastic surgery in India. Many patients have undergone facial cosmetic surgery and facial reconstructive surgery at our hospital. He and his parents zeroed in on our hospital for his fibrous dysplasia surgery.

Patients from around the world come to us for reconstructive plastic surgery and facial asymmetry surgery. We utilize advanced facial biometric systems for facial asymmetry correction. Facial implants can be utilized when there is a bony deficiency causing facial asymmetry.

Initial Consultation and Treatment Planning at our Hospital

Dr. SM Balaji, facial cosmetic surgery, examined the patient and spoke with him at length. Biopsies and imaging studies were ordered including CT scans. This revealed a diagnosis of fibrous dysplasia of zygoma and orbit along with the involvement of the temporal bone.

A 3D stereolithographic model of the patient’s skull was obtained. The fibrous overgrowth was studied and presurgical analyses were performed. It was then decided to proceed with surgery.

The affected regions of the zygoma and temporal bone were approached through a hemicoronal incision. No other approach would enable satisfactory removal of the fibrous tissue. Surgery progressed through dissection of the galea and temporal fascia. Care was taken to also preserve blood supply to the temporalis muscle to prevent any postsurgical atrophy.

The frontalis and orbicularis oculi branches of the facial nerve were protected throughout the surgical procedure. Dysplastic fibrous overgrowth was removed meticulously. Normal bony contour was established through the removal of the excess tissue. This would restore symmetry to his face.

The fascia was sutured with retraction of the temporal muscle after adequate removal. This was to ensure that there would not be a hollowed-out appearance to the region. The incision was finally closed with staples.

The patient and his parents were very happy with the results of the surgery. There was a tremendous improvement in the cosmetic appearance of the face. Improvement in the patient’s self-confidence was apparent shortly after surgery.

He and his parents expressed their total satisfaction with the treatment process at our hospital.