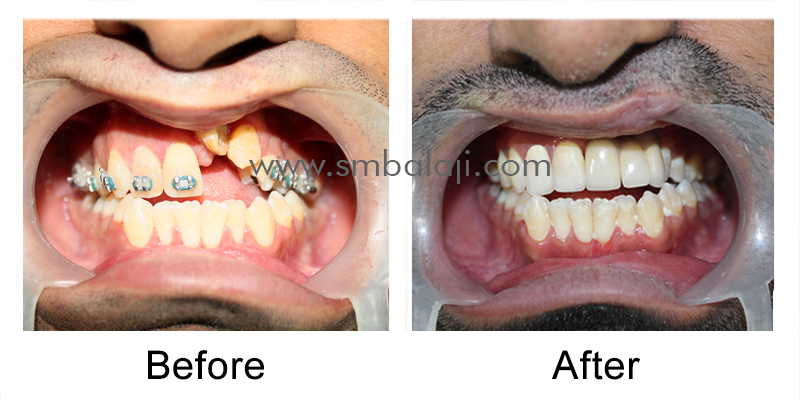 This is a case of a 19 year old male patient from Sri Lanka with unilateral cleft lip and palate. He had his primary lip repair done at the age of 3 months and palate repair at the age of 9 months by the esteemed Maxillofacial Surgeon, Dr.S.M.Balaji in our Hospital. Followed by this the patient had undergone cleft alveolar bone closure surgery elsewhere. Later the patient reported to our hospital seeking correction for his malaligned teeth. The severe malocclusion compromised his oral function and appearance. Patient explained about his difficulty to chew food and that he was experiencing a stutter. The Sri Lankan patient was put under orthodontic treatment for correction of severe malocclusion.

The orthodontic treatment was a success. The braces aligned his teeth and a proper occlusion was brought. But, the patient’s upper front teeth were severely rotated and mobile to be aligned orthodontically.

OPG (full mouth x-ray) and CBCT image (cone-beam computed tomography) taken revealed rotated upper left anterior teeth. There was incomplete root formation of the teeth. There was a significant amount of bone defect at the related site. Also the left lateral incisor seemed to be genetically missing. This deficient bone at that site indicated that the teeth cannot be corrected by orthodontic treatment. A thorough blood investigation revealed no underlying systemic abnormalities.

Complete radiological and dental evaluation of the patient was carried out. Patient was particular that he wanted a permanent solution for his problem. Alternative treatment like root canal followed by ceramic bridge placement was also explained. Yet the patient specifically demanded for Dental implants. Hence considering the patient’s age and need, maxillofacial surgeon and Implantologist, Dr.S.M.Balaji, planned to extract the related teeth followed by bone graft under general anesthesia and later Dental implant placement.

In case of cleft bone defect, Autogenous graft (bone obtained from the same individual receiving the graft) taken from extraoraldonar site like chest (rib bone) or iliac bone (hip bone ) is usually used for closure of the defect. Since the bone defect is small, the amount of bone required to close the defect is only needed in a small proportion. Hence, the bone graft was planned to be harvested from the patient’s mandibular symphysis (chin bone) intraorally. Despite, recent advances in bone grafts and bone-substitute technology, Autogenous grafts have always been regarded to be the “gold standard” due to its properties and absence of immunological reactions. The thick symphyseal bone reduces resorption and helps in bone regeneration. The patient was clearly explained about the surgical procedure and consent was obtained.

Before the surgery, preparation of the patient was done. Under general anesthesia, a full thickness gum tissue is raised in relation to the lower symphysis region. A small part of a bone was cut and taken out from the chin region .The bone graft is then kept in a saline medium. Closure of the gingival tissue in the lower jaw is achieved with dissolvable suture.

Followed by this, a full thickness gum tissue is raised in relation to upper left anterior teeth. Dr.S.M.Balaji extracted the crooked teeth without damaging the surrounding structures. The autogenous bone graft is fixed in the bone defect by means of screws. The gingival tissue is then approximated with dissolvable suture.

Patient was given a provisional prosthesis for a healing period of 3 months. Over a period of time the symphyseal bone rapidly regrows without altering the natural shape of the relative site. Hence there was no change in the soft-tissue contour of chin. Complete integration of the bone graft with the jaw bone was obtained.

Bone formation at the grafted site was satisfied. Dental implant placement at the relative site under local anesthesia was planned. The gum tissue surrounding the upper left anteriors were raised. Implantologist ,Dr.S.M.Balaji, placed the Dental Implants in relation to 21,22 & 23 with utmost precision. Once the implants are in position cover screw is placed onto the implant. The gingival tissue is then closed with dissolvable suture.

The patient had to wait for a healing period of 3 more months for the Implant to completely osseointegrate with the jaw bone. Patient continued on with the removable prosthesis. Post operative OPG showed well positioned, osseointegrated implants at the related site. The patient was given a fixed ceramic prosthesis over the implants. Bite equilibration was achieved. The patient was overjoyed to have a complete smile makeover using dental implants. Also stated that he experienced an immediate change in his speech after placement of the prosthesis. Patient had been on regular follow up over a period of 2 years.