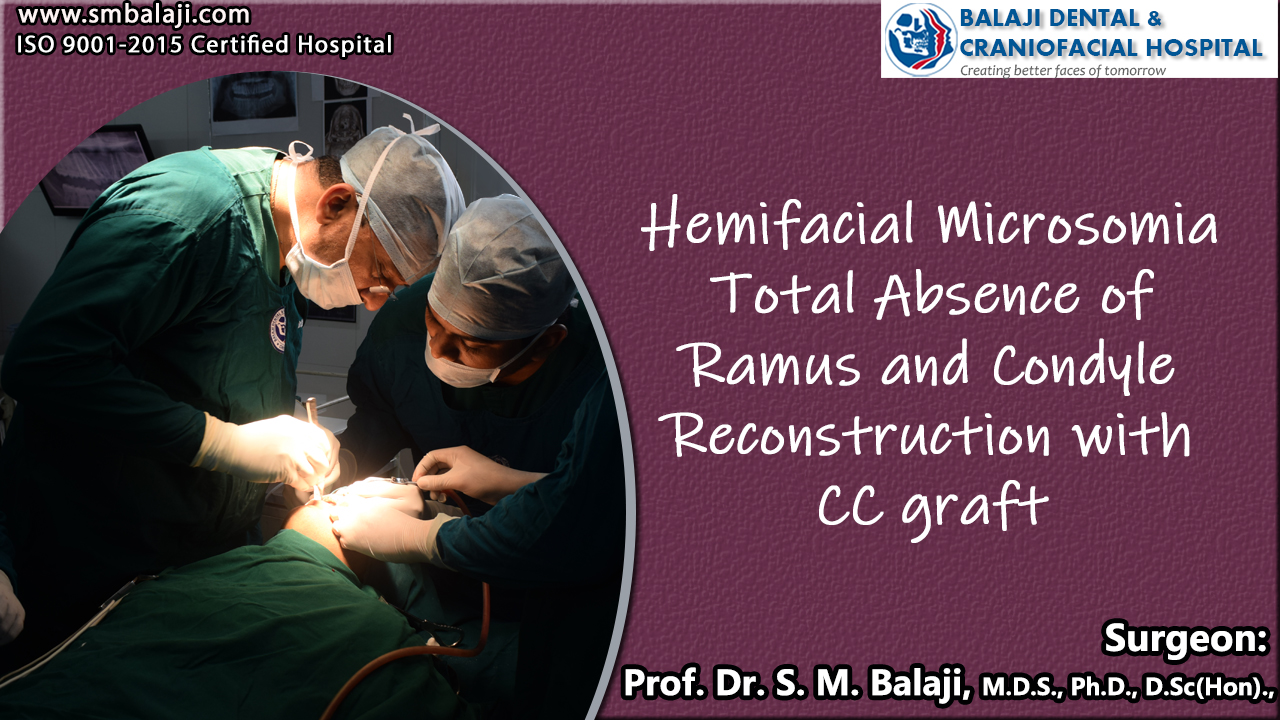 The patient is a 7-year-old female from Gorakhpur in Uttar Pradesh, India. She had been born with the absence of a left ramus and condyle of the mandible. The patient also had microtia along with absence of a left orbital globe. The asymmetry of her face worsened as she grew up. She was getting more and more depressed with the passage of time and was facing a lot of bullying at school. This worsened to the point where she refused to go to school. She had already undergone placement of an eye prosthesis to replace her missing left orbit.

Her worried parents met with a local oral surgeon to seek advice regarding correction of her condition. The surgeon explained the complexity of treatment involved in the correction of hemifacial microsomia to the parents. He said that hemifacial microsomia surgery was performed only in a few specialty hospitals in India. The surgeon then referred them to our hospital for facial asymmetry correction surgery. Our hospital is one of the premier centers for facial cosmetic surgery in India. We are also one of the leading oral and maxillofacial surgery hospitals in India. Dr SM Balaji, our director, is a top cosmetic surgeon in India.

Board certified oral and maxillofacial surgeons perform this surgery in the developed countries.

A brief introduction into hemifacial microsomia

Hemifacial microsomia (HFM) is a congenital disorder that predominantly affects the development of the lower half of the face. It most commonly affects the ears, the mouth, and the mandible. It usually occurs on one side of the face through it may rarely involve both sides. If severe, it may result in breathing difficulties due to obstruction of the trachea—sometimes even requiring a tracheotomy.
It is the second most common birth defect of the face after cleft lip and cleft palate. Hemifacial microsomia shares many similarities with Treacher Collins syndrome, Franceschetti syndrome etc. Patients with hemifacial microsomia exhibit varying degrees of facial asymmetry. It can range from very mild to very severe. Correction of the facial asymmetry is very important for patients to gain self confidence to become productive members of society.
One of the aims of this surgery is to establish as much facial symmetry as possible. Once correction of the ramus and body has been completed, soft tissue molding leads to better symmetry of the face. Plastic surgery in India has become a highly evolved field now. Reconstructive surgery performed by plastic surgeons deal with a wide variety of surgical procedures. Facial implants are also used to help in establishing better symmetry.

Dr SM Balaji, hemifacial microsomia surgeon, examined the patient thoroughly following which he then ordered comprehensive imaging studies including a 3D CT. Imaging studies revealed that there was absence of condyle and coronoid on the left side along with the presence of a hypoplastic ramus. This had resulted in the development of a considerable occlusal cant. The patient also had microtia on the left side. Correction of this defect was advised to be carried out at around the age of 14 years old.
It was explained to the patient that she would need to undergo a ramus distraction osteogenesis for correction of her facial asymmetry. However, there was insufficient bone present to perform a successful distraction osteogenesis. Therefore, a costochondral rib graft would be harvested to create a condyle and reinforce the ramus, thus creating sufficient bone for distraction surgery

Under general anesthesia, a right inframammary incision was first made and a costochondral rib graft was harvested through the opening. A Valsalva maneuver was then performed to ensure that there was no perforation into the thoracic cavity. The wound was then closed in layers. Following this, a left submandibular incision was placed and dissection was performed up to the condyle. The coronoid process was then created and the ramus augmented using a costochondral rib graft, which was fixed in place using titanium screws. Closure was then done using resorbable sutures.

Happy patient after successful outcome of the surgery

The surgery was a complete success. The coronoid was successfully created and ramus was augmented. A follow up OPG taken three months postoperatively revealed that there was sufficient bony consolidation in the area of the surgery. The patient also had a more symmetrical face. Distraction osteogenesis surgery will be performed after a period of about six months followed by ear reconstruction after attaining sufficient growth.