Hemifacial Microsomia – Reconstruction of Ramus and Condyle by costochondral Graft

Hemifacial Microsomia – Reconstruction of Ramus and Condyle by costochondral Graft 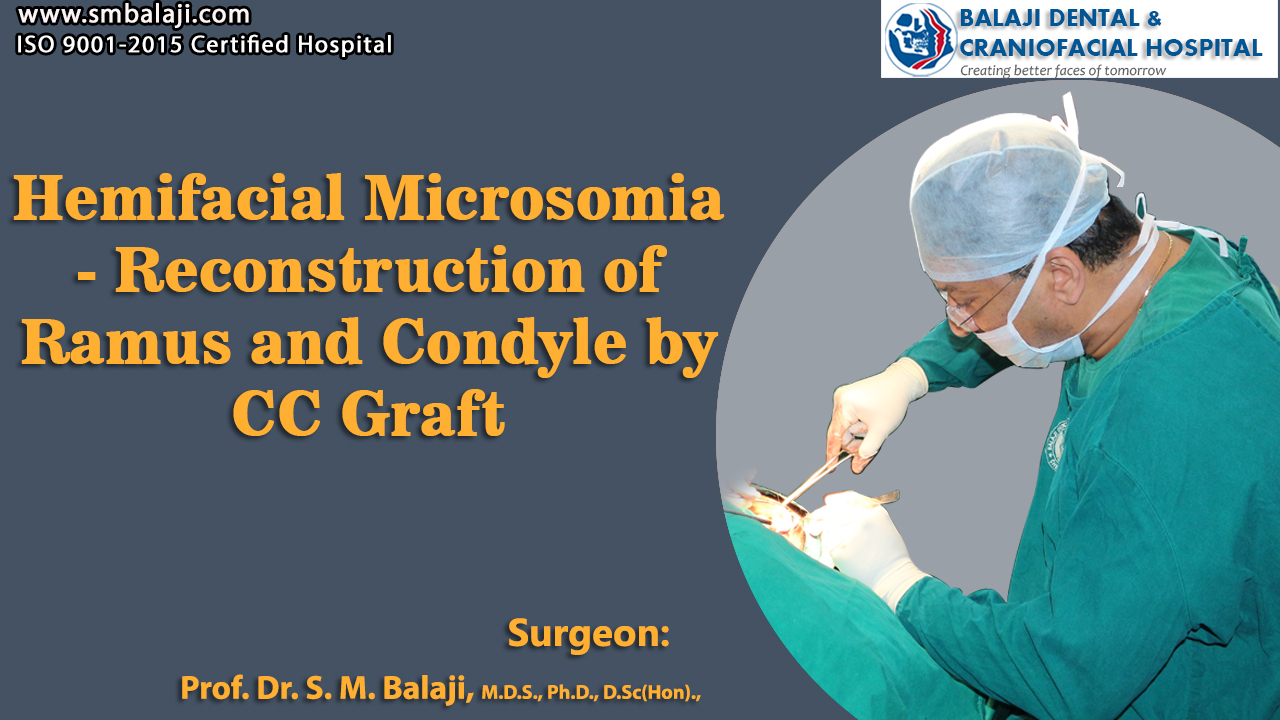 The patient is an 8-year-old boy from Meerut in Uttar Pradesh, India. His parents had begun noticing a developing facial asymmetry as he grew up. It has now reached the point where it is very visible and this has greatly distressed his parents. The patient too has been facing a lot of bully at school and does not have many friends. They had approached a local doctor who had explained to them that their son had hemifacial microsomia. He had further explained the treatment protocol for hemifacial microsomia and had referred them to our hospital for treatment.

What is hemifacial microsomia?

Hemifacial microsomia is a congenital disorder that affects the development of the lower half of the face. It most commonly affects the ears, the mouth, and the lower jaw. It mainly manifests on only one side of the face, but may rarely involve both sides. When hemifacial microsomia is severe, it may cause breathing difficulties from tracheal obstruction. This may even require a tracheotomy. It is the second most common birth defect of the face after cleft lip and palate. Incidence rate is one out of every 3500 to 4500 live births.

Children born with hemifacial microsomia could face difficulties at school and at social settings. Their facial features are perceived as being different. This could lead to a sense of isolation and loneliness in these children. Parents too need counseling to overcome feelings of despair and depression. Improper handling of these children during the growing years could lead to permanent psychological scarring.

Common features seen in this condition

The affected side has the appearance of facial paralysis. However, there is no involvement of the facial nerve. Soft tissue disfigurement is a prominent feature of this condition. The lower areas of the face are mainly affected. Microtia too is a common feature. Cleft lip and cleft palate are not associated with this condition. Orthognathic surgery could be required to correct the jaw deformity. Craniofacial centers specializing in reconstructive surgery are well equipped to handle these cases. Correction of drooping corner of the mouth is performed by reanimation surgery using fascia lata grafts.

Initial presentation at our hospital for hemifacial microsomia treatment

Treatment planning explained to the parents

Successful surgical creation of condyle on the right side

Under general anesthesia, a right inframammary incision was made and a costochondral rib graft was harvested. A Valsalva maneuver was then performed to ensure that there was no perforation into the thoracic cavity. The incision was then closed in layers with sutures. Next, a right submandibular incision was made and dissection was done up to the condyle. The coronoid was created and the ramus was augmented using the costochondral rib graft, which was fixed using titanium screws. Closure of the wound was then done using resorbable sutures.

The surgery was a complete success. Coronoid was successfully created and ramus was augmented. A postoperative OPG taken after 3 months revealed sufficient bone consolidation. The patient now had a more symmetrical face. It was explained that the patient needed to return in six months for distraction osteogenesis. That would then be followed by reconstruction of the patient’s ear after sufficient growth has occurred. Correction of facial deformity greatly benefits patients suffering from hemifacial microsomia.