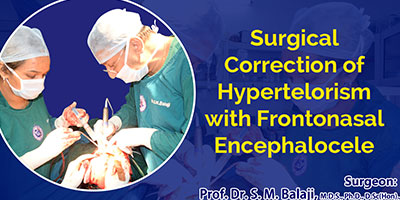 Patient born with craniofacial deformities and cleft lip and palate

This young man is from Ambala, Punjab. He had been born with marked craniofacial deformities and a cleft lip and palate. Cleft lip and palate repair performed as an infant were satisfactory. His marked nasal deformity had resulted in hypertelorism. There was also soft tissue scarring. His parents’ search for the best craniofacial surgeon for hypertelorism in India had led them to our hospital. Our hospital is well known for hypertelorism surgery in India. Orbital hypertelorism surgeries are a division of facial reconstructive surgery. We are one of the best for facial reconstructive surgery in India. These surgeries are also performed by plastic surgeons in EU nations.

Treatment plan explained to the patient and his parents in detail

Dr SM Balaji, Craniofacial deformity surgery specialist, examined the patient. The neurosurgical team assisted throughout this process. A 3D stereolithographic model was first obtained of the patient’s skull. A detailed study was then conducted followed by a mock box osteotomy procedure. Once the treatment plan decision had been made, this was then explained to the patient. The patient and his parents consented to surgery.

Under general anesthesia, a lumbar puncture was first performed and CSF drain placed. This was to ensure adequate control of intracranial pressure. A bicoronal flap was then raised. Following this, a craniotomy was then performed 2 cm above the supraciliary arches. The posterior cut was anterior to the coronal sutures. The squamous part of the frontal bone then removed and preserved for later placement. The frontal lobe of the brain was then exposed and around 60 mL of CSF drained. This was to decompress the brain for better surgical access. This aided in retraction of the frontal bone from the floor of the anterior cranial fossa.

An osteotomy was then done parallel to the craniotomy cut to create the frontal bar. Temporalis muscle retraction aided in visualization of the inferior orbital fissure. This was then followed by bilateral osteotomies of the zygomatic arches. A transverse osteotomy was then done across the roof of the orbit. Final maxillary Le Fort I osteotomy through intraoral incisions resulted in complete disengagement of the midface. Bone was then removed from the lateral and medial regions of the orbit. Careful positioning of the bone resulted in correction of the hypertelorism. The repositioned bone segments were then stabilized with plates to the frontal bar. Intraoral incision was also closed with sutures.

Treatment plan for closure of frontonasal encephalocele discovered during surgery

A frontonasal encephalocele had been discovered during this stage of the surgery. There was congenital absence of duramater in this region. This could result in herniation of brain tissue at a later date. The neurosurgical team advised closure of this cavity with fat graft.

A fat graft was thus obtained from the patient for this purpose. This incision was then closed with staples. A layer of fat graft was first laid over the opening. The fat graft was next covered with fibrin glue followed by another layer of fat graft. This resulted in complete closure of the defect in the bone. The bony segments of the skull were then placed back into correct position. These segments were then fixed in position with four holed plates. The bicoronal flap was then stapled back into position.

Successful completion of the first stage of the patient’s rehabilitation

This completed the first stage of the patient’s surgical correction. The second stage would involve correction of the nasal deformity. The patient recovered well from surgery and was then discharged home.