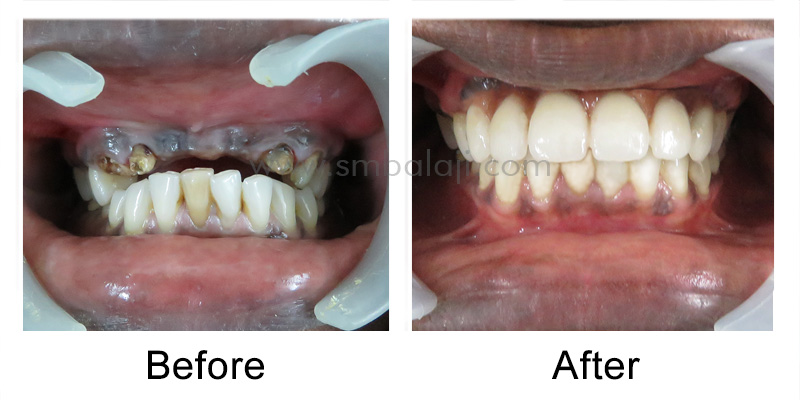 A 32 year old school teacher from Andhra Pradesh, India approached our Dental Hospital seeking for a fixed replacement of her missing teeth. The patient gives a history of road traffic accident 5 years back. She experienced a traumatic fall which had knocked out her upper front teeth. In order to hide her dental defect, for the past 3 years patient was using the dental bridge given elsewhere after root canal treatment of the adjacent teeth.

The patient complained that the dental bridge often got dislodged which hampered her speech and function. This eventually led to bad breath due to food getting stuck in between the bridge and the gums. Also, the patient stated that there was intermittent pain in her upper front teeth which increases on chewing. This affected the patient’s quality of life. She felt too timid to speak and smile. She was in need of a permanent solution to get back her good old smile.

Treatment options like re-RCT of the teeth followed by traditional bridge was explained to the patient. However the patient was concerned and was not willing to go through the same process again. Also she was doubtful of its longevity. Hence considering the patient’s age and demand for a permanent fix, Dental Implants were opted.  Dr.S.M Balaji, renowned Maxillofacial Surgeon and Implantologist, intended to place dental implants after extraction of the failed root canal treated teeth under local anesthesia. Patient’s consent was obtained.

Under local anesthesia, Dr SM Balaji extracted the broken teeth on either side of the upper arch. Following this, the gum tissue surrounding the corresponding site was raised exposing the underlying bone. Dental Implants of appropriate height were then placed in the empty tooth socket with stability. The implanted site was thoroughly irrigated with saline solution and closed with dissolvable suture.

The patient was given medications for 5 days to cope with the mild swelling which eventually subsided. During the intervening time, a self cleansing provisional prosthesis was given to replace the missing teeth.

It took a course of 3 to 4 months for the Dental Implants to completely integrate and harmonize with the jaw bone. Post operative OPG taken revealed well positioned dental implants in chime with the jaw bone. Subsequently, final bite trials were done. A natural looking, well-fitting fixed prosthesis was placed onto the implants in the upper jaw. The patient’s look elevated instantly. Her insecurities ceased! The prosthesis blended well with the adjacent natural teeth. She walked out with a dazzling smile! Patient is on a regular follow-up.