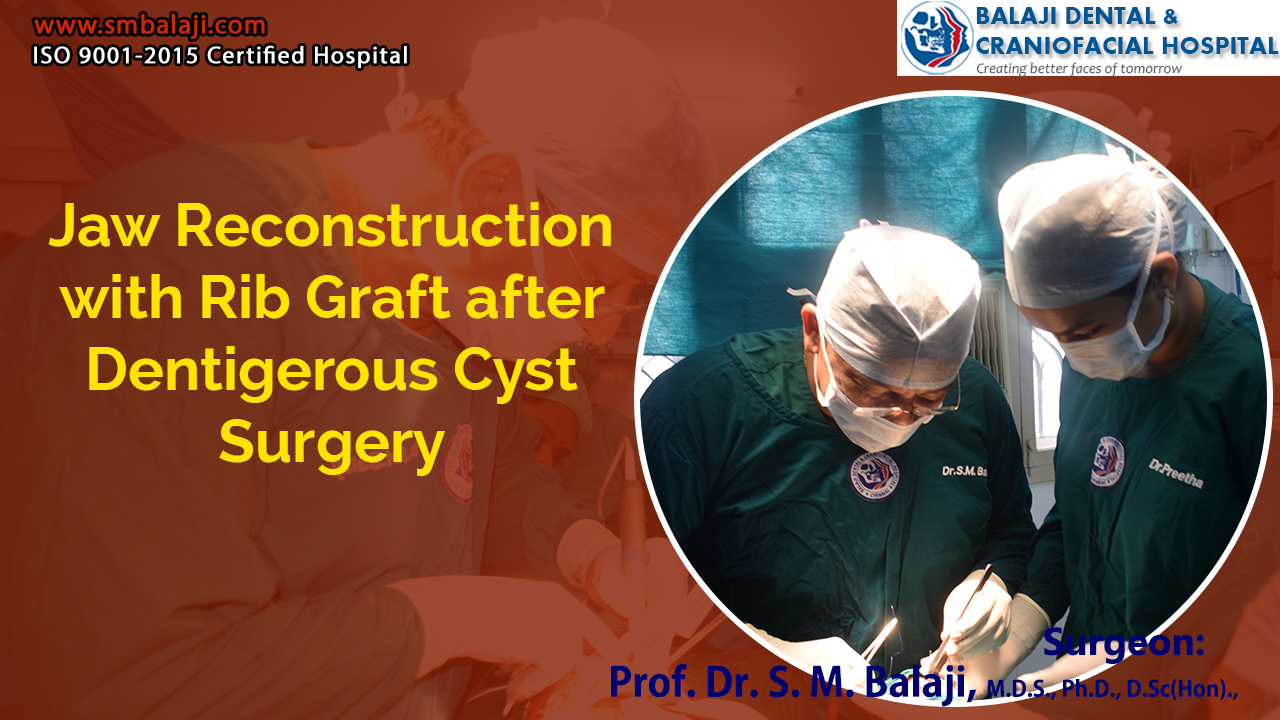 Patient with pain in her right mandibular first molar

The patient is a 21-year-old girl from Kottayam in Kerala, India. She had started noticing a swelling on the left side of her mandible over the last few months. Pain had also developed along with the swelling. This had rendered her unable to chew anything. Her taste sensation had also become altered along with the other presenting symptoms.

Her parents had become very alarmed by this development. Upon consultation with their family doctor, he had referred them to come to our hospital. He explained to them that our hospital was the premier center in India for treatment of jaw cysts.

Initial presentation at our hospital for diagnosis and treatment

Dr SM Balaji, jaw reconstruction surgeon, examined the patient. He then ordered comprehensive imaging studies including an OPG and a 3D CT scan. This revealed a cystic lesion in the left posterior mandibular region, which extended well into the ramus region. A biopsy was obtained from the cystic lesion, which revealed it to be a dentigerous cyst.

Treatment planning explained to the patient in detail

It was explained to the patient that the cystic lesion needed to be enucleated in toto. The patient was also informed that the bony defect that would result from the surgery would have to be reconstructed. It was further explained that rib grafts harvested from the patient would be used for the jaw reconstruction surgery.

Dental implants would then be placed after complete bony consolidation of the bone grafts with the mandibular bone. This would be followed by placement of crowns after osseointegration of the dental implants with the surrounding bone. The patient discussed this with her parents and signed the informed consent for the surgery.

What is a dentigerous cyst?

A dentigerous cyst is an odontogenic cyst, which is associated with the crown of an unerupted or partially erupted tooth. Based on radiological presentation, dentigerous cysts can be classified into central type, lateral type and the circumferential type.

Surgical enucleation of the dentigerous cyst

Under general anesthesia, a right inframammary incision was made and costochondral rib grafts were harvested. This was followed by a Valsalva maneuver to ensure that there was no perforation into the thoracic cavity. The incision was then closed in sutures.

A crevicular incision was next made in the left mandible followed by elevation of a mucoperiosteal flap. This was followed by extraction of the three left lower molars. Complete cyst enucleation was then performed and electrocautery was applied followed by antibiotic flushing.

The resultant bony defect was then packed with rib grafts, which were contoured to fit into the defect. These were then fixed with titanium screws and the flap was closed with sutures.

The patient and her parents were extremely relieved after the successful completion of the surgery. They were very happy that the dentigerous cyst had been treated with such good results. It was explained to them that they would need to return in a three months for dental implant surgery.

Artificial teeth would be fixed to the dental implants. This would offer complete rehabilitation after the surgery. This would be in the form of a fixed ceramic bridge. Removable dentures are normally not advised for patients. Maintenance of gum tissue health is imperative for success of dental implants.