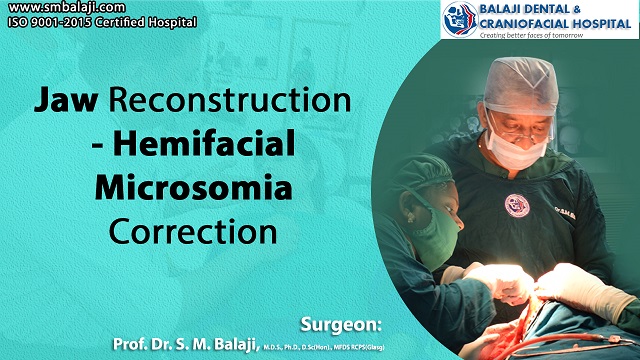 The patient is a 7-year-old female from Hastinapur in Uttar Pradesh, India. She had a minor degree of facial asymmetry at birth. This gradually worsened with age. It soon became apparent to her parents that there was an abnormality underlying her condition.

Worried over the turn of events, when she was around three years old, they had taken her to a local hospital.

Hemifacial microsomia explained to allay fears of the parents

The process causing hemifacial microsomia usually begins by the first trimester. It is still unclear as to the exact cause behind this condition. One probable cause could be disruption of vascularity to the face of the developing fetus. Though it usually manifests unilaterally, it can also occur bilaterally.

No external causes have been identified that lead to hemifacial microsomia. These include mother’s diet, metabolic conditions like diabetes or other such factors.

Parents were extensively counseled regarding the condition. It was explained to them that she had unilateral hemifacial microsomia, which involved her left lower face. There was also a minor deformity to the pinna of the left ear. They were informed that this would require cosmetic ear surgery at a later date.

Patients with hemifacial microsomia do not have prominent ears. Plastic surgeons perform ear reconstruction in most western countries.

The parents were advised that surgical correction of the deformities would be required for the patient at the appropriate ages. This would also include reconstruction of the affected side of the mandible.

Parents decide to seek consultation for correction of facial deformity

Deciding to get her condition corrected surgically, parents made widespread enquiries regarding the best surgeon to address this problem. They finally decided to come to our hospital for surgical management. Our hospital is a specialist craniofacial center with a dedicated craniofacial team.

Our hospital is a renowned center for facial asymmetry correction. Facial asymmetry arising from varied causes such as cancer, trauma and congenital causes are corrected surgically in our hospital. Facial reconstructive surgery is a specialty feature that has won accolades through our craniofacial program.

Initial presentation at our hospital for treatment of hemifacial microsomia

Dr SM Balaji, hemifacial microsomia surgery specialist, examined the patient and obtained comprehensive imaging studies including a 3D CT scan. This revealed that ramus and condyle were missing on the left side. There was no TMJ structure present. The patient had deviation of the mandible to the left side.

A comprehensive treatment plan was formulated and explained to the patient’s parents. It was explained that distraction osteogenesis cannot be performed due to insufficient bone. A costochondral rib graft with perichondrium would be harvested from the patient.

Harvesting with the perichondrium would enable lengthening of the ramus through growth as the patient grows up. In case growth of the ramus does not occur, ramus lengthening surgery through distraction osteogenesis would be performed.

The patient would also need TMJ reconstruction surgery at a later date. Parents expressed understanding of the treatment plan and consented to surgery.

Under general anesthesia, an inframammary incision was made and a costochondral rib graft was harvested. This was followed by a Valsalva maneuver to ensure that there was no perforation of the thoracic cavity. The incision was then closed in layers with sutures.

Attention was next turned to the left ramus region of the mandible. An incision was made to expose the underdeveloped left ramus. The mandible was then pulled down and the costochondral graft with perichondrium affixed to the posterior ramus using titanium screws.

This resulted in improvement in facial symmetry for the patient. The wound was then closed with sutures.

It was explained to the parents that the patient would require further surgeries for complete rehabilitation of her facial deformity. Parents expressed understanding of the information and expressed their thankfulness before final discharge from the hospital.