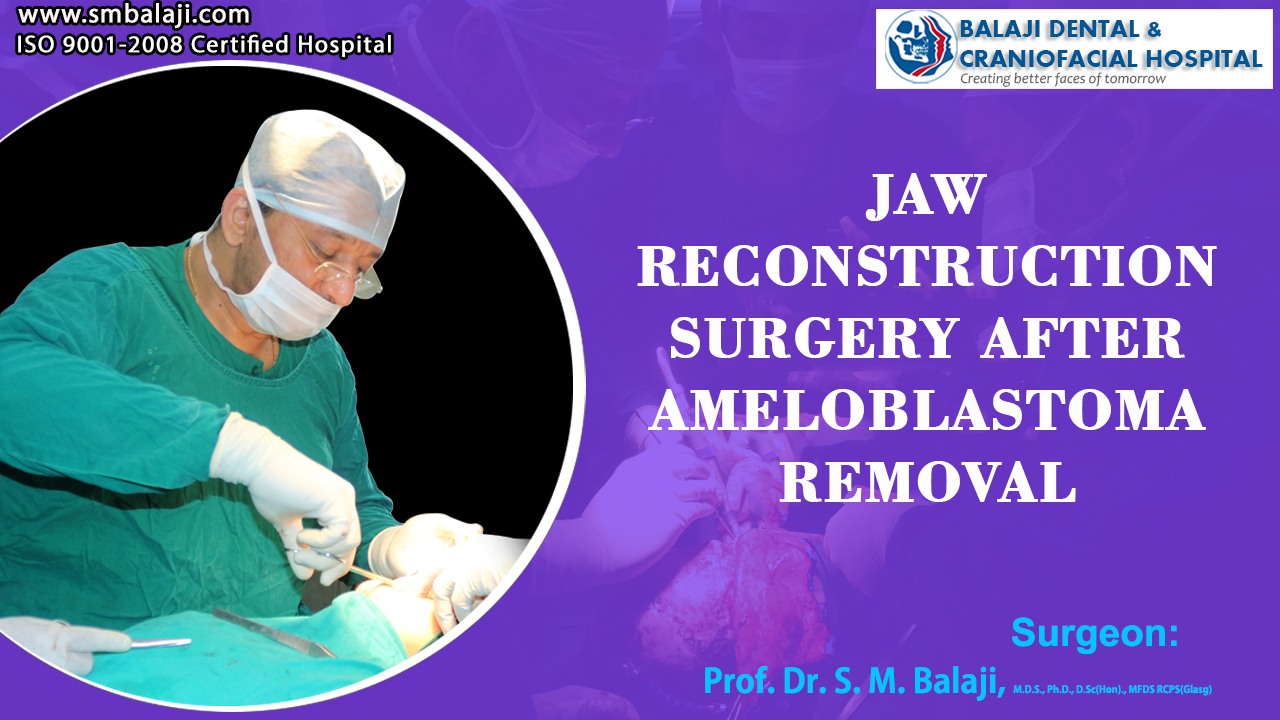 The patient is a 33-year-old patient from Indore in Madhya Pradesh, India. He had been diagnosed with ameloblastoma around four years ago. Surgery had been advised for him and he had then undergone ameloblastoma mandibular resection.

This had been followed by mandibular reconstruction with a titanium plate and screws. The surgery had been performed at a nearby city. Bone grafts had been used to rebuild the mandibular bone.

The patient however was not happy with the results of the surgery. He mentioned that his jaw bone seemed to be very deficient and implants could not be placed. Eating and speech have been difficult since this surgery. This had caused a compromise in the quality of daily living and he had wanted to get this addressed.

Patient referred to our hospital for surgery by many specialists

The patient had made enquiries regarding the best hospital to undergo jaw reconstructive surgery. He had been referred to our hospital by multiple sources. Our hospital is a renowned center for jaw reconstruction and other complex surgeries. We also perform dentigerous cyst surgery, odontogenic keratocyst surgery, hemifacial microsomia surgery, etc.

Large cysts are enucleated followed by jaw reconstruction at our hospital. Ear reconstruction for microtia is a specialty surgery performed in our hospital. Orthognathic surgery for jaw size discrepancies has rehabilitated scores of patients. Dental implant surgery followed by placement of artificial teeth is done using Nobel Biocare implants and Zirconium/ceramic crowns.

Remodeling of gum tissue through laser gum surgery offers good esthetic and functional results at our hospital. All this is enabled through the application of the latest state of art technology.

He presented with a complaint of a mandibular defect. The patient mentioned that his jaw was very thin and that he was unable to bite or chew on foods properly. He wanted to correct his jaw and replace his teeth as soon as possible.

Initial presentation at our hospital for mandibular reconstructive surgery

Dr SM Balaji, jaw reconstruction surgeon, examined the patient and obtained a detailed history. He then ordered for radiological studies including a 3D CT scan. This revealed that the patient had deficient bone at the site of the mandibular reconstruction plate. The anterior mandibular bone was very thin and insufficient to support placement of implants.

Occurrence of ameloblastoma and treatment modalities

Ameloblastoma is a rare, benign or cancerous tumor of the odontogenic epithelium, which are more common in the mandible. This was initially known as adamantinoma and was renamed in 1930 by Ivey and Churchill. They are rarely malignant or metastatic, but can lead to severe disfigurement due to gradual growth.

Surrounding healthy bone is also destroyed by this lesion. Hence, a wide surgical excision of surrounding tissues is required to treat this disorder. If left untreated, it could potentially obstruct nasal and oral airways making it impossible to breathe without oropharyngeal intervention.

It was explained to the patient that rib grafts needed to be harvested to reconstruct the bony defect in his mandible. Dental implant surgery would be performed after consolidation of the grafts with the mandibular bone. The patient was in complete agreement with this treatment plan and consented to surgery.

Under general anesthesia, a right inframammary incision was made and a costochondral rib graft was harvested. This was followed by a midcrestal incision placed in the anterior mandible. A flap was then elevated and dissection was made down to the site of mandibular resection. The previously placed mandibular reconstruction plate and screws were removed.

Segments of the bone graft were then crafted to recreate good mandibular form. The mandible was then reconstructed using the shaped rib graft and titanium screws. Hemostasis was then achieved and closure of the incision was done with sutures.

There was good recreation of mandibular form after surgery. The mandible had been reconstructed to its previous dimensions. The surgery was successful with no complications. Patient recovered completely following surgery.

It was explained to the patient that implants would be placed after consolidation of the grafts. He was instructed to return in 3-4 months for placement of dental implants.